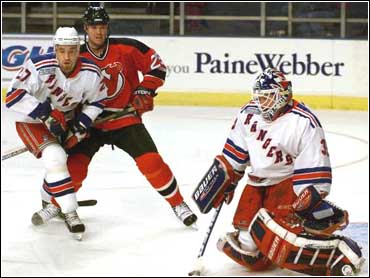 Patrik Elias made sure the New Jersey Devils mastery over the New York Rangers would not come to an end.

Elias scored a goal and assisted on another Wednesday night as the New Jersey Devils stretched their unbeaten streak against New York to 17 games, 3-1 over the Rangers.

"It was an an emotional game against the Rangers," Devils goalie Martin Brodeur said. "We'll see how we do playing three games against them in eight days."

The teams will meet again at Madison Square Garden next Tuesday before playing at New Jersey on Wednesday.

Elias set up Jason Arnott for his 15th goal at 14:32 of the third period, sending a cross-ice pass from the left boards to Arnott, who stuffed the puck past Rangers goalie Mike Richter.

"We had a 3-on-2 going in and a good pass sucked the defense to my side and Arnott finished good," Elias said.

The loss was an emotional setback for the Rangers, who lost for the third time in four games after a season-best seven-game winning streak.

"We deserved better than that," Rangers defenseman Mathieu Schneider said. "We didn't have any letdowns. I thought the goals they had were bad breaks. It was just a really tough loss."

Adam Graves gave New York a 1-0 lead 2:08 into the seond when he converted a goal-mouth pass from Theoren Fleury for his 17th goal. Graves beat Devils defenseman Sheldon Souray to the spot directly in front of Martin Brodeur and deposited Fleury's crisp pass into the open side of the net.

Elias made it 1-1 at 12:23 of the second on a counter play. With the Rangers pressing in the New Jersey zone, Brian Rafalski chipped an outlet pass, springing Elias down the left side on a breakaway. Elias beat Richter with a wrist shot for his 22nd goal.

"We played desperate at the beginning of the game," Rangers forward Theoren Fleury said. "Sometimes bounces don't go your way."

Claude Lemieux put New Jersey ahead 2-1 at 19:04 of the period with his 18th goal. Lemieux intercepted the puck in the Devils end, took it all the way up ice behind the New York net, then banked in a shot from behind the net off the skate of Rangers defenseman Kevin Hatcher.

"That was just luck," Lemieux said. "I threw it in front and it went in. Any time you take it to the crease something can happen."