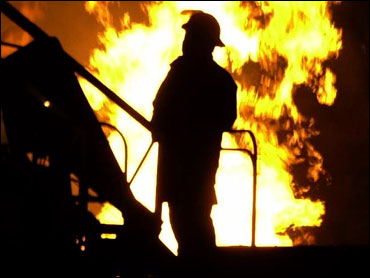 A pregnant woman and her three children died Monday in a fire that was apparently sparked by an unattended barbecue grill and destroyed their house and scorched two others, a fire official and neighbors said.

Firefighters were called to the scene about 12:45 a.m. and found the home engulfed in flames, according to Detroit fire department dispatch. Department spokeswoman Katrina Butler said the fire was classified as accidental, but there were no working smoke detectors in the house.

"It was a result of an earlier barbecue grill on the rear porch," Butler said.

Neighbor Julie Cline said another neighbor kicked in a door at the family's home and helped others pull out the children's father. She said neighbors tried to go back inside for other family members, but the flames were too intense.

Butler said the father was hospitalized in critical condition with burns over about 80 percent of his body.

Butler said the children were a 3-year-old boy and two girls, ages 5 and 7. She said the parents were in their mid-20s to early-30s, but their exact ages weren't known.

Cline said the woman was about eight months pregnant and the man recently had been renovating the house.

"They were a good family," Cline said.

Ron Andrews, 43, lives a few houses down the block and helped the man from the house. As Andrews spoke, his lips quivered and he fought back tears as he coughed from the smoke.

"We tried to get in there," Andrews said. "They were screaming, and we couldn't get in there."

Both stories of the home were charred, and the windows were broken out, making it possible to see into the backyard from the front of the home.

Someone placed a stuffed animal on the front-porch steps.