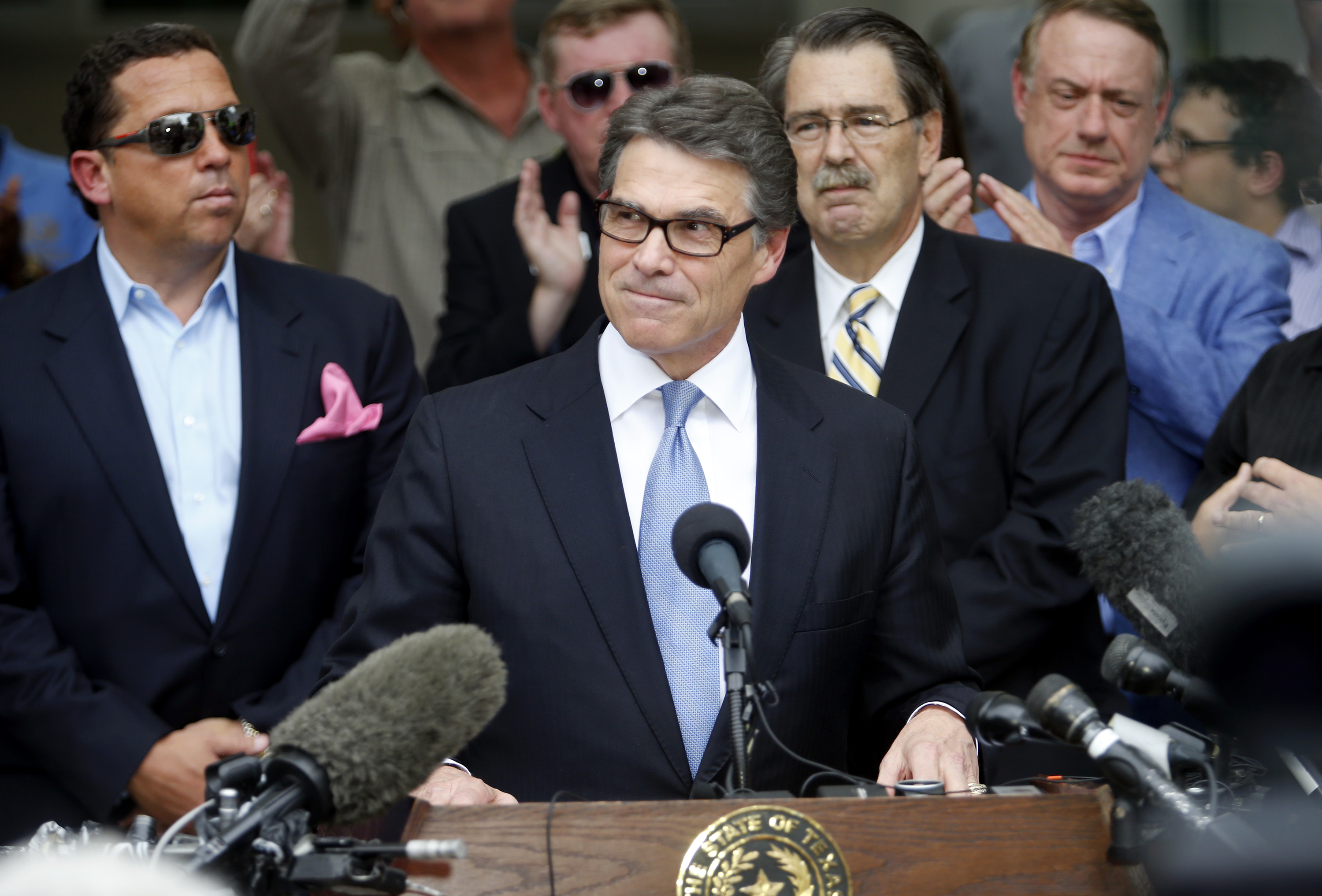 It's been less than a week since Gov. Rick Perry, R-Texas, was indicted on two felony counts of abuse of power, but take one look at his schedule and you'd have no idea.

On Thursday, Perry traveled to Washington, D.C., to pontificate on the immigration crisis at the southern border and the ongoing conflict in Iraq. Friday and Saturday, he'll attend six different events across New Hampshire to talk jobs and rally Republican voters ahead of the midterms. And just a few days later, he heads to South Carolina - another early primary state - to attend the Texas A&M v. University of South Carolina football game and "Victory Tailgate" fundraiser for the state's Republican Party.

It's a far cry from the Perry who entered the 2012 presidential campaign late in the game to great fanfare and expectations, only to flame out less than three months later with a debate gaffe for the ages. This Perry- who isn't officially running for president but has made no secret he's considering it - is laying the groundwork far earlier than he did in 2011.

"Perry has admitted that running for president is an extremely large challenge and I think voters here are willing to give him a second chance," South Carolina Republican Party Chairman Matt Moore told CBS News.

"He learned a lot about how to run for president from the 2011-2012 experience," Ray Sullivan, Perry's chief of staff and communications director during the 2012 campaign, told CBS News. "We collectively were not prepared and we did not go into that process as informed and educated as he is today."

Luckily for Perry his indictment actually seems to have brought a wave of positive attention, giving him a bit of a boost among Republicans in critical early presidential primary states.

Perry's New Hampshire adviser, Mike Dennehy, said that since the indictment was handed down, the number of people who have signed up to attend events has "gone through the roof."

Part of Perry's rebuilding process involves beefing up his foreign policy credentials, as evidenced by his comments regarding ISIS Thursday. He tied it into an area of expertise he has - immigration - by warning that Islamic militants may have already entered the U.S via the Mexican border.

Perry has been receiving policy briefings on the state of the world: "I had a rather in-depth briefing on what's going on in Kurdistan," he told a reporter at the Iowa State Fair earlier this month. He's also traveled abroad, including a trip to Israel last October and an upcoming trade mission to Japan and China next month.

Foreign policy chops will be crucial in 2016 if the increasing number of conflicts around the world continue raging. And for Republicans such as Perry, who as Texas governor for the past 14 years has little foreign policy on his resume, there's a lot of catching up to do given the possibility of running against former Secretary of State Hillary Clinton or Vice President Joe Biden, whose resumes are long on international experience.

"The world is a cauldron of instability and in many cases, violence, and any observer would expect foreign policy to be a much bigger issue in the 2016 race," Sullivan said. "The next president will be left to pick up the pieces and to try to keep the country safe and to make the world safer."

"This is a good first step for him but it's the first step of a long journey."