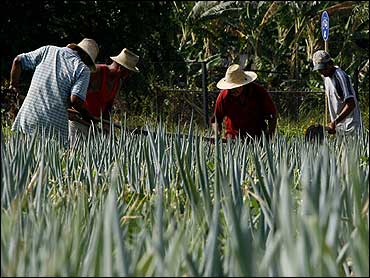 It's a question rekindled by the recession: Are immigrants taking jobs away from American citizens? In the heart of the nation's biggest farming state, the answer is a resounding no.

Government data analyzed by The Associated Press show most Americans simply don't apply to harvest fruits and vegetables. And the few Americans who do usually don't stay in the fields.

"It's just not something that most Americans are going to pack up their bags and move here to do," said farmer Steve Fortin, who pays $10.25 an hour to foreign workers to trim strawberry plants at his nursery near the Nevada border.

The AP analysis showed that, from January to June, California farmers posted ads for 1,160 farmworker positions open to U.S. citizens and legal residents. But only 233 people in those categories applied after learning of the jobs through unemployment offices in California, Texas, Nevada and Arizona.

One grower brought on 36. No one else hired any.

"It surprises me, too, but we do put the information out there for the public," said Lucy Ruelas, who manages the California Employment Development Department's agricultural services unit. "If an applicant sees the reality of the job, they might change their mind."

Sometimes, U.S. workers also will turn down the jobs because they don't want their unemployment insurance claims to be affected, or because farm labor positions do not begin for several months, and applicants prefer to be hired immediately, Ruelas said.

Fortin spent $3,000 this year to make sure that domestic workers have first dibs on his jobs in the sparsely populated stretch of the state, advertising in newspapers and on an electronic job registry.

But he did not get any takers, even though he followed the requirements of a little-known, little-used program to bring in foreign farmworkers the legal way by applying for guest worker visas.

The California figures represent only a small part of the national effort to recruit domestic workers under the H-2A Guest Worker Program, but they provide a snapshot of how hard it is to to get growers to use the program and to attract Americans to farm labor, even in the San Joaquin Valley, where the average unemployment rate is 15.8 percent.

The majority of farmers rely on illegal labor to harvest their crops, but they can also use the little-known H-2A visa to hire guest workers, as long as they request the workers months in advance of the harvest season and can show that no Americans want the job.

Of the estimated 40,900 full-time farmers and ranchers in California, just 23, including Fortin, petitioned this year to bring in foreign farmworkers on the visas, according to the available government data. The Labor Department did not respond to a request for comment about the findings.

More than half of farmworkers in the United States are illegal immigrants, the Labor Department says. Proponents of tougher immigration laws as well as the United Farm Workers of America say farmers are used to a cheap, largely undocumented work force, and if growers raised wages and improved working conditions, the jobs would attract Americans.

So far, an effort by the UFW to get Americans to take farm jobs has been more effective in attracting applicants than the official channels.

The UFW in June launched the "Take Our Jobs Campaign," inviting people to go online and apply. About 8,600 people filled out an application form, but only seven have been placed in farm jobs, UFW President Arturo Rodriguez said.

Some Americans referred for jobs at Fortin's nursery couldn't do the grueling work.

"A few years ago when domestic workers were referred here, we saw absentee problems, and we had people asking for time off after they had just started," he said. "Some were actually planting the plants upside down."

Asked what the agency could do to get more U.S. workers into farm jobs, California Employment Development Department spokeswoman Patti Roberts suggested the UFW could refer applicants to the state or employers, and the state could publicize the openings through public service announcements.

Economists have long argued over whether local workers would take jobs in the field if wages rose.

Philip Martin, a professor of agricultural and resource economics at the University of California, Davis, said because so few farmers participate in the H-2A program, it's hard to draw national conclusions.

"Recruitment of U.S. workers in this program doesn't work well primarily because employers have already identified who they want to bring in from abroad," Martin said. "I don't think a lot of U.S. workers are going out there looking for a seasonal job paying the minimum wage or a dollar more."

The Labor Department collects the same data about H-2A visa applications for all 50 states but does not make it publicly available.

In response to a Freedom of Information Act request from the AP, the agency offered to provide some records for nearly $11,000 in copying fees, but it was not clear whether the information would show how many Americans had applied for farm labor jobs nationwide. The AP plans to file an administrative appeal.

Benjamin Reynosa, who was picking ruby-colored grapes in 90-degree heat last week near Fowler, just south of Fresno, said he often is the only legal U.S. resident on seasonal crews. He said most people hear about the jobs through word of mouth or signs tacked outside rural stores, not the electronic registry.

"I've been working in agriculture for 22 years, and I can tell you there are very few gringos out here," said Reynosa, 49, of Orange Cove, about 30 miles east of Fresno. "If people know English, they go to work in packinghouses or sit in an office."

In Tulare County, where the unemployment rate is nearly 16 percent, job seekers on a recent morning crowded around computers at the job development agency.

Amid the U.S. Army flyers posted in the lobby, however, under the heading "HOT JOB LEADS," was an ad for a farmworker position, preferring someone with Spanish fluency and tractor maintenance skills.

Miller said later it was the first she had seen such a notice. She hadn't received any applications, she said.

Online prices fall for the first time in two years