Imagine a giant of the fashion world who grabs our attention as much by his words as by his designs. No need for imagining . . . he actually exists. His name is Kenneth Cole, and he delivers The Goods . . . which is the title of the series that our Tracy Smith now launches:

In 25 years, designer Kenneth Cole has created an international fashion empire from the ground up.

He started out designing and selling women's shoes. His name's now on everything from sunglasses to cologne, dresses to bags.

And in a notoriously cutthroat industry, Cole has managed to stand out by combining shoebox . . . and soapbox.

His success may be due in large part to his ad campaigns: Those clever one-liners that often seem more social commentary than sales pitch.

"I've always felt that there's a bigger way to connect to an individual," Cole said. "And it's not just what you look like on the outside, but maybe who you are on the inside. Something bigger than a specific product."

But it's not just a message, it's a moneymaker. Kenneth Cole, the company, did nearly half a billion dollars in sales last year alone.

As a man who's become a mega-brand, Cole has little time these days to actually sit down and design. But he's been involved with every aspect of the company since the beginning. He even lived across the street from his first store in New York.

"I had an apartment here and I used to kind of be able to look down in the store," he told Tracy Smith "And I had a telescope.

"Is that what you were counting, the shopping bags?" Smith asked.

"Well, when I was bored. Some people, when they couldn't sleep, they'd count sheep. I'd count shopping bags." 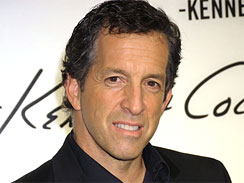 And while Cole has always had a keen eye on shoppers, as a kid he was more interested in watching curveballs. He said he wanted to be a shortstop for the New York Mets when he grew up. "I failed in that regard, but not out of lack of trying. You should know that."

In fact his first job was selling peanuts at Shea Stadium. "I was a good peanut vendor. I sold a lot of peanuts."

After graduating from college, he went to work at his dad's shoe factory, where they created Candies . . . the platform for the disco craze of the late '70s. "Candies was a big business,' Cole said. "We sold many millions of shoes."

Fresh on the heels of the success of that trendy women's shoe, Cole set out in 1982 to design his own line.

"What a woman looks like from the ankles down is important, so this is where we started," he said.

Cole said he decided early on that selling shoes required a bit of showmanship . . . a stunt . . . that might grab buyers' attention. So he parked a trailer on a busy New York City street and pretended to shoot a movie.

"Forty-thousand pair of shoes. What do you think it was? Why did the buyers come?" Smith asked.

"Well, they were intrigued. And we also made 'em wait. This was kind of the Studio 54 days. And everybody had to wait a little bit. And the more that we made 'em wait, the more they invariably bought when they came in."

Perhaps it's no surprise then that Cole also took a unique approach to his ad campaigns. Instead of a traditional model, his first ad commented on a big news story: The first lady of the Philippines, a woman with footwear issues of her own.

"We ran an ad. We said if, in fact, Imelda Marcos did buy 3,000 pair of shoes, she could've at least had the courtesy to buy a pair of ours."

Cole wasn't content just to poke fun at the headlines . . . he wanted to change them, especially when it came to a newly-discovered deadly virus. 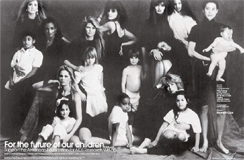 (CBS)
Cole, who's not gay himself, wasn't worried about a stigma. So in 1986, when many people were afraid to talk about AIDS, Kenneth Cole kept the issue front and center.

He started with this ad (left), shot by famous portrait photographer Annie Leibovitz.

"It was an opportunity to say something important that nobody was saying," he said.

"But you were taking a huge risk," Smith said.

"But you're not just gambling your livelihood when you address an issue like that. You're gambling the livelihoods of all of your employees. You didn't think about that?"

"You know what it is? I felt, in many ways, I was elevating our collective purpose. And I found a place to make what we did really relevant. And I was prepared for some feedback and backlash. And I got none." 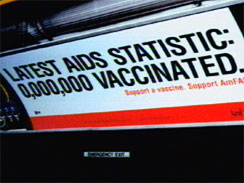 amfAR is where Cole donates his creativity and millions, and serves as chairman of the board.

"He's prepared to take the kind of risk that I would argue very few businessmen take today," Frost said. "I'm sure it's partly responsible for his success. But it unquestionably is responsible for our success."

AIDS is one of many issues Cole has tackled over the years, in ads that rely heavily on wordplay and double meanings. He initially used an outside ad agency but brought the process in-house in the early '90's . . . and thinks up many of the puns himself.

What does he think customers think of the puns? Do they laugh?

Smith asked legendary ad man Jerry Della Femina what his reaction would have been if someone had come to him in the 1980s and said, "I want to raise social awareness with my ads, and I want to sell the product."

Della Femina says it turned out to be a very smart move. "Let's face it: Without that advertising there wouldn't be a Kenneth Cole right now. Product wouldn't be there. The advertising was the difference between success and failure for Kenneth Cole."

And while the ads have won over customers, they've often pushed the limits . . .

"Do you think it's ever hurt you over the years?" Smith asked.

Right after 9/11, Cole came out with a controversial ad campaign.

"It was a series of messages and one of which said, on 9/12, '14,000 people contracted HIV.' Essentially, the bigger message was, in some ways things changed profoundly, in other ways, they didn't change at all. So people felt that maybe it was inappropriate."

He received hate mail for those, and for one playing on the 2000 election: The intersection of Bush Ave. and Cheney Lane is marked by a street sign reading "Dead End."

"That was a mistake?" Smith asked.

"Yeah, that got out there."

Cole claims his messages are social, not political. But sometimes the lines get blurred. After all, politics runs in the family. He's married to Maria Cuomo, daughter of former New York Governor Mario Cuomo, and sister of New York Attorney General Andrew Cuomo.

So, is there any chance that, any time soon, Kenneth Cole will be quiet?

"I don't do quiet easily," he replied.

One thing he's trying to do more of is return to his roots and design again.

So Kenneth Cole is back at the drawing board . . . while still trying to "heel" the world.