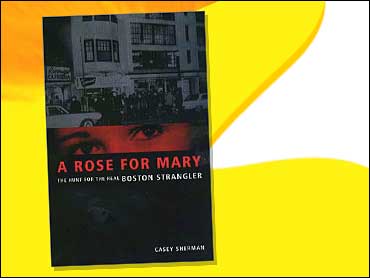 Terror gripped Boston for nearly two years in the early '60s when 11 women were brutally murdered by a serial killer dubbed "The Boston Strangler."

A handyman named Albert DeSalvo confessed to being the Boston Strangler, but there was never any hard evidence that he was the real murderer. He was incarcerated for other crimes and was murdered in prison.

Almost 40 years later, the family of Mary Sullivan, the strangler's last victim, claims to have uncovered evidence that DeSalvo was not the Boston strangler.

Casey Sherman, Sullivan's nephew, writes about the case in his new book, "A Rose for Mary: The Hunt for the Real Boston Strangler."

Sherman is also a television producer for WBZ-TV News in Boston and a contributing writer for Boston magazine, bringing a unique perspective to his book, that of an investigative journalist with a story to tell and that of a victim's family member fighting to find his aunt's murderer.

Sherman says he grew up knowing his Aunt Mary only from the photo on the mantel piece. She was discussed only in hushed tones and never in front of the children. When Sherman was about to leave for college, he happened to see the movie "The Boston Strangler" with Tony Curtis on television. That piqued his interest and, he says, "gave me the power to ask my mother about it." When he did, his mom explained that Mary was the last victim in the case. He said to her, "Well, at least they got the guy," and she said, "No, they never did."

That was the beginning of Sherman's quest to find out about Mary's murder. He tells The Early Show co-anchor Rene Syler, "I wanted to prove that DeSalvo did do it and at least have some kind of closure. Once I peeled back the onion, I realized this guy didn't do it. The only thing connected to DeSalvo was his confessions and not a shred of physical evidence. He was simply confessing to events that never happened."

Sherman says he believes he knows the identity of the person who killed his aunt. He says, "It was a man that was a boyfriend of one of her roommates who had broken into the apartment and she caught him in the act. And, unfortunately, he killed her. This man was the prime suspect at the time of her murder. He failed two lie-detection tests and put to the scene of the crime by the only witness to the crime and, as I said, police were very close to arresting him when all of a sudden DeSalvo comes out and confesses to all of the crimes. Well, I was able to find this gentleman. He lives in New Hampshire and never served a day in jail on anything.

Sherman says the man is a golf pro. He describes their meeting. "I knew he was very interested in my case, obviously. And I figured I owed him his side of the story, so I didn't know how to approach him by doing that, so what I did was I booked a golf lesson under an assumed name and met him on the golf course and I had a disguise on. And we were just about to go for the first hole when I took my hat off and glasses and I said, 'I'm not so and so. I'm Casey Sherman.' And his jaw hit the floor."

Sherman says he asked the man pointblank if he was the one who killed his aunt. "And he denied it," Sherman says. "We had a very contentious conversation, as you can imagine. About that time, he contradicted his story at least eight times. I finally said, 'What is your alibi? What were you doing the date my aunt was murdered?' He said, 'I was watching football on TV with my grandfather and I remember it like it was yesterday.' Driving home that night, I was thinking how do I prove that this alibi is a lie? So I went back and looked through all of the sports encyclopedias and found that day, January 4, 1964 no football games were played or televised, so his alibi is bogus."

Albert DeSalvo: Claimed that he had intercourse with Mary Sullivan
FACT: Autopsy report showed no seminal evidence inside the vagina

Albert DeSalvo: Claimed he strangled Mary with bare hands.
FACT: She was strangled with two scarves and a stocking with no signs of manual strangulation. The DNA found on Mary Sullivan's body did not match Albert DeSalvo's.

DeSalvo motives for confessing to be the Boston Strangler:

Read an excerpt from "A Rose for Mary: The Hunt for the Real Boston Strangler":

Mary Sullivan could not wait to get a jump on this new day.

Even though it was Saturday and she did not have to work, she was up by 7:30 a.m. After a cup of coffee, she'd retrieve her record player and prized Johnny Mathis record collection from her car, which was parked on the street. She had been living in her new apartment for four days now and was getting along wonderfully with the two roommates she once had worked with at Filene's department store.

Mary would begin her new job at the bank on Monday, but today she would finish moving her belongings into her new home.

Granted, accommodations were cramped. There was only one bedroom, which could fit two beds, and since Mary had been the last one to move in, she had to sleep on the living room couch. But Mary was used to cramped quarters, having grown up with three sisters and two brothers.

Mary's high spirits were not dampened that Saturday by the fact that she was spending it alone. Her roommates, Pat Delmore and Pam Parker, had been called into work at Filene's to help handle the mad rush of holiday returns, but she had promised to have dinner with them that evening. Forecasters predicted the temperature would be in the upper forties: it would be a good day for Mary to explore her new neighborhood.

Her apartment was on the top floor of the three-story building at 44A Charles Street in Boston, just down the street from her favorite pub, The Sevens, a small, lively joint with a long bar that seated about twenty-five people comfortably but on a good night often packed close to fifty.

Charles Street was and remains a bustling area. With its antiques shops and small tucked-away cafe´s, it is one of the few places in the city where Boston Brahmins connect with the lower income and college crowds. Cutting through the heart of the Beacon Hill neighborhood, Charles Street is just one block from the Boston Common and three blocks from the golden dome of the statehouse.

The neighborhood of roughly ten thousand residents is steeped in history. Before the American Revolution, Beacon Hill was a pastureland for cattle. Then builders constructed elegant row houses along the south slope of the hill, which attracted Boston's finest families. The Cabots and the Lodges made their homes here.

Then, in the late nineteenth century, European immigrants, sailors, poets, and former slaves flooded the north slope of Beacon Hill, adding a touch of bohemia to the blue-blooded neighborhood. Mary Sullivan's Charles Street neighborhood, with its cobblestone walks and gas lamps, was the Boston pictured in postcards, not a place where one would expect a gruesome murder. Mary certainly thought it was safe.

That same day, Diane Sullivan received a letter from her sister in the mail. Not waiting until she got inside, she opened the letter right there at the mailbox. Mary wrote that she was enjoying her new life in Boston and invited Diane up to stay. Diane immediately started thinking about the fun they would have in the big city. Of the six Sullivan children, seventeen-year-old Diane and nineteen-year-old Mary were the closest in age and in character, and the two were best friends. Diane raced inside the house and handed the letter to Florry, who looked at the address and sighed.

"44A Charles Street! That's dangerous. We're going up to get her as soon as your father comes home," Florry pledged. Diane was confused. Charles Street was considered one of the nicest places to live in Boston. Why was Florry so afraid?

After a frantic day at Filene's, Mary's roommates returned to their Charles Street apartment at approximately 6:00 p.m. The temperature had dipped below freezing, and a light snow had begun to fall. After climbing the long flight of stairs, Pat Delmore pulled her key chain out of the pocket of her wool coat, only to realize that her apartment key was no longer on the chain. Something else disturbed her. It appeared that Mary had forgotten to lock the door.

"Mary's gonna have to be more careful. I need to have a chat with her about keeping this door locked," Delmore thought.

She and Pam Parker entered the apartment. The hall light was on, but otherwise the flat was dark. Then the roommates noticed that their bedroom door was open. "I could see Mary lying on the bed in the dark," Pat recalls. "I knew something was wrong."

Parker slowly walked into the bedroom. She could make out Mary's shape, almost in a sitting position near the headboard.

"Wake up, Mary, we're home. We're about to put dinner on," Parker said softly. When there was no reply, she called out again.

Silence. "I could see Mary's eyes [were] open," Parker recalls. "She was looking right at me. I didn't know why she wasn't responding."

Nothing could have prepared her for what she saw when she flicked on the bedroom light. Mary's breasts were exposed. Three ligatures were wrapped tightly around her neck. A broom handle had been lodged in her vagina. There was also a greeting card sitting on the bed by her left foot. It read, "Happy New Year."

Parker ran out of the bedroom screaming, "I think she's dead. I think she's dead!" Pat Delmore stood in the kitchen, frozen. "Pam grabbed my elbow, and we ran down the stairs. We didn't have a phone, so we had to run across the street to a drugstore," Delmore remembers.

"I was so crazed, I spent five minutes looking through the yellow pages for the police department's phone number." Finally she and Parker reached a dispatcher at Boston Police headquarters, who told them to wait outside the apartment building for help to arrive.

Beacon Hill should have been the safest neighborhood in Boston that night. Twelve police officers had been canvassing the area, interviewing residents for a census report. A few moments after Mary's roommates crossed back to their side of Charles Street, motorcycle officer John Vadeboncour pulled up outside their building and ushered Parker back up to the apartment. His words echoed the thoughts of Mary's roommates: "O my God!"

From "A Rose for Mary: The Hunt for the Real Boston Strangler," by Casey
Sherman. Copyright 2003 by Casey Sherman. Reprinted with the permission of Northeastern University Press.