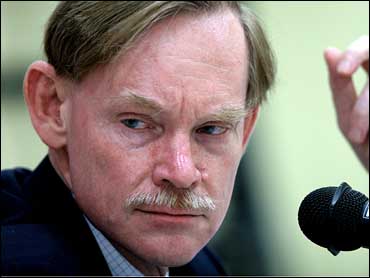 Rice praised Zoellick's "tireless work ethic," and said he had served as her "alter ego" in the department. She did not announce a replacement.

"Our nation is stronger and safer because of your work," Rice said at a State Department announcement.

"I appreciate your confidence and friendship," Zoellick replied.

Zoellick, who served six years in the Bush administration, said he would join the Wall Street investment house Goldman Sachs Group Inc, where he will be Managing Director. Focusing on the firm's global strategies, Zoellick will also hold the title of Vice Chairman, International, and will serve as chairman of the firm's International Advisors.

In his resignation letter, dated June 15, Zoellick, 52, did not say why he was leaving. A former U.S. trade representative, Zoellick reportedly wanted to be promoted to treasury secretary to replace departing secretary John Snow, but President Bush nominated Goldman Sachs executive Henry Paulson instead.

"I'm pleased to have built a first-rate team, offer counsel on a number of initiatives and backup the secretary," Zoellick said at the news briefing. "I've accomplished what I set out to do, and it's time to step down."

White House spokesman Tony Snow said Zoellick had "been wanting to pursue options in the private sector for some time and now he's going to do it."

"Bob Zoellick is a guy who is highly competent and has served a number of presidents but you also know at a certain juncture in an administration some people who have worked hard for a long time, need to go back and pursue other opportunities."

Zoellick is expected to leave the State Department in July, officials said.

He has been the administration's leading diplomat handling the volatile situation in Sudan's western Darfur region, where at least 180,000 have died since villagers began an uprising in 2003.

Zoellick has also been the State Department's chief diplomat dealing with China.

"He has been one of my closest and most valued advisers on every single international issue," Rice said.

Although Zoellick was not widely known beyond Washington, Rice made a joking reference to one instance when Zoellick's photo was printed around the world. During a visit last year to a Chinese panda preserve, the severe, often demanding Zoellick was photographed nuzzling a panda cub and looking delighted.

Rice said she had given Zoellick tough assignments that required him to travel often and fill in for her in Washington, "and occasionally even hug a panda."