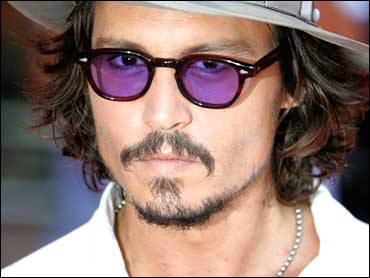 Actor Johnny Depp has finally spoken about the illness that kept his 7-year-old daughter in a London hospital for almost 10 days in March. The "Pirates of the Caribbean" star tells Britain's Mirror newspaper that E. coli poisoning was to blame.

"It gave us a great scare," Depp said, referring to his longtime girlfriend Vanessa Paradis, with whom he has two children (Lily Rose, 7, and Jack, 4). "What got us through this wasn't the strength of Vanessa or me but our daughter and her incredible ability to make us feel OK even though she was very unwell. She was super-strong."

The E. coli bacteria, which can be contracted from undercooked beef or contaminated water among other things, caused the child's kidneys to shut down. The condition kept the actor from the set of his latest film "Sweeney Todd" until he knew his daughter would be OK.

"It was a very bumpy patch but she has come through it beautifully and unscathed and she is now as healthy as she always was. She is wonderful." he says. "It was a reminder to us of how lucky we are to be able to breathe, walk, talk, think and surround ourselves with people we love."

2With the medical crisis now behind him and his family, he's focusing on the release of his latest film, "Pirates of the Caribbean: At World's End," which debuts May 25. He credits the "Pirates" franchise with reviving his career.

"I was the guy who had been bouncing around the film industry for years and I'd been lucky if five or 10 people would see my movies, so Captain Jack did a big flip for my career," he tells the newspaper. "He and 'Pirates' have afforded me and my family a certain luxury in that we are able to live a little more comfortably and it will be something that will reverberate for my kids and their kids."

The UK's Daily Mail newspaper reported on Wednesday that Depp plans to marry his longtime love this summer and that their daughter's recent health scare prompted them to make things official.