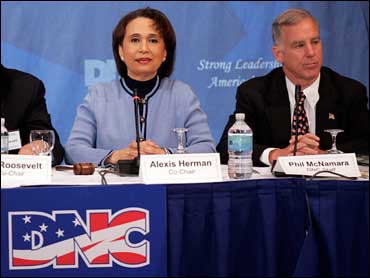 After a day of fiery debate and closed-door meetings, Hillary Rodham Clinton picked up a net total of 24 delegates Saturday from the states of Florida and Michigan as the Democratic Party took a step forward in resolving the dispute over the delegations from those two states to the national convention.

But at the end of the day, Barack Obama remained well within reach of securing enough delegates to claim the Democratic presidential nomination as the primary process winds down next week.

According to CBS News delegate estimates, Obama needs a total of 69 more party delegates to reach the new threshold established by the inclusion of the delegations of both Florida and Michigan.

Obama and Clinton bargained and bickered through intermediaries during the meeting of the party's Rules and Bylaws Committee, settling on compromises in both states that will seat their full delegations at the national convention, but giving each individual delegate just one-half of a vote.

With the agreements, the number of total delegates required for the nomination rose from 2,026 to 2,117, according to CBS News. Under the allocations of the proposal, Clinton picked up 19 more delegates than Obama in Florida and five more in Michigan, based on the January votes taken in those states. Obama's total rose to 2,048 and Clinton's to 1,873.

Clinton's campaign argued that Obama should receive no delegates from Michigan because his name did not appear on the ballot in January. The committee agreed to award him delegates based on the "uncommitted" votes cast in the primary and that decision was a blow to Clinton's efforts to erase her delegate deficit.

The decision on Michigan prompted an irate reaction from boisterous Clinton supporters in the audience and her chief delegate counter, Harold Ickes. Ickes angrily informed the committee that Clinton had instructed him to reserve her right to appeal the matter to the Democrats' credentials committee, which could potentially drag the matter to the party's convention in August.

"There's been a lot of talk about party unity - let's all come together, and put our arms around each other," said Ickes, who is also a member of the Rules Committee that approved the deal. "I
submit to you ladies and gentlemen, hijacking four delegates ... is not a good way to start down the path of party unity."

"Clinton's campaign needed a total victory on the Michigan issue to post any real gains from this process," said CBSNews.com senior political editor Vaughn Ververs. "This result may have stretched the field just a bit, but not enough to keep Obama right on the goal line."

After a morning session that stretched well into the afternoon, the committee was scheduled to reconvene but wrangling over proposed resolutions regarding the situation in Michigan held members behind closed doors well past the time they were expected to appear.

In the opening hours of a daylong meeting of the convention's Rules and Bylaws Committee, Clinton's designated spokeswoman urged the panel to grant a full vote for each of Florida's 211 disputed delegates.

"In life you don't get everything you want. I want it all," California State Sen. Arthenia Joyner said with a smile.

But moments later, Obama's campaign called for half-votes for each of the 211. Rep. Robert Wexler of Florida said that marked an "extraordinary concession, in order to promote to promote reconciliation with Florida's voters."

If anything, the Michigan case was more complicated than the one in Florida. Obama's name was not on the primary ballot. Clinton prevailed over "uncommitted" and Obama's allies claim the large majority of those votes were cast by his supporters.

Mark Brewer, the state party chairman, urged the panel to award Clinton 69 delegates and Obama 59 - an allocation that neither candidate has endorsed publicly.

Not long afterward, former Rep. David Bonior of Michigan, speaking on behalf of the Obama campaign, said the delegates "should be split evenly between the two candidates."

But former Gov. Jim Blanchard, representing Clinton, said the former first lady should receive 73 delegates, with 55 awarded to uncommitted, in accordance with the primary vote. "Respect the voters of our great state. They deserve respect," he said.

The challenge is to "come together at the end of the day and be united," Howard Dean, the party chairman, told members of the committee gathered at a hotel across town from the White House.

There was no doubt that was the goal around the committee table and in the private conversations where compromises were floated - but that didn't make compromise any easier as a historic Democratic nominating contest between a black man and a woman neared an end. And the occasional displays of emotion among spectators at the meeting underscored the stakes.

"This is an important part of bringing the Democratic primary process to an end for party leaders wishing to avoid a protracted fight," said Ververs. "But the outcome of the meeting is highly unlikely to change the shape of the race on which Barack Obama has a near-lock."

Indeed, Obama intends to signal the beginning of his general election campaign next Tuesday by holding a rally in the arena in St. Paul, Minn., where Republicans will to hold their convention this summer. Still, in a sign that hard feelings remain, several hundred protesters maintained a noisy but peaceful presence on the sidewalk outside the hotel where party activists met.

Beverly Battelle Weeks, 56, said she got up before dawn to make the drive from got up before 4 a.m. to drive up from Richmond, Va. for the rally. She carried a black umbrella on which she had pasted letters spelling out "Count All Votes."

"The right thing to do is to seat all the delegates. Anything less is not democratic," she said.

Clinton won the Michigan primary Jan. 15 and the Florida vote two weeks later after all the candidates agreed not to campaign in either state.

At the time, she said the vote did not matter. But once she fell behind Obama in the delegate competition, her position shifted.

"It's important to send the right signals to them and the people living in those states that we Democrats value those states, value those voters and want them as full partners in a general election in assembling 270 electoral votes," said Clinton strategist Harold Ickes, a member of the rules committee.

While Obama initially showed no enthusiasm for seating the two delegations, he has shown more flexibility in recent weeks - as long as any compromise left his status as front-runner unchanged.

"We have both fought hard throughout the country, both of us, for delegates and the fact that we're willing to essentially cede her delegates we do not think is an insignificant gesture on our part," Obama campaign manager David Plouffe said. "But we're willing to do this in the interest of trying to bring this to a close so we can focus on the general election."