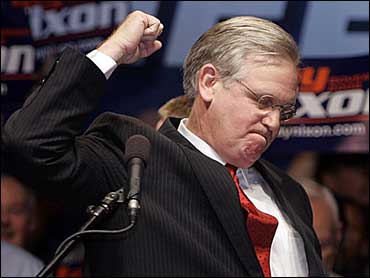 Governorships in 11 states - from New Hampshire to Washington - were at stake this Election Day, with voters for the most part keeping the incumbent party in office. Democrats scored one upset, winning the governorship in Missouri.

In all, eight incumbents faced challenges, and all of them won. Three of the races filled open seats.

The Missouri governorship is currently held by Republican Gov. Matt Blunt, who decided not to run for re-election after serving one term.

Nixon ran on a dual platform of experience and change, referring to his record 16 years of service as attorney general and to his party's out-of-power status for the past four years.

Nixon and Hulshof both focused their campaigns on the economy, education and health care, while casting each other as big spenders incapable of changing Missouri's Capitol.

One of the more closely watched races was Washington's gubernatorial contest, with Gov. Christine Gregoire projected to win her race against her Republican challenger, businessman Dino Rossi.

Their face-off was a repeat performance: in 2004, Rossi was certified twice as the winner of the election, but Gregoire paid for a hand recount, which declared her the winner by a mere 133 votes out of a total vote of 2.8 million.

This time around, Rossi blamed Gregoire for a projected budget deficit and said he's the best one to trim state spending. Gregoire blamed the Bush administration for the economic slowdown and said she has a record of helping children and improving education.

"This vote of support, when there's been so much doubt in the past, means she's solidly entrenched in the office. It's a clear endorsement from the people of Washington state," said CBS News consultant Mark Mellman, who's also a Democratic strategist.

"I haven't run simply because I'm the first woman candidate running, but I hear it everywhere I go," she said Tuesday. "Little girls and little boys, just say 'Wow, is it possible?' So, yeah, it's exciting, mighty exciting."

Polls in the campaign's final weeks showed the race too close to be called. Purdue's win fills one of the three open gubernatorial seats, as she will succeed two-term Governor Mike Easley.

And in Delaware, State Treasurer Jack Markell defeated Republican challenger Bill Lee. "What a great night to be a Delawarean!" Markell told a cheering crowd of supporters at a hotel in downtown Wilmington as his family looked on.

"I cannot be more blessed," he said.

This was also an open seat, as Gov. Ruth Ann Minner, a Democrat, is barred from seeking a third term.

In New Hampshire, incumbent Gov. John Lynch was projected to beat Republican State Senator Joseph Kenney. Kenney failed to convince voters that spending under Lynch has been so out of control that frugal New Hampshire is becoming too much like its neighbors. Lynch blamed the state's fiscal problems on the worsening economy.

In Indiana Gov. Mitch Daniels won re-election in his race against Democrat Jill Long Thompson. According to the White House, President Bush called Daniels to congratulate him on the win.

All Gubernatorial Election Results At A Glance