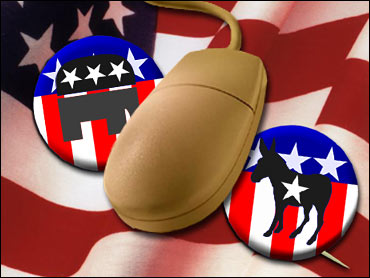 
In an effort to manage the message, Democrats bombarded media websites with post-debate spin immediately following Thursday's Bush-Kerry face-off in Florida – and it apppears to have paid off.

In a survey of non-scientific online polls done by ten major media sites, Sen. John Kerry was running about 20 points better than in traditional, scientific polls. Though Kerry was solidly ahead in three traditional polls as well, in the online polls he was a landslide winner.

In an email prior to the debate, Democratic National Committee Chairman Terry McAuliffe urged the party faithful to "vote in online polls" as soon as the debate ended.

The email also urged Democrats to write to local newspapers and call radio talk shows. Major media website addresses were given. Democrats were implored to forward the message to "at least" ten other people.

Republicans, the McAuliffe email read, "stole the post-debate spin" in 2000, and "we are not going to let that happen again."

Democrats believed Al Gore beat George W. Bush in the first debate in 2000. But key Kerry campaign staffers said Mr. Bush was seen as the winner in the following days because Bush advisers successfully controlled the spin through relentless attacks on Gore's credibility.

"Al Gore won the debate on the issues and George Bush's henchmen stole it in the post-debate spin because they got out on online polls and called into radio shows," said Doug Kelly, director of technology for the DNC. "We were determined to not let that happen again."

So to insure that voters "understood" Kerry won the debate, Kelly directed what he called a "comprehensive online multimedia strategy." Friday morning, major media websites were strewn with banner ads linking to the DNC homepage.
The McAuliffe email, sent twice Thursday to 5 million users, contributed to the DNC raising a "single-day record" of $3.8 million. During the debate alone, the DNC raised $1 million. Though quick to credit Kerry, Kelly believes the urgent tone of the email had a tangible effect.

An ABC News poll of registered voters showed 45 percent believed the Democratic nominee won compared to 36 percent for Mr. Bush. A CNN/USA Today/Gallup poll placed Kerry with an even higher margin of victory over Mr. Bush, 53 percent to 37 percent.

But, with the exception of Mr. Bush's essentially hometown newspaper, the Houston Chronicle – which gave the president a 51-45 percent advantage – Kerry faired significantly better in online polls from around the country.

The Chicago Tribune's online poll, for example, gave Kerry a 68-31 percent edge, while Newsday.com had Kerry ahead by 83-16 percent.

Similar results were found in the Tampa Tribune online poll (74-23 percent in favor of Kerry) and the St. Louis Post-Dispatch (Kerry the winner by 83-7 percent).

The Denver Post online poll had Kerry winning 74-21 percent, and the Atlant Journal Constitution had him ahead of the president by 57-30 percent.

MSNBC's online poll showed Kerry the winner by 62–38 percent, while CBSNews.com had him leading Mr. Bush by 88-10 percent.

For the DNC's Kelly, the online polls showed that Kerry did the "hard work," but also that their strategy worked. Though unscientific, the polls did represent a pattern: Democrats were online and in action.

"Impulsive intensity counts for something in politics. If all that happened as a result of last night's debate is that Kerry's supporters are energized, that will mean something," said Mike Cornfield, who monitors online political activity for the Pew Internet and American Life Project.

"Even if no undecideds went into either camp and if no wavering voters were firmed up and more likely to turn out, if all this does is juice the army, that is a plus for Kerry," Cornfield said. "What it shows is that there is a combination of spontaneous enthusiasm and clever campaigning."