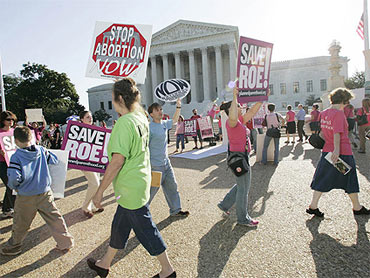 This story was written by CBSNews.com political reporter Stephanie Condon.


After years of appealing for a middle ground on the issue of abortion, Democrats are now directly confronting the issue in fairly black-and-white terms in the context of their larger health care debate: Should Congress restrict access to insurance coverage for abortions?

The abortion issue has finally reared its head after years of taking a backseat to priorities like war and the economy, leaving both supporters and opponents of abortion rights feeling that the Democrats' middle-ground approach is falling short. The so-called Stupak amendment, which uses the House health care bill to restrict insurance coverage for abortions, has split open the debate to reveal complex but divided opinions on the subject of abortion. And as the public reconsiders the issue, interest groups on both sides of the debate are demanding more from Democrats.

"The president says this shouldn't be an abortion bill," said Douglas Johnson, legislative director for the National Right to Life Committee. "That's kind of one of those focus group statements that is kind of meaningless. If he meant that, he should be for the Stupak amendment because the Stupak amendment takes abortion out" of the health care bill.

President Obama did indeed say that "this is a health care bill, not an abortion bill," but that the Stupak amendment does not appear to maintain the status quo when it comes to abortion. Nevertheless, 64 Democrats in the House joined with Republicans to approve the measure.

"I think it says they're leaving women behind," said Nancy Northup, president of the Center for Reproductive Rights, on the other side of the issue. "Anti-choice forces in Washington are trying to use this important moment of health insurance reform to expand restrictions on abortion coverage in private insurance plans."

Both sides say the Stupak amendment has galvanized their supporters, and they are doing all they can to influence the fate of the amendment, which now rests in the Senate.

The abortion amendment, introduced by Reps. Bart Stapuk (D-Mich.) and Joe Pitts (R-Penn.), would prevent women who receive federal subsidies for health insurance from purchasing plans that cover abortion. It would also explicitly ban abortion coverage from the government-run plan, or "public option." It would also effectively bar private insurers from selling plans on the national health insurance exchange that cover abortion. Some contend it could even impact plans outside of the exchange, given the level of government involvement in the restructured health care system.

"It's making people stand in a certain camp," said Marjorie Dannenfelser, president of the Susan B. Anthony List, which works to promote female political candidates who oppose abortion rights. "All of a sudden people who had latent pro-life feelings are having to make a decision."

The number of Americans who identify as "pro-life" appears to be growing. A Gallup poll in May found that more Americans described themselves as "pro-life" rather than "pro-choice" for the first time since Gallup started asking the question in 1995. Furthermore, a CBS News poll (PDF) released yesterday showed that 40 percent of Americans believe that abortion should be available but under stricter limits than it is now, while just 34 percent say it should be "generally available."

These numbers contrast with longstanding trends showing generally strong support for abortion rights. Polls from as recently as last month -- from CBS News (PDF) and NBC and the Wall Street Journal (PDF), for instance -- show strong support, though not as strong as in previous years.

In spite of what appears to be increasing polarization, 60 percent of Americans still believe the country needs to find middle ground on the issue abortion, according to a Pew Research Center poll. Democrats in recent years responded by shifting their focus from preserving abortion rights to emphasizing ways to prevent unwanted pregnancies.

To a certain degree, groups supporting abortion rights have accepted this strategy and still see Democrats as their natural allies.

The language in the Democratic party's 2008 platform "is among the strongest pro-choice ever adopted," said Ted Miller, communications director for NARAL Pro-Choice America. The platform says the party "unequivocally supports Roe v. Wade and a woman's right to choose a safe and legal abortion, regardless of ability to pay."

On top of that, Miller says that Congress saw a net gain of 44 "pro-choice" votes in the House and nine in the Senate in the 2006 and 2008 election cycles.

"I think a lot of senators recognize just how far the [Stupak] language goes," Miller said. "That's promising, but we can't take anything for granted."

If it comes to it, NARAL could put its political clout behind Democratic primary challengers who show a better commitment to abortion rights.

"We are looking at the list of folks who sided with Stupak over women in the House and looking at the best ways to make sure they understand that their vote was out of line with their constituents," Miller said.

In the meantime, abortion rights groups are mobilizing their supporters to help persuade Senate Majority Leader Harry Reid (D-Nev.) to keep the Stupak amendment out of the Senate bill. They are holding continuous meetings with lawmakers, sending them petitions from constituents, facilitating phone calls to congressional offices and running television ads to press their point.

Miller said NARAL's Web site traffic has increased and attention to its social networking sites has grown "exponentially" in recent days because of the amendment. "It's definitely opening up a new dialgoue," he said.

Johnson of the National Right to Life Committee concurs with Miller that "there's quite a few senators who'd like to vote with the abortion lobby." He says, however, that the public attention paid to the Stupak amendment will work in the favor of groups opposed to abortion rights.

"Public opinion comes to bear, and they know that their votes are going to be scrutinized," he said.

The Extent of the Stupak Amendment

Yesterday's CBS News poll shows that 56 percent of Americans think health insurance paid for or subsidized with government funding should be prohibited from covering abortions.

A September poll from Public Opinion Strategies showed that 43 percent of Americans said they would be less likely to support the president's health care plans "if the government paid for abortions." Most people, however -- 46 percent -- said it would not make a difference to them.

Abortion coverage is more central to health care than some may realize, abortion rights groups argue.

"One in three women in the U.S. has an abortion in their lifetime, whatever they might think at a particular point in time," Northup said, citing a statistic backed up by the Guttmacher Institute. "That is a lot of the American public."

Furthermore, the Stupak amendment is expected to prohibit abortion coverage for more than just plans directly funded through the government, as one might interpret the proposal to mean. Private insurers within the national health insurance exchange would almost certainly stop offering abortion coverage completely, even to those paying completely with their own money, according to some analysts. In addition, given that all employer-based plans are tax-exempt, abortion coverage is essentially already benefiting from public support, Politico points out.

"The practical effect is millions of women working women -- women who are paying for their own coverage, entering the workforce for the first time, working mothers -- are going to lose benefits under this bill," Rubiner said. "The purpose of health care reform is to make sure people get more benefits, not lose their benefits."