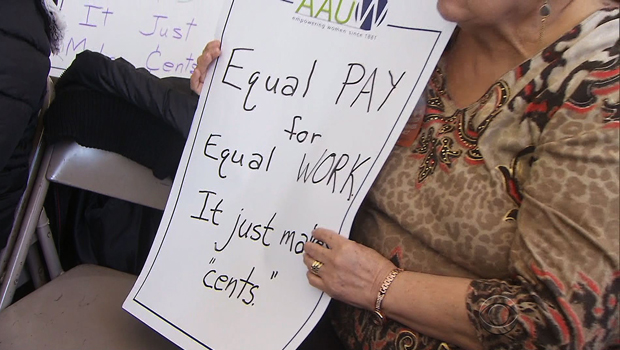 Democrats have catapulted equal pay close to the top of their election-year agenda, but efforts to address the gender wage gap face an uphill battle at both the state and federal levels.

On the campaign trail, Hillary Clinton has made the issue a major selling point of her economic vision, vowing to close the wage gap by fighting for pay transparency and calling on Congress to pass key legislation she first introduced when she served in the Senate.

“Guaranteeing equal pay won’t just increase paychecks for women – it will boost family budgets and get incomes rising across the board. I don’t understand why Trump’s against that,” the Democratic presidential nominee said in a speech on the economy in Michigan earlier this month.

Donald Trump, on the other hand, has not been consistent on the issue. Last August, he told MSNBC that men and women deserve the same pay if they’re doing the same job: “If they do the same job, they should get the same pay.”

A few months later, at an event hosted by No Labels in New Hampshire, Trump appeared to shift on the issue. A voter asked him if a woman would make the same salary as a man if he’s elected president.

“You make the same if you do as good a job,” Trump replied.

Under the Equal Pay Act of 1963, men and women in the same workplace are supposed to receive equal pay for equal work, a wage disparity still exists, several studies show. The Labor Department estimates that a woman working a full-time job, year-round in 2014 made only 79 cents for every dollar that a man earned working the same amount of time, according to data compiled by the Census Bureau,

For the last decade, Democrats on Capitol Hill have pushed for a legislative fix to close that gap, but they’ve been largely unsuccessful. Since Clinton first introduced the Paycheck Fairness Act in the Senate in the mid-2000s, they’ve lobbied for consideration of the bill, which would update the 1963 law. It would require employers to show that wage differentials are not based on gender, it would prohibit employers from punishing employees who ask about wage practices or those who make their salaries public and it would require that wage comparisons be made across geographical areas to determine what would be fair pay, among other things.

Senate Republicans blocked the measure in 2012 and twice in 2014 and there hasn’t been a major vote on it since. Before one of the votes two years ago, then-Senate Minority Leader Mitch McConnell, R-Kentucky, argued that it would “double-down on job loss, all while lining the pockets of trial lawyers.”

With little movement on equal pay in Congress, states are tackling the issue themselves.

In 2016, 25 states considered equal-pay related measures and only four of them enacted measures into law, according to the National Conference of State Legislatures. Seventeen of the 25 states rejected the proposed measures while others sat in legislative limbo. In New Jersey, Republican Gov. Chris Christie vetoed an equal pay law in May that would have prohibited an employer from paying one sex less than the other for “substantially similar” work. According to NJ.com, Christie said the bill oversimplified wage comparisons because it didn’t take differences in employees’ work and conditions into account.

“There are a hundred different things that we can claim are the cause of women’s lower average earnings, relative to men, of equal, observable ability, education, skill,” said Claudia Goldin, an economics professor at Harvard University. “For each one of these, we play the game of whack-a-mole and say, ‘I’m going to fix this one and fix this one,’ where the problem is something completely different.”

Emily Martin, general counsel and vice president for Workplace Justice, told CBS News that women being paid less than men is one piece of the puzzle, but then there’s also the fact that women are overrepresented in low-wage jobs and underrepresented in higher-wage jobs. She said there are also women who face unfair financial situations later on in life because their care-giving obligations like caring for children might force them to leave the workforce for an extended period.

Despite the lack of progress to solve the issue at the state and federal levels, Martin said having even a few states pass equal pay laws is “pretty substantial.”

Massachusetts Republican Gov. Charlie Baker also signed a major equal pay law in early August and one of its components is the first of its kind in the country: the new law will prohibit employers from requesting the salary history of a prospective employee during a job interview. The passage of the law came after a two-year lobbying campaign by a coalition of groups, which even included the Greater Boston Chamber of Commerce.

Terry O’Neill, the president of the National Organization for Women, explained that banning employers from demanding salary history is a big deal because women can receive an unfair offer for a new job as a result of a lower salary history, perpetuating the gender pay gap.

“It makes her first experience with being underpaid get kind of baked into the cake of her entire career,” O’Neill told CBS.

“I’m concerned about it,” she told CBS. “I think telling employers they can’t ask that question, it’ll put some people at a disadvantage. Being willing to work for less is a selling point for some candidates and instead of having that option and [allowing an employee to say], ‘Let me get my foot in the door and get started at less than the other guy,’ [the employer is] going to say, ‘Okay, I’m going to take the guy with the most years of experience.’”

She added, “Creating all of these regulations and preventing people from seeking information isn’t going to stop bad behavior necessarily.”

California, which enacted a major equal pay law last year, is considering a bill now that would make employers meet a fairly high bar if they need to ask for salary history information. It says that an employee’s “prior salary cannot, by itself, justify any disparity in compensation” unless there’s a bona fide factor and it would make it easier for employees to sue if they find out employers only used salary history if a pay differential existed with a male co-worker working the same job.

According to the American Association of University Women, 48 states and Washington D.C. have an equal pay law or an employment discrimination law in place -- though their protections vary greatly. Alabama and Mississippi, meanwhile, have neither type of law on their books.

If change on equal pay continues at the same pace, the Institute for Women’s Policy Research predicts it could take more than four decades -- until 2059 -- before women and men are paid equally.

Martin says that although no one can “wave a magic wand” with equal pay, she’s hopeful that the latest bit of momentum could speed up that outcome.

“While I don’t think we will get to eliminating the pay gap next year, I think it’s a multi-year process,” she said. “There’s increased political will to shorten that timeline by a lot.”