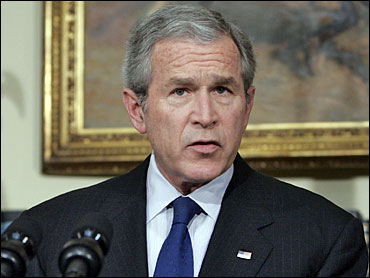 Senate Majority Leader Harry Reid added that Democrats won't give up on efforts to bring an end to the war.

On the fourth anniversary of the day Mr. Bush directed the invasion to begin, the president made a televised statement from the Roosevelt Room of the White House to defend continued U.S. involvement.

He said his plan to send 21,500 additional U.S. troops to secure Baghdad and Iraq's troubled Anbar Province "will need more time to take effect," especially since fewer than half of the troop reinforcements have arrived in the capital. "There will be good days and bad days ahead as the security plan unfolds," Mr. Bush added.

But Mr. Bush made his case about Iraq to an American public that feels much different today about the war than it did four years ago, notes CBS News chief White House correspondent Jim Axelrod.

Today 39 percent of Americans say invading Iraq was the right thing to do. Four years ago that number was 69 percent.

Democrats are bringing up this week in the House a war spending bill that would effectively require the withdrawal of U.S. troops from Iraq by the fall of 2008, on top of providing funding for the wars in Iraq and Afghanistan for the year. The White House has been pushing aggressively against this legislation, and Mr. Bush did so again on Monday.

"It can be tempting to look at the challenges in Iraq and conclude our best option is to pack up and go home," he said. "That may be satisfying in the short run. But I believe the consequences for America's security would be devastating."

Democrats reacted harshly to the president's statement. They called it an open-ended commitment to a losing strategy.

"The American people have lost confidence in President Bush's plan for a war without end in Iraq," said Pelosi. "That failed approach has been rejected by the voters in our nation, and it will be rejected by the Congress."

Democrats also sought to refute Mr. Bush's assertion that the House bill would reduce flexibility needed by the military to win the war.

"There is nothing in this legislation that will be considered this week that micromanages the war," said House Majority Steny Hoyer, D-Md. No military general "will in any way be constrained from the tactics or the strategies that they deem best to employ on the ground in Iraq."

House Minority Leader John Boehner reiterated that Republicans would vote against the bill. Without GOP support, Democrats have been struggling to make sure they have enough votes within their own party.

"Our troops have not quit on us, and Republicans will not quit on them," said Boehner, R-Ohio, who has predicted "99 percent" of GOP lawmakers will vote against the Democratic proposal.

"We will not stop until they listen to the American people and change course in Iraq," Reid said.

While Mr. Bush did not mention anything he would have done differently in leading the U.S. war effort, earlier Monday, Secretary of State Condoleezza Rice conceded the administration's focus on Baghdad, politically at least, may have been a miscalculation.

"We might have looked to a more localized, decentralized approach to reconstruction," she told The Early Show co-anchor Hannah Storm.

Mr. Bush almost contradicted that remark in his speech by again highlighting Baghdad, and the success of the federal government, as the key element to success in the war.

Asked what was the biggest mistake made in Iraq by the Bush administration, Rice said: "I don't doubt that we will know the answer to that question, but it's hard to judge when you're in middle of something."

In the opening days of the war, General David Petraeus asked the still unanswered question: "Tell me how this ends."

Now the top commander in Iraq, Petraeus may not be able to answer his own question, reports CBS News national security correspondent David Martin. The American military simply doesn't have much control over what Frederic Kagan of the American Enterprise Institute says it will take to end this war.

"It ends with a political solution," says Kagan. "It ends with the Sunni and the Shia and the Kurds coming to an agreement about how Iraq is going to be governed."

While the U.S.-led coalition quickly toppled Saddam, he wasn't captured until December 2003. He was executed this past December after being convicted of ordering the killings of Shiites in the 1980s.

The war has become unpopular with a majority of Americans now opposed to it. Democrats won control of Congress in 2006 largely on an anti-war platform and are pushing bills that set timetables for the withdrawal of U.S. troops over Bush administration objections.

Fifty-three percent of those responding to a CBS News poll marking the four-year anniversary of the start of the war said it was "not very likely" the U.S. would succeed in Iraq.

In March 2003, as President Bush officially announced the beginning of the war and authorized the bombing of Baghdad, 66 percent of those polled believed fewer than 1,000 U.S. troops would die in Iraq.