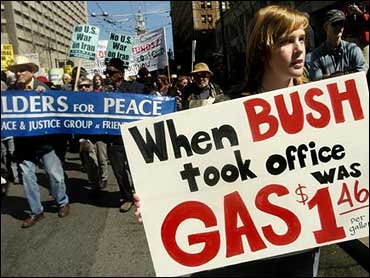 In four years, the United States has spent close to $500 billion on the war in Iraq — more than the total for the Korean War and nearly as much as 12 years in Vietnam, adjusting for inflation. The ultimate cost could reach $1 trillion or more.

A lot of money? No question.

But even though the war has turned out to be much more expensive than Bush administration officials predicted on the eve of the March 2003 invasion, it is relatively affordable — at least in historical terms.

Iraq eats up less than 1 percent of the nation's gross domestic product, compared with as much as 14 percent for Vietnam and 9 percent for Korea.

"I think it's hard to argue it's not affordable," said Steven M. Kosiak, director of budget studies at the Center for Strategic and Budgetary Assessments, a defense think tank in Washington, D.C.

The problem, he and other budget analysts argue, isn't so much the overall cost of the Iraq war. It's the way the government has chosen to pay for it.

For one thing, war funding for both Iraq and Afghanistan has come in the form of supplemental appropriations outside the normal federal budget process. Typically these "supplementals" are used to pay for unexpected emergencies such as Hurricane Katrina, and they receive much less scrutiny from Congress.

President Truman quit asking for supplementals after the first year of the Korean War. The Vietnam War started appearing in the federal budget beginning in 1966, the year after regular troops were committed.

But after four years the Iraq war is still being funded with supplementals. In December, congressional budget leaders from both parties sent a letter to President Bush asking him to start paying for Iraq through the traditional budget process. The administration has done that in its 2008 budget year request — but not before asking for another $100 billion supplemental to keep the war going through the end of this year.

And during previous wars, presidents have asked Americans to make tough sacrifices in order to help pay for the war effort, said Robert Hormats, a managing director at Goldman Sachs and author of the forthcoming book "The Price of Liberty: Paying for America's Wars."

Virtually every war in U.S. history has required the government to borrow at least some money, Hormats said. But Franklin D. Roosevelt also eliminated some New Deal programs and cut others to help pay for World War II (the most expensive of American wars, it cost more than $2 trillion in inflation-adjusted dollars). Truman raised taxes and slashed domestic spending to help pay for Korea.

"No such thing has occurred" during this war, Hormats lamented this month during a panel discussion held at the New School's Schwartz Center for Economic Policy Analysis in New York City. "This war we had no reassessment of fiscal policy, no alteration of fiscal policy to make room in the budget to pay for the war."

Instead, the war is being paid for with debt.

Administration officials downplay the war's cost and the growing defense budget, which will be larger by the end of this year than at any time since World War II.

Defense Secretary Robert M. Gates acknowledged in Congressional testimony last month that his department's 2008 budget request, along with supplemental funding for the war, had produced some "sticker shock." But he pointed out that defense and war spending is still only about 4 percent of the nation's total economic output, a much smaller fraction that it has been historically.

If anything, notes former Nebraska Sen. Bob Kerrey, that's a testament to how big and strong the U.S. economy has become in the past few decades.

"We've demonstrated tremendous capacity to do a very, very expensive program," said Kerrey, a Democrat who now serves as president of the New School.

He and others say that the continued strength of the economy itself is a demonstration of the war's affordability. But with projections that the costs of Social Security and especially Medicare are about to go through the roof — not to mention the possibility of future national security crises — the war is contributing to a fiscal problem that is expected to become increasingly apparent over the course of the next decade.

And the war's costs will continue to accrue long after the last U.S. troops finally leave Iraq. A recent study by Linda Bilmes of Harvard University's Kennedy School of Government put the total cost of providing medical care and disability benefits to veterans of Iraq and Afghanistan at $350 billion to $700 billion.

That huge cost is partly a result of the number and type of casualties the Iraq war has produced. Troops in Iraq have a much better chance of surviving serious injuries than those wounded in previous wars; there have been 16 troops wounded there for every fatality, compared to 2.6 injuries per death in Vietnam and 2.8 in Korea.

"While it is welcome news and a credit to military medicine that more soldiers are surviving grievous wounds, the existence of so many veterans, with such a high level of injuries, is yet another aspect of this war for which the Pentagon and the administration failed to plan, prepare and budget," Bilmes wrote in a January working paper.

In a study co-authored with Columbia University economist and Nobel laureate Joseph Stiglitz, Bilmes estimated that the real price of the Iraq war, when you add up spending to date, future costs and economic impacts such as elevated oil prices, is well over $2 trillion.

That's an impressive number. But it needs to be compared to the cost of leaving Saddam Hussein in power, said Steven J. Davis, a business professor at the University of Chicago.

"You might even still today hold the view that the other path would have been more costly in economic terms than the path we've gone down," Davis said.

Davis and two colleagues considered that possibility in a working paper they have presented several times and circulated through the National Bureau on Economic Research.

The Chicago team put the potential cost of such outcomes at anywhere between $50 billion and $700 billion. That's a shockingly broad range, and where the true figure lies depends on how much of a threat Saddam Hussein would have become had he remained in power — something nobody really knows.
MATT CRENSON
MATT CRENSON