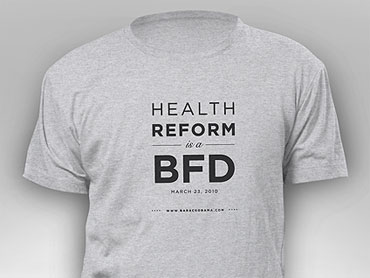 Organizing for America, the Democratic National Committee organization dedicated to mobilizing millions of people who supported Barack Obama in the presidential election, has come up with what it hopes will be a big f***king fundraising success.

OFA is selling t-shirts deeming health care reform a "BFD" -- a reference to an utterance by Vice President Biden to President Obama at the signing of the bill that passage is "a big f***ing deal."

The t-shirts, which cost $25, includes the date the bill was signed (March 23rd), and comes with this product description: "There are things that are a big deal -- birthdays, anniversaries, the NCAA Championship game. And then there are things that are a BFD, like delivering health insurance to 32 million Americans. We worked hard together to make health reform a reality, and now you can celebrate this historic victory with this shirt."

Watch CBS News Videos Online
OFA pushed the shirts in Google ads and a special fundraising page on its Web site yesterday, offering the t-shirt in exchange for a donation of $25 or more.

Organizing for America National Press Secretary Lynda Tran told the Atlantic that the shirt was meant to serve as "a little tongue in cheek fun, something supporters could connect with."

While Biden's comment was seen by some as the latest embarrassing utterance by a gaffe-prone politician, many Democrats, including members of the Obama administration, have embraced the vice president's foul-mouthed description of the importance of the passage of health care reform.