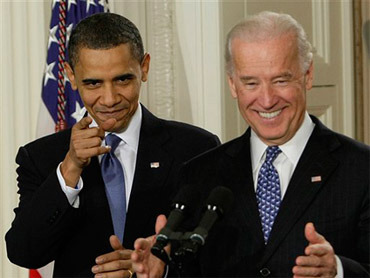 Vice President Joe Biden couldn't resist telling President Obama yesterday that signing comprehensive health care reform into law was a "big f***ing deal." It turns out, a number of people on the Internet agree with him.

The micro-blogging site Twitter may be the perfect medium for capturing fleeting, interesting moments like Biden's remarks. Another Twitter user decided to preserve the moment with a new feed called BigFnDealer. The first message left on the feed reads, "FDR had the New Deal. Truman had the Fair Deal. J-Biden's gives us the Big F***ing Deal."

One online t-shirt retailer is exploiting the moment with t-shirts featuring Biden's profound statement, as well as t-shirts poking fun at Biden for being prone to such gaffes. There's also t-shirts smugly expressing the same sentiment as Biden: "I voted for Obama and all I got was this historic victory on health care," it reads.

Of course, the quote has also inspired some new Web sites: www.thisisabigf***ingdeal.com (the actual URL uses the full expletive) has a YouTube clip of the moment -- which you can watch below. And for anyone who wants to learn more about the man who uttered those words, the site www.abigf***ingdeal.com (again, the URL uses the full expletive) redirects visitors to the White House biography of Biden.