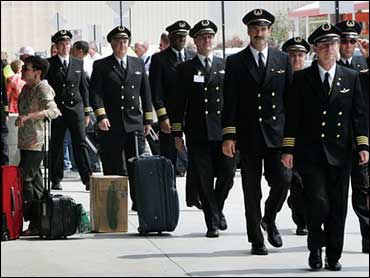 Almost 275 Delta Air Lines Inc. pilots marched through the world's busiest airport Thursday to vent their anger over the company's effort to throw out their contract so it can impose up to $325 million in long-term pay and benefit cuts.

The pilots for the nation's third-largest carrier have stepped up picketing at airports around the country and other demonstrations of unity despite a warning to turn down the noise issued by the arbitration panel considering the company's contract rejection request.

The panel chairman, Richard Bloch, told both sides after hearings in Washington ended March 23 to get a consensual deal done, saying if the panel is left to decide it could be disastrous to Atlanta-based Delta and its 5,930 pilots.

The pilots have said they will strike if their contract is voided.

"You can consider today's actions an exercise and you can stand by for the real thing," Lee Moak, chairman of the pilot union's executive committee, said as he led the line of 273 uniformed pilots who quietly filed through Hartsfield-Jackson Atlanta International Airport.

While the union has been vocal, the company has made the decision to say very little.

Company spokesman Bruce Hicks said, "We won't comment on the status of negotiations in any way."

Moak said union and management officials have met twice since the end of the arbitration hearings, but he would not characterize the meetings as negotiation sessions because each side's positions remained unchanged.

The company has agreed to reduce its demand to $305 million in long-term pay and benefit cuts, while the union has said it is offering $140 million in annual cuts.

"We would be happy to turn down the noise if the senior executives turned down the noise and removed the 1113 motion," Moak said, referring to the motion to reject the union contract.

The arbitration panel has until April 15 to decide on the company's motion. A strike authorization vote by union members is scheduled to wrap up April 4.

Delta has said a strike would put it out of business.

Meanwhile, Delta, which is cutting management jobs as part of its effort to reduce corporate overhead costs by $200 million a year, said Wednesday that its marketing chief is leaving the bankrupt company.

Paul Matsen's departure was announced in a message from Chief Executive Gerald Grinstein to employees. Matsen, 46, has been with Delta for 12 years.

The airline, which filed for bankruptcy on Sept. 14, said eight days later that it would cut up to 9,000 jobs, and recently it said of those cuts 1,000 would be "merit" positions, which include managers and support staff.

Grinstein told employees that the executive vice president of marketing position will not be filled as part of the airline's streamlining efforts.

Other management changes are expected to be announced in early April, but top officials like Grinstein, Chief Financial Officer Ed Bastian and Chief Operating Officer James Whitehurst are not expected to be affected.

Grinstein did not say in his message whether Matsen resigned or was let go, or what his future plans might be.