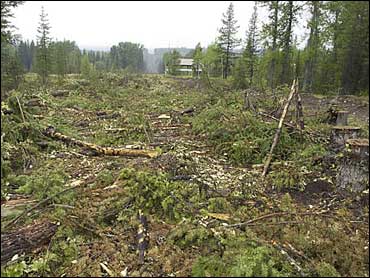 The speed of global deforestation has slowed because of new planting and natural forest extension, but the world's forests are still being destroyed at an alarming rate, a U.N. agency said Monday.

An average of 18 million acres of forest was lost annually in the last five years, down from 22 million acres a year between 1990 and 2000, the U.N. Food and Agriculture Organization said, presenting figures from a new report. The numbers measure net loss, meaning that they take into account forest growth from new planting and natural expansion of existing forests.

"The deforestation continues at an alarming rate, but thanks to efforts in planting new trees and restoring degraded lands as well as (the forests') natural expansion in some regions, the net loss is a little lower," said Mette Loyche Wilkie, the coordinator of the agency's Global Forest Resources Assessment 2005.

Wilkie said that deforestation, mainly the conversion of forests to agricultural land, continues at a rate of about 32 million acres per year.

The five-year report, which covers 229 countries, also found that forests now cover about 30 percent of the total land area, with nearly 9 billion acres. More than half of the world's forest area is found in the Russian Federation, Brazil, Canada, United States and China combined, the agency said.

The decrease of forest area is mainly due to deforestation or natural disasters that make the land incapable of regenerating on its own, Wilkie said.

Deforestation was most extensive in South America, where an average of 10.6 million acres were lost annually over the last five years, followed by Africa with 9.8 million acres, the Rome-based agency said.

North America and Oceania saw smaller forest losses over the same period, while forest areas in Asia and Europe grew, according to the FAO.

"There's reason to be very optimistic," said Hosny El-Lakany, the agency's assistant director-general for forestry. "Deforestation is going down and, maybe, it will go further down in the future," he said.

The full report will be released in January, the agency said.