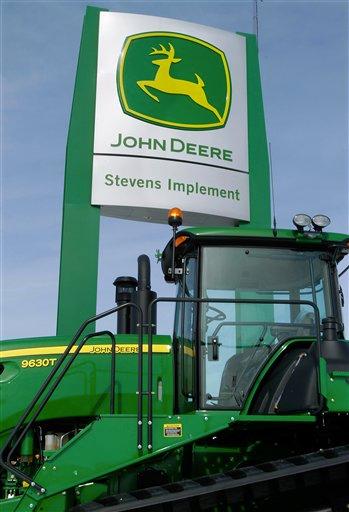 The company also raised its earnings prediction for the fiscal year. Deere's shares showed a gain of less than 2 percent in midday trading after rising as much nearly 4 percent shortly after the market opened.

That beat analyst expectations of 97 cents per share, according to a survey by FactSet.

Total revenue rose 27 percent to $6.12 billion. Equipment sales in the United States and Canada leaped 35 percent in the quarter. Outside those core regions, sales were up 22 percent for the quarter. Sales were helped by a 2 percent increase in prices.

Deere's sales increase was driven by demand for heavy farm equipment, with revenue for four-wheel-drive tractors and large combines rising more than 50 percent. Such machines can cost hundreds of thousands of dollars, but a boom in crop prices has left U.S. farmers flush with cash.

The global price of corn and wheat has roughly doubled since July, while soybeans jumped 56 percent. That's encouraged farmers to plant crops on every possible acre of soil, said Susan Karlix, Deere's manager of investor communications. Farmers feel confident in forking over cash, or taking on debt, to buy new Deere equipment as global crop prices continue to climb.

"Our order books are strong," Karlix told analysts during a conference call. Even demand for used Deere tractors and rentals has jumped, she said.

Deere's Agriculture and turf sales by 21 percent during the quarter, on a combination of higher demand and prices.

Deere said construction demand is up as well. Construction and forestry sales climbed 81 percent, and the unit turned an operating profit in the quarter from a loss in fiscal 2010. Higher costs for raw materials slightly weighed down results.

Strong demand from farmers is expected to continue through 2011. A survey by the Kansas City Federal Reserve released this week found that half of farmers in the central United States expect their income to rise over the next three months. Farmer's capital spending closely tracks their income, according to the bank.

Deere projects equipment sales will rise 18 to 20 percent during the current fiscal year that ends in October, and about 25 percent in the current quarter.

It predicts net income this fiscal year of about $2.5 billion, up from a November prediction of $2.1 billion. Analysts currently predict $2.37 billion.

Worldwide sales of agriculture and turf equipment are forecast to increase by about 16 percent in 2011.

Deere's worldwide sales of construction and forestry equipment are forecast to rise by about 35 percent this year on higher wood and pulp prices and improved construction equipment sales to rental companies.