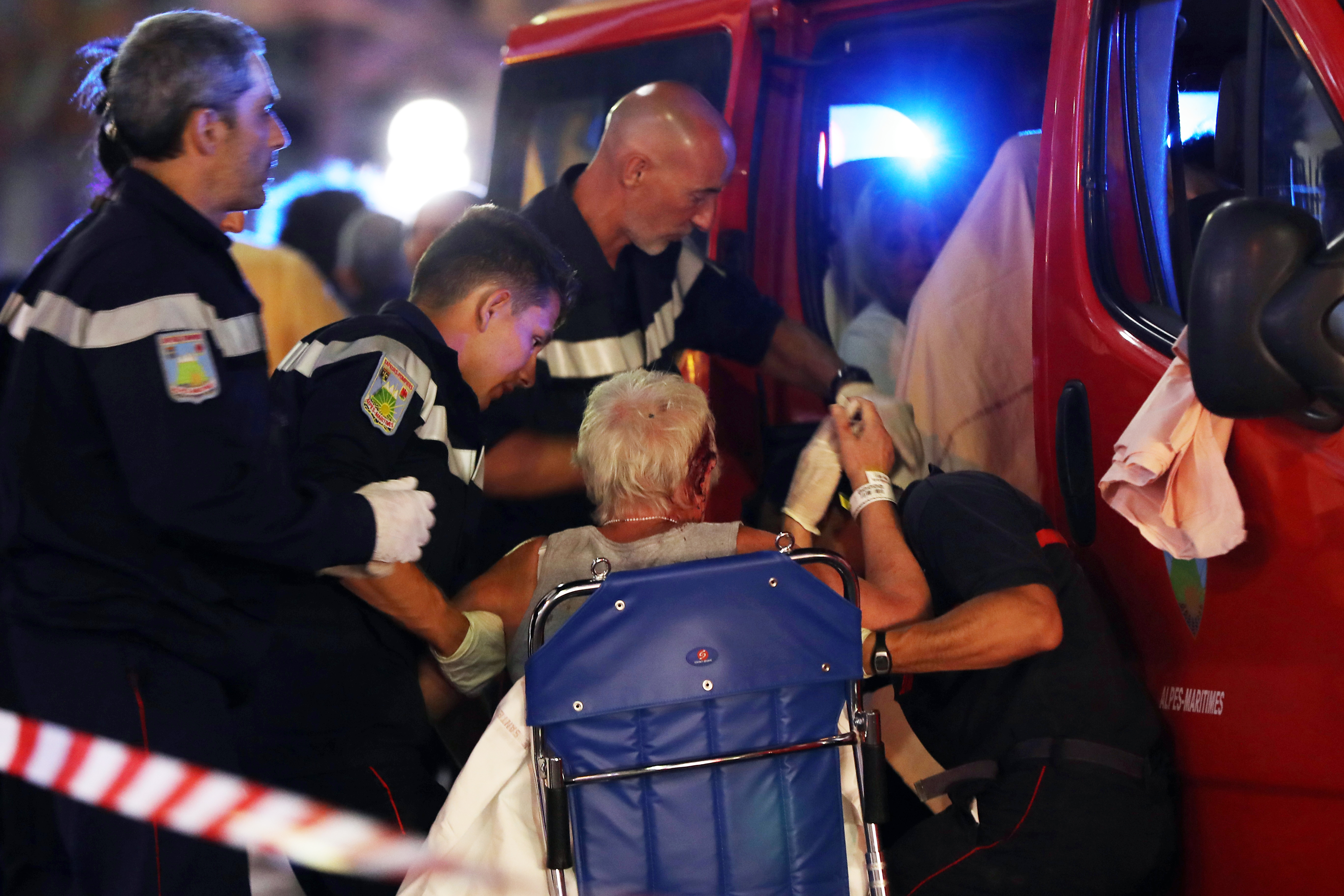 NICE, France -- A truck drove on to the sidewalk and plowed through a crowd of Bastille Day revelers who'd gathered to watch fireworks in the French resort city of Nice late Thursday in what some officials and eyewitnesses described as a deliberate attack.

French Interior Minister Bernard Cazeneuve said 80 people have died, some of them children, and 18 people are in critical condition. Numerous others have been wounded, he said after traveling to the scene.

"The identification of the criminal is in progress," he said, refusing to confirm reports that an ID card was found after police shot the truck driver dead.

"We are in a war with terrorists who want to strike us at any price and in a very violent way," Cazeneuve said.

French network BFM TV said the victims were pedestrians on the famed Promenade des Anglais along the Nice waterfront.

Sylvie Toffin, a press officer with the local prefecture, said the truck "hit several people on a long trip" down the sidewalk near Nice's Palais de la Méditerranee, a building which fronts the beach. Some estimates say the truck went over a mile through the crowd before being stopped.

Toffin confirmed the incident was deliberate, saying, "It's an attack."

"The driver fired on the crowd, according to the police who killed him," Christian Estrosi, the mayor of Nice, told BFM TV.

Estrosi said the driver appeared to have "completely premeditated behavior." He added that "the truck was loaded with arms, loaded with grenades."

The Paris prosecutor's office said it had open a terrorism investigation into the crash.

Almost exactly eight months ago, ISIS militants killed 130 people in a series of attacks in Paris.

Prior to the attack, Hollande said Thursday that he planned to allow the state of emergency imposed after the November attacks to expire.

In his speech early Friday, Hollande said he now wants to extend the state of emergency by three months. That decision will need parliamentary approval.

Hollande said he will call a defense council meeting Friday that brings together defense, interior and other key ministers, before heading to Nice.

Besides ensuring continuation of the state of emergency and the Sentinel operation that puts 10,000 soldiers on patrol, he said he was calling up reserve to help police, particularly at French borders.

The White House released a statement from President Obama on Twitter, condemning "what appears to be a horrific terror attack."

U.S. Attorney General Loretta Lynch also condemned the attack and offered her thoughts and prayers to the victims and their families.

"The Department of Justice has reached out to our French counterparts to offer our assistance in the investigation," Lynch said in a statement.

Secretary of State John Kerry, in Moscow to meet with Russian President Vladimir Putin, said the U.S. Embassy in Paris was "making every effort to account for the welfare of U.S. citizens in Nice." Kerry asked Americans who were in Nice to contact their family and friends to let them know they are safe.

"I was proud to stand alongside French leaders earlier today at Bastille Day celebrations in Paris, and the United States will continue to stand firmly with the French people during this time of tragedy,' Kerry said. "We will provide whatever support is needed.‎"

Wassim Bouhlel, a Nice native who spoke to the Associated Press near Nice's Promenade du Paillon, said that he saw a truck drive into the crowd and then witnessed the man emerge with a gun and start shooting.

"There was carnage on the road," Bouhlel said. "Bodies everywhere."

"It's a scene of horror," local member of parliament Eric Ciotti told France Info, saying the truck had sped along the pavement fronting the Mediterranean, "mowing down several hundred people."

While the incident in Nice appears to be deliberate, U.S. law enforcement has no official analysis of what happened, CBS News Justice and Homeland Security correspondent Jeff Pegues reported.

Law enforcement officials said it was too early to know who was involved.

The hashtag #PrayForNice quickly soared to the top of Twitter's trending section, with thousands of people expressing their thoughts on social media.

Presumptive Republican presidential nominee Donald Trump tweeted that he had delayed the announcement of his running mate, which was scheduled for Friday morning, due to the incident in Nice.