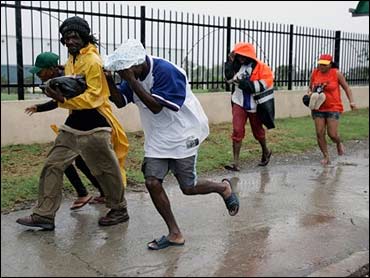 Hurricane Dean pummeled Jamaica with gusting winds and torrential rains, tearing the roofs off homes, triggering landslides and flooding roads as tourists holed up in resorts behind storm-proof walls.

The prime minister made a last minute plea for residents to abandon their homes and head for shelter, but many residents ignored the call.

The first hurricane of the Atlantic season storm, which had already killed eight people on its destructive march across the Caribbean, triggered evacuation calls from the Cayman Islands to Texas, and forced the space shuttle to cut short its mission.

Cruise ships changed course to avoid Dean, but some tourists in Jamaica could not get away before the island closed its airports Saturday.

The storm is on course for northern Mexico, but could shift and hit the southeast coast of Texas, where hurricane preparations are underway.

"If I was a Texas resident, particularly along the southeast coast, I would make sure I was ready," R. David Paulison, the head of the Federal Emergency Management Agency, told reporters in Washington. "This is not a time to be complacent."

A state of emergency was declared in the resort town of South Padre Island. About 3,300 jail and prison inmates in the area were to be bused to correctional facilities elsewhere by Sunday night.

Paulison said up to 100,000 people might have to be evacuated from the state's southeastern coast and its immigrant shantytowns near the Mexican border.

Hurricane force winds began lashing Jamaica on Sunday afternoon, but the island was spared a direct hit when Dean's eye wound up passing just to the south Sunday night.

One man called a local radio station to say his roof had just blown off. The line then went dead.

Police got into a shootout with looters at a shopping center in the central parish of Clarendon, but nobody was hurt, Constable Cheree Greaves said. Assistant Commissioner of Police Linval Bailey said curfews were in effect until Monday evening. Authorities also cut power on the island to prevent damage to the power grid.

Maj. Richard Reese, a corrections department official, said the roof of a prison block was partially torn off and some inmates had to be moved. None escaped.

"The all-clear has not been given as yet," he told The Associated Press on Sunday night. "Dean is still affecting the island with hurricane-strength conditions."

The government set up more than 1,000 shelters in converted schools, churches and the indoor national sports arena. Authorities urged people to take cover from the storm, which had maximum sustained winds of 145 mph and could dump up to 20 inches of rain.

But only 47 shelters were occupied as the storm began hitting, said Cecil Bailey of the Office of Disaster Preparedness and Emergency Management. More people trickled in later.

"For the last time, I'm asking you to leave or you will be in danger," Prime Minister Portia Simpson Miller urged residents earlier as the storm loomed offshore.

As of 11 p.m. Sunday, Dean was located about 135 miles west-southwest of Kingston and was traveling west at 20 mph, the National Hurricane Center said.

George Lee, mayor of the Portmore community near the capital Kingston, said appeals to evacuate had gone unheeded. Some islanders said they were afraid of losing their belongings if they moved to shelters.

"Too much crime in Kingston. I'm not leaving my home," Paul Lyn said in Port Royal, east of Kingston.

Many tourists who did not get flights out took shelter at places like Sandals Whitehouse, a resort with buildings capable of withstanding a powerful storm.

Trinice Tyler, a postal worker from Lake Elsinore, California, said she would weather the storm there "on my knees praying."

"I'm celebrating my 40th birthday today, and it's going to be a birthday to remember," she said. "I have mixed emotions. It's exciting, but I'm nervous. Am I going to make it home?"

Earlier in the day, fishermen hauled their skiffs inland and cruise ships changed their course to avoid the storm. Local media reported that 17 fisherman were stranded on the Middle Keys, small islands 90 miles south of Jamaica. The Jamaica Defense Force urged them to break the padlocks off a building to seek shelter, Nationwide News Network reported.

Forecasters had predicted Dean would hit the Cayman Islands head-on, but on Sunday night said it would instead likely pass to the south. Still, the islands could receive up to 12 inches of rain and tropical-storm strength winds on Monday, said Waddington.

The National Hurricane Center said the first hurricane of the Atlantic season was projected to then reach the most dangerous classification, Category 5, with sustained winds of 160 mph, before plowing into Mexico's Yucatan peninsula on Tuesday. The Mexican mainland or Texas could be hit later.

In Galveston, Texas, residents remembered the 2005 Hurricane Rita evacuation when motorists from the coast ran into residents fleeing Houston, clogging evacuation routes for miles. Officials say they've worked out the kinks in the system, but many Galveston residents were skeptical.

"I've talked to a lot of people about this," resident Chuck Lee said. "They'd rather die in their homes than die in their cars on some highway."

In the Cayman Islands, tourists were ordered to board shuttle buses for the airport. Hundreds of frantic vacationers lined up at ticket counters for special flights home, and many slept on the airport floor. Cayman Islands Gov. Stuart Jack said all but 1,500 tourists were evacuated from the British territory by Sunday afternoon.

"It's kind of spooky," said George Mitchell, of Detroit, who missed his flight out. "We don't know what to do or where to go. It freaks you out."

Jack said a curfew would be imposed Sunday night "to ensure that everybody has taken cover" and that two British Royal Navy vessels would arrive Monday to provide emergency aid.

"I am confident that we are in the best possible position to face this storm," he said. "Everyone take care and God bless."

In Mexico, tourists also streamed out of resorts on Yucatan peninsula and formed long lines at the airport to try to fly home. Twelve empty planes arrived Sunday to move travelers out, airport spokesman Eduardo Rivadeneira said. The state government set up 530 shelters with a capacity of 73,000 people.

The hurricane created massive waves and surges high as 20 feet as it passed the Dominican Republic on Saturday, flooding roads and drowning a boy. At least two people were killed and about 150 homes were destroyed in Haiti, emergency officials said.