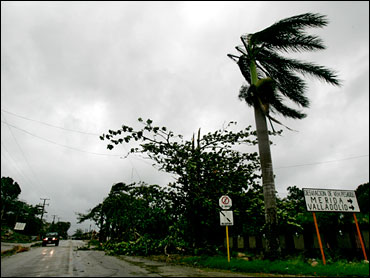 Hurricane Dean swept across the Yucatan peninsula Tuesday, toppling trees, power lines and houses as it bore down on the heart of Mexico's oil industry. Glitzy resorts on the Mayan Riviera were spared, but vulnerable Mayan villages were exposed to the full fury of one of history's most intense storms.

President Felipe Calderon said no deaths were immediately reported in Mexico, after Dean killed 13 people in the Caribbean. But driving rain, poor communications and impassable roads made it difficult to determine how isolated Mayan communities fared in the sparsely populated jungle where Dean made landfall as a ferocious Category 5 hurricane.

Dean weakened over land but is expected to strengthen as its eye moved over the Bay of Campeche, home to more than 100 oil platforms and three major oil exporting ports. The sprawling, westward storm was projected to slam into the mainland at about 5 p.m. ET on Wednesday, with renewed force near Laguna Verde, Mexico's only nuclear power plant.

"We often see that when a storm weakens, people let down their guard completely. You shouldn't do that," said Jamie Rhome at the U.S. National Hurricane Center. "This storm probably won't become a Category 5 again, but it will still be powerful."

At 5 p.m. EDT, Dean had winds of 80 mph and was centered about 60 miles west-southwest of Campeche. The storm was moving west at 20 mph, the National Hurricane Center said.

For all its power, Dean's path was fortunate, taking it across one of the most sparsely populated sections of the coastline—near the cruise ship port of Costa Maya, which had largely been evacuated, reports Solorzano.

While 50,000 tourists were safely evacuated from resorts on the Yucatan peninsula, many poor Indians closer to the storm's direct path refused military orders to leave their homes, according to Gen. Alfonso Garcia, who was running shelters in Felipe Carrillo Puerto, 30 miles north of the eye's path.

Troops evacuated more than 250 small communities, and 8,000 people took refuge in 500 shelters, said Jorge Acevedo, a Quintana Roo state spokesman. Others turned away soldiers with machetes and refused to leave, but some of them changed their minds when the winds and rain intensified, he said.

Little was known about the thousands who rode out the storm in low-lying communities of stick huts or the handful who hid from soldiers evacuating smaller resorts like Majahual, where Dean made landfall with 165 mph winds and gusts of 200 mph — faster than the takeoff speed of many passenger jets.

"I'm really worried the hurricane passed over the Mayan communities, which are the poorest on the Yucatan peninsula," Calderon said before leaving Canada on a flight to Chetumal.

"If only the government would lend us a hand," said Georgina Hernandez, 59, whose three children all lost their homes in the town of Los Limones.

Dean's path takes it directly through the Cantarell oil field, Mexico's most productive. The entire field's operations were shut down just ahead of the storm, reducing daily production by 2.7 million barrels of oil and 2.6 billion cubic feet of natural gas.

Insured losses from the storm are likely to range between $750 million and $1.5 billion, according to Risk Management Solutions, which calculates hurricane damage for the insurance industry. Most of that was in Jamaica, which Tuesday postponed its Aug. 27 general elections, in order to take time to survey the damage.

Dean hit Mexico early Tuesday along a sparsely populated coastline, well to the south of major resorts. The brunt of the storm struck the state capital of Chetumal, where residents spent a harrowing night with windows shattering and heavy water tanks flying off rooftops. Sirens wailed for hours as the storm battered the city, hurling billboards down streets. The Federal Electricity Commission said 90,000 customers remained without power by midday.

Electricity was also out to most of Belize, where no deaths or major injuries were reported. Just south of the Mexican border in Corozal, Dean flipped a residential trailer, blew roofs from homes and flooded streets.

Mexico's National Anthropology and History Institute said no damage was reported at any of the archaeological sites in the states of Quintana Roo and Yucatan. Officials also closed all sites in Campeche and Veracruz and took measures to safeguard them as Dean approached.

The latest forecast puts the storm on target to hit land again Wednesday afternoon at Tecolutla, a coastal river town about halfway between Tampico and Veracruz. The area is an oil industry hub, dotted with derricks and pipelines on land and home to many of the workers who maintain seven oil platforms a half-hour helicopter ride offshore.

Veracruz has been Mexico's most famed Gulf port since the days of Hernan Cortez and is famed for its African-inflected music. Tampico, 260 miles up the coast, is a grittier port city, a center of Mexico's oil industry in its early days. Between the two is a land of fishing, farming and oil with a lush, palm-dotted shoreline, cut with rivers flowing into the usually placid Gulf of Mexico.

North of Veracruz is a strip of resorts known as the Emerald Coast, and seven more oil platforms are just offshore. Laguna Verde, Mexico's only nuclear power plant, is only 35 miles to the south, and hundreds of buses stood by to evacuate workers if necessary.

The hurricane's projected path cuts 400 miles south of Texas, where only heavy surf was expected. The space shuttle Endeavour landed a day early Tuesday because of the threat NASA had once feared Dean would pose to Mission Control in Houston.

President Bush, standing by Calderon's side at a summit in Montebello, Quebec, offered U.S. aid to Mexico.

"The American people care a lot about the human condition in our neighborhood, and when we see human suffering we want to do what we can," Bush said.

Dean was the third-most intense Atlantic hurricane to make landfall since record keeping began in the 1850s. It had a minimum central pressure of 906 millibars, the third-lowest at landfall after the 1935 Labor Day hurricane in the Florida Keys and Hurricane Gilbert, which hit Cancun in 1988.

The deadliest storm to hit Latin America in modern times was 1998's Hurricane Mitch, which killed nearly 11,000 people and left more than 8,000 missing, most in Honduras and Nicaragua.