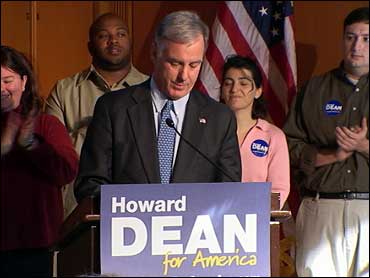 
In an interview just before Christmas, Howard Dean described his relationship with God as a "pretty personal one." Dean, who if nominated would be a stark secular contrast to his opponent President Bush, says because he is from New England, he usually does not talk about religion. But as curiosity about the political views of the Democratic front runner increases, so do the questions about his religious views.

Dean grew up attending an Episcopal school going to church every day and twice on Sundays. After leaving his Episcopal church years ago because of a dispute over a bike path, Dean now belongs to a Congregationalist church in Burlington, VT. The governor considers himself to be "a pretty devout Christian." In 1981, Dean and his wife Dr. Judy Steinberg, who is Jewish, were married by a judge in a civil ceremony. They've raised their children Jewish. Dean says having different faiths in the same home hasn't created any problems.

"I think it's actually kind of neat to live in a home where one of the two partners is from the religion that gave birth to Christianity," Dean said in the December interview conducted in his campaign van while driving through New Hampshire. "Remember that in the first century Jesus was considered a Jew and he considered himself to be a Jew. In fact he is a Jew - was a Jew. So, the closeness between Judaism and Christianity is extraordinary."

Dean rarely talks about religion on the stump, yet in recent interviews, he has said he will probably do so more, especially in the south "where people are expected to talk more about religion." For a private man from the northeast, it takes some getting used to.

"I think that I'm gradually getting more comfortable with talking about religion in ways that I did not talk about it before," Dean told a group of reporters on board his charter during a recent flight from New Hampshire to Iowa. "It doesn't make me more religious or less religious than I was before, but it means I'm willing to talk about it in different ways."

While the governor said he prays daily, he declined to discuss the whens or wheres in further detail, choosing to keep the matter personal. And of course the demanding schedule of a Presidential candidate doesn't allow for much time in church. "I don't go to church that much because I don't have a lot of time for that particularly in this milieu," Dean said prior to the campaign's Christmas break.

During that break the governor still didn't find time to attend church for Christmas services. "He wanted to spend as much time with his family as he possibly could," said campaign spokesman Doug Thornell.

Dean's rivals for the Democratic nomination approached the holiday in different ways. Senator Joseph Lieberman, the only Jewish candidate among the group (although some candidates have discovered Jewish relatives), worked in a soup kitchen on Christmas. Lieberman regularly attends synagogue.

Senator John Edwards attended church in Raleigh, NC with his family. Retired General Wesley Clark, who usually attends church in Arkansas for Christmas, was in California visiting his son. At 2:30 Christmas morning, the general was woken with news that his daughter-in-law had gone into labor, interrupting any plans of going to church that day. Clark attended a service on New Year's day. A spokesman for Dick Gephardt was unsure of whether or not the congressman went to church for Christmas but said "probably not." Senator John Kerry did attend Christmas services.

President Bush attended a candle light service on Christmas Eve with his family. Bush, a born again Christian, typically ends his addresses with some variation of "God bless the United States of America." Dean ends his speeches either with "Thank you very much" or "You have the power!" Asked if he would end a speech accepting the Democratic nomination for President with "God bless America," Dean sidestepped the question saying "I don't know, since not a single vote has been cast, I think it's a little presumptuous for me to be thinking about my speech just yet."

Dean often rejects the notion of a campaign waged over "guns, God, and gays." He wants to attract voters in the Midwest and South by sticking to his main themes of jobs, health care, and education. But as Dean has seen from visits to South Carolina, many voters care quite a bit about some of the issues he'd rather avoid. Should Dean go on to face George Bush in the general election, he'll have to figure out a way not only to speak comfortably to those who want to hear about his views on religion, but also to do so without seeming like he is pandering with some sort of new found religious fervor he discovered just in time to run for President.