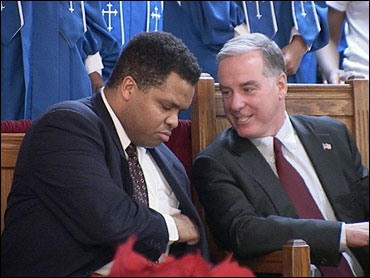 
When Howard Dean found himself in trouble because of his remarks regarding the Confederate flag, he received some much-needed support from Rep. Jesse Jackson, Jr., who had made his intention to endorse Dean known just days before the flag gaffe. Almost immediately after the comments, Jackson, D-Ill., reiterated his support using his prominence within the African-American political world to help stem the tide of criticism against Dean.

On Sunday, after attending a church service with Dean in Jackson's home state of South Carolina, the congressman made his endorsement official. He even went so far as to add a little pep. "I enthusiastically endorse Howard Dean for President," Jackson shouted over the roaring applause at the Clarion Town Inn in West Columbia, S.C.

The crowd of 350 to 400 Dean supporters was clearly excited to have Jackson's endorsement for their candidate. With Rep. Jim Clyburn, D-S.C., expected to endorse Dick Gephardt's presidential run, Jackson's backing for Dean provides some balance to the former Vermont governor's effort to capture the votes of African Americans in South Carolina.

But first, he'll have to capture their attention.

While hundreds of supporters gathered in the hotel's ballroom to cheer on both Dean and Jackson, the vast majority of them were white. According to Delacey Skinner, the Dean campaign's South Carolina spokeswoman, 87 of those attending were African American. However, a glance around the room had reporters asking about the poor black turnout. Some of them may have been hard to see, Skinner said, because they were standing in the back and off to the side, having come in late.

Early on in his campaign, Howard Dean was often criticized for a lack of diversity among the audiences gathering to hear him speak. The endorsements of the racially diverse labor unions SEIU and AFSCME were supposed to change all that.

The candidate crowed proudly at a labor rally in November that the media would no longer "dare" label his campaign as lacking diversity. Yet in South Carolina, a state with a 27 percent African-American population and the expectation that 40 percent of voters in the Democratic primary will be African American, Dean was unable to draw a significant number of blacks to the event – even with native son Jesse Jackson, Jr. scheduled to speak.

Dean's campaign saw things differently. "For South Carolina, the audience at today's rally was very diverse," said Skinner. "Most events that I go to in South Carolina are either solidly white or solidly black."

Like, for example, the opening of Dean's Columbia, S.C., campaign headquarters, where approximately 50 people gathered outside the office for a ribbon-cutting ceremony attended by Dean and Jackson. Again, the vast majority of those on hand were white. "We're getting there," said one Dean staffer in response to questions about why only a handful of minorities turned out.

Another Dean supporter explained that some of the African-American staff members in South Carolina were away attending a leadership initiative seminar at the time of the headquarters opening.

"I think you find people where they are and not necessarily invite them all and they all show up," Dean said.

He cited his attendance earlier that morning at a small black church and the fact that almost all of the people there were black. Of course, the churchgoers weren't there to see the governor; they were there to worship.

Jackson offered his own explanation as to why more minorities had not come in person to hear him announce his support for Dean. "The Bible Belt. South Carolina. African Americans, not only in the South but in Chicago, on Sunday can be found in church."

Skinner backed up Jackson's explanation that many blacks in the area were still in church at the time of the event. "At an African-American church down here, a communion Sunday service can go four hours," she said.

Perhaps it was all just a matter of poor scheduling.

There is no doubt that the Dean campaign is trying to get more African-American support. The campaign has been courting key minority endorsements and receiving strong results so far. Sunday evening, after Jackson's announcement, Dean received the backing of another black congressman, Rep. Bobby Scott of Virginia. Dean also has the endorsement of Rep. Elijah Cummings, D-Md., the chairman of the Congressional Black Caucus.