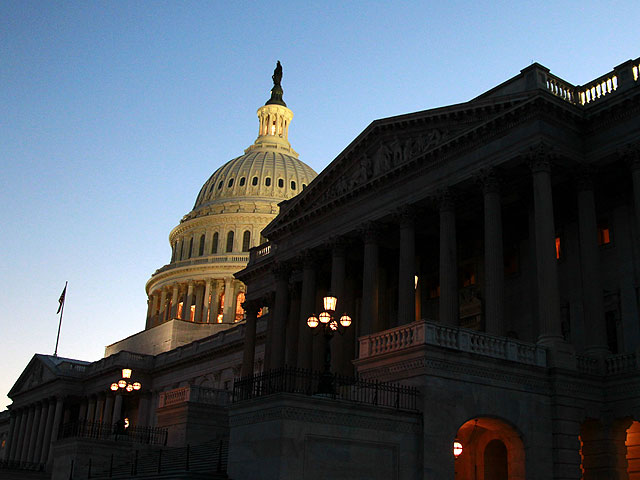 Rep. David Camp, R-Mich., and Sen. Max Baucus, D-Mont., the two top negotiators, strode from a conference room minutes after midnight Thursday to say that only technical issues and the drafting of legislative language remained. The bill would assure a continued tax cut for 160 million workers and jobless benefits for several million others, delivering top election-year priorities for President Barack Obama.

"It's a very good deal for the country," said Baucus, who chairs the Senate Finance Committee.

There had been last-minute disputes over exactly how to pay for this package. President Obama is understood to have even made phone calls, reports Nancy Cordes

Republicans gave up their long-held insistence that this payroll tax cut had to be paid for with spending cuts elsewhere. That would have meant that negotiators would have had to find $150 billion in spending cuts instead of $50 billion.

Democrats feel that they won, but Republicans think they have neutralized an election year issue preventing the president and Democrats from attacking them for holding up a tax cut for the middle class.

That contrasted with December, when House Republicans refused to back a bipartisan Senate bill providing a two-month extension of the tax cuts and jobless benefits while bargainers completed a yearlong deal — only to retreat under barrages of criticism from Republicans and conservatives around the country.

Still, there were disconcerting hints that last-minute problems might still crop up. Neither Baucus nor Camp would predict whether Congress would approve the legislation by Friday, the original goal. And aides did not distribute summaries of the bill to reporters, which is usually routine when major accords are reached.

Even so, Baucus and Camp — and a handful of other lawmakers who helped craft the package — expressed confidence that their work on the roughly $150 billion measure was virtually complete.

The temporary payroll tax cut and extra unemployment coverage initially ran into GOP resistance, some of which lingers.

Underscoring that they had learned the consequences of seeming to block a middle-class tax cut, House Republicans removed the major hurdle to the legislation earlier this week when they agreed that the payroll tax cut — comprising about two-thirds of the measure's cost — would not have to be paid for with spending cuts.

The bargainers spent Wednesday trying to extinguish last-minute brushfires as some members of Congress sought changes in a tentative agreement that aides had described Tuesday.

Chief among the late disputes was a proposal to save around $15 billion — about half the $30 billion cost of the bill's extended jobless benefits — by requiring federal workers to contribute an additional 1.5 percent of their pay to their pensions.

Democrats, including Sen. Ben Cardin and others from Maryland, home to many government employees, resisted that plan, holding up a final handshake among congressional bargainers. The provision was ultimately changed to target the boost only at newly hired federal workers, requiring them to contribute 2.3 percent of their salaries toward defined benefit pensions.

There was little controversy over the main thrust of the bill.

A 2-percentage-point cut in the 6.2 percent Social Security payroll tax, which is deducted from workers' paychecks, would run through 2012. For a family earning $50,000 a year, the cut saves them $1,000 annually.

Extra unemployment benefits for people out of work the longest would be extended for the same period, and a 27 percent slash in federal reimbursements for physicians who treat Medicare patients would be averted.

Unless Congress acts, the tax cut and added jobless benefits would expire and doctors' Medicare payments would be reduced — all on March 1.

In a GOP win, the bill would phase down the current maximum 99 weeks of jobless coverage to 73 weeks in the hardest-hit states by autumn, though most states would get no more than 63 weeks.

Besides increasing new federal workers' pension contributions, more savings were supposed to come from government sales of parts of the broadcast spectrum to wireless companies. The spectrum auction was supposed to raise about $15 billion — even after $7 billion would be spent for a new communications network for emergency workers.

The government's main welfare program would be continued through this year. Republicans won a provision barring welfare recipients from using their electronic cards to withdraw cash from teller machines in liquor stores, strip clubs and casinos.

The $20 billion price tag for preventing the cut in doctors' Medicare reimbursements would be covered partly by trimming a fund Mr. Obama's health care overhaul created to help prevent obesity and smoking. There would also be reductions in Medicaid payments to hospitals that treat high numbers of uninsured patients.

Dropped from the final compromise were proposals to renew expiring business tax cuts; a GOP plan to require unemployment recipients to work toward high school equivalency diplomas; and another Republican provision, aimed at illegal immigrants, requiring low-income people to have Social Security numbers before they can get checks from the Internal Revenue Service for the children's tax credit.