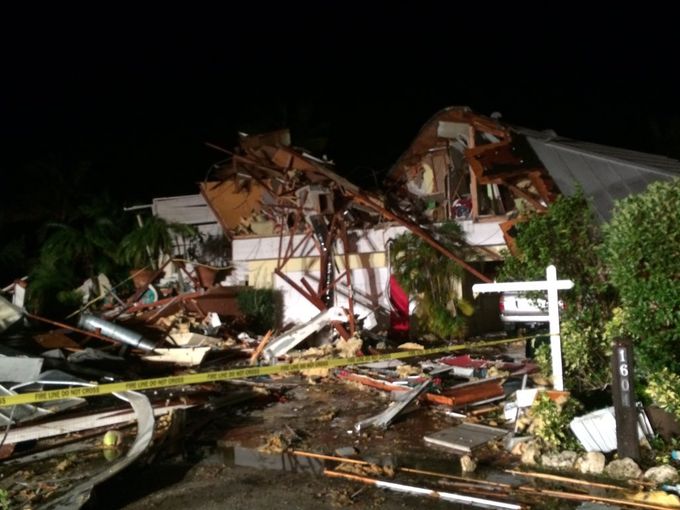 CBS affiliate WTSP in Tampa reports at least four tornadoes touched down in the county.

Manatee County Sheriff Brad Steube says that two adults were killed and five people injured, including four children, when a tornado touched down in central Florida.

"I'm amazed to see anybody got out of this alive," said Steube during a news conference.

Steube said two adults, their adult son, and their four grandchildren were inside a mobile home when the twister hit. Steven Wilson died in the tornado when it ripped the mobile home apart. Wilson's wife, Kate, was taken to a hospital and died from a heart attack. Their son, also named Steven Wilson, crawled out of the wreckage and helped his four children out of the house. They are being treated at a hospital for non-life threatening injuries.

Numerous homes and businesses were also damaged during the storms that brought the tornadoes, although officials were unable to provide a damage assessment overnight.

The National Weather Service in Ruskin, Florida, said a tornado touched down in Duette in Manatee County at 3:45 a.m.

Minutes later, another twister struck near the beach community of Siesta Key in Sarasota County.

Siesta Key is a barrier island known for its pricey condos and wide, gorgeous beaches. On Sunday morning, about 17,000 residents in the area were without power, the Sarasota County Emergency Management office said on its Facebook page.

Sarasota County officials reported damage to multiple homes near Siesta Key. At least one home was destroyed and a woman had to be pulled from the wreckage by first responders. Other damage reports include roofs being blown off homes.

Rodney Wynn, a NWS meteorologist, said a survey team determined that Duette, about 50 miles southeast of Tampa, was struck by a category EF2 tornado, with winds of between 111 mph and 135 mph. Teams were still surveying the tornado that hit Siesta Key, he said.

Tornadoes aren't unheard of in beach communities, but they aren't common either.

"It does happen, especial in an El Nino year," Wynn said. "It's not common, but it's very possible."

The Sarasota Police Department early Sunday reported downed trees and power lines and minor flooding. Officials in Tampa closed the Skyway Bridge, a major thoroughfare, Sunday morning for the second time since midnight after wind speeds reached up to 50 mph with wind gusts up to 60 mph.