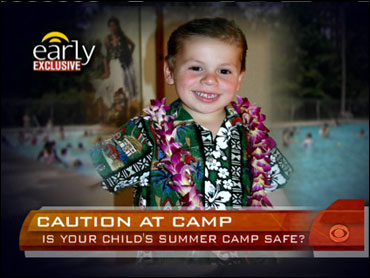 Parents, beware: A complete lack of federal oversight of summer camps and what at best is a patchwork quilt of state and local oversight leave your kids more vulnerable than you probably think when you entrust them to the care of such camps. And those in the know urge that you do a comprehensive check yourself of camp facilities, policies and other pertinent matters before signing your kids up.

On The Early Show Wednesday, consumer correspondent Susan Koeppen told the story of two parents whose four-year-old son was killed in his very first day at what was billed as a top-shelf camp in their hometown of Santa Barbara, Calif.

Anat Gottesman says her son "was a very happy, cheerful boy. ... He was full of life."

In the summer of 2005, Yoni Gottesman's parents took him to summer camp. It was supposed to be a fun and exciting experience.

"I remember when I left him in the morning," Anat recalled, "he barely said goodbye. He said, 'Mommy, I'm so happy. Bye-bye. See you later." '

But that was the last time Anat would see her son alive.

Her husband, Oded Gottesman, says, "All of a sudden I get a phone call, asking me if I'm Yoni's father. And I said, 'Yes.' She asked me to come to the club, because he had some accident."

It was captured on a surveillance video that shows a camp counselor dunking Yoni over and over again in the water, a dozen times. Next, Yoni struggles to swim to the edge of the pool, as the counselor turns his back to play with other children. Finally, Yoni is floating face-down in the pool. Even with two lifeguards on duty and counselors in the water, it took eight minutes before anyone noticed.

Yoni died an hour later at a hospital.

"We just couldn't understand how, you know, that could have happened," Oded says. "Everything we did was everything normal parents would do."

The Gottesmans would later learn the Cathedral Oaks Athletic Club had been operating its kids' camp without a license.

But, Koeppen points out, there are no federal regulations when it comes to camps. Rules vary greatly from state-to-state. Six states don't require camps to be licensed at all. Twenty-eight states don't require criminal background checks of camp employees. And, according to the American Camp Association, only 25 percent of camps in the United States are accredited, meaning they meet the 300 health and safety standards set by the association.

"I think," says Dr. Edward Walton, a pediatrician, "the word 'camp' is sometimes used too lightly."

Walton is a member of the American Camp Association. He says the onus falls on parents to check camps carefully, because there's no guarantee a state or local agency is doing it.

"Just the word 'camp' could give parents the false sense of security that, of course, somebody's checking to make sure this is a safe place," Koeppen remarked to Walton.

"Right," he responded. "Just like the word 'school,' the word 'camp' has certain connotations in regards to safety and oversight."

"So, anyone can use the word 'camp,' whether they know what they're doing with kids or not?

"Anybody can use the word 'camp," Walton confirmed, "and that's why parents really need to be careful."

The Gottesmans sued the club in whose camp Yoni drowned, and a jury recently awarded them $16 million.

They are, says Koeppen, on a mission to warn other parents about the lack of oversight at so many camps across the nation.

"We want to feel that Yoni didn't die in vain," Anat says, "that his death at least will serve a good purpose. And if we can save more kids' lives, that's what we want to do."

Through an attorney for the club, CBS News requested, and didn't get, an interview or comment.

Koeppen says parents "need to ask a lot of questions. Find out if the camp is accredited. If not, find out why not. Also, ask simple questions, such as, 'How far away is the nearest hospital? How long would it take for an ambulance to get to your facility?' These are simple questions you need to ask. 'What is the staff-to-child ratio?' The American Camp Association has a lot of information you need to know before you send your kids."

State-by-state guide as to licensing, regulation and background checks