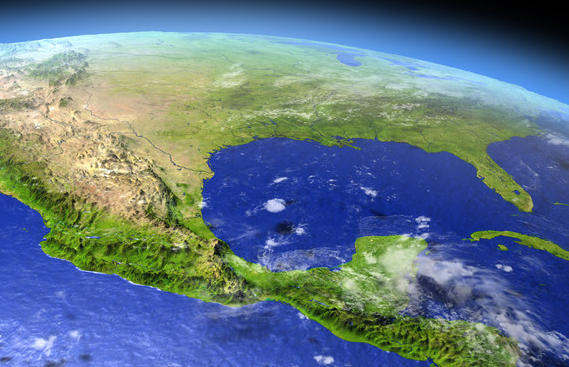 Ian Hendy is Senior Scientific Officer at the Institute of Marine Sciences, University of Portsmouth

Each summer, a large part of the Gulf of Mexico "dies". This year, the Gulf's "dead zone" is the largest on record, stretching from the mouth of the Mississippi, along the coast of Louisiana to waters off Texas, hundreds of miles away. Around 8,776 square miles of ocean, an area the size of New Jersey or Wales, is almost lifeless.

John Muir, the famed naturalist and early conservation campaigner, once said that: "When we try to pick out anything by itself, we find it hitched to everything else in the Universe." His point was that everything in nature is connected, and that no part of our ecosystem exists entirely independently from any other.

It is perhaps no surprise then that ultimate cause of the Gulf of Mexico's dead zone can be found many miles inland. Fertilizers used by farmers then wash into the Mississippi River and eventually into the sea, where nutrients such as nitrogen and phosphorus stimulate an explosion in microscopic algae, creating huge "algal blooms." The algae then die and sink to the bottom, where they decompose. But the same bacteria which decompose the algae also use the sea's oxygen during the process, leaving an "anoxic" ocean.

Fish and other mobile sea creatures are able to escape the suffocating dead zone. Less lucky however are the sponges, corals, sea squirts and other animals who live their lives fixed in one place on the sea bed. Low oxygen levels place them under great stress and we have seen huge mortalities. Such losses will of course ripple up the food web, creating a negative chain reaction of increasing mortality rates in larger and larger animals.

The "dead zone" has grown this year due to increased rainfall in America's Midwest washing ever greater amounts of nutrients into the Mississippi, which ultimately end up in the Gulf. Not only is this a huge conservation issue – the Gulf contains key nursery habitats such as mangrove forests, sea grass beds and coral reefs that benefit adjacent fisheries – but it also has huge consequences for the local fishing economy, particularly the shrimp industry.

Steps are under way to slow down the ecological disaster. Some farmers in the Mississippi basin are using large grassy zones along waterways in order to soak up the agricultural fertilizers and filter out many of the nutrients before they make their way down the Mississippi to pollute the Gulf. However, it remains to be seen whether such measures are effective – and U.S. farmers certainly need to greatly reduce the nitrogen and phosphates they use.

In the century since Muir's death, things have sped up. A larger population demands more food which means more deforestation, more farmland and more fertilizer. The increase demand placed on our land is ultimately affecting the marine environment.

These losses are unsustainable. The marine environment is integral for all life on earth, from an ecological and economic point of view. If we keep losing ecosystem services such as coastal nursery habitats and spawning grounds at this current rate, it will not just be an area the size of a state that is a dead zone, but the whole Gulf, or even whole oceans.