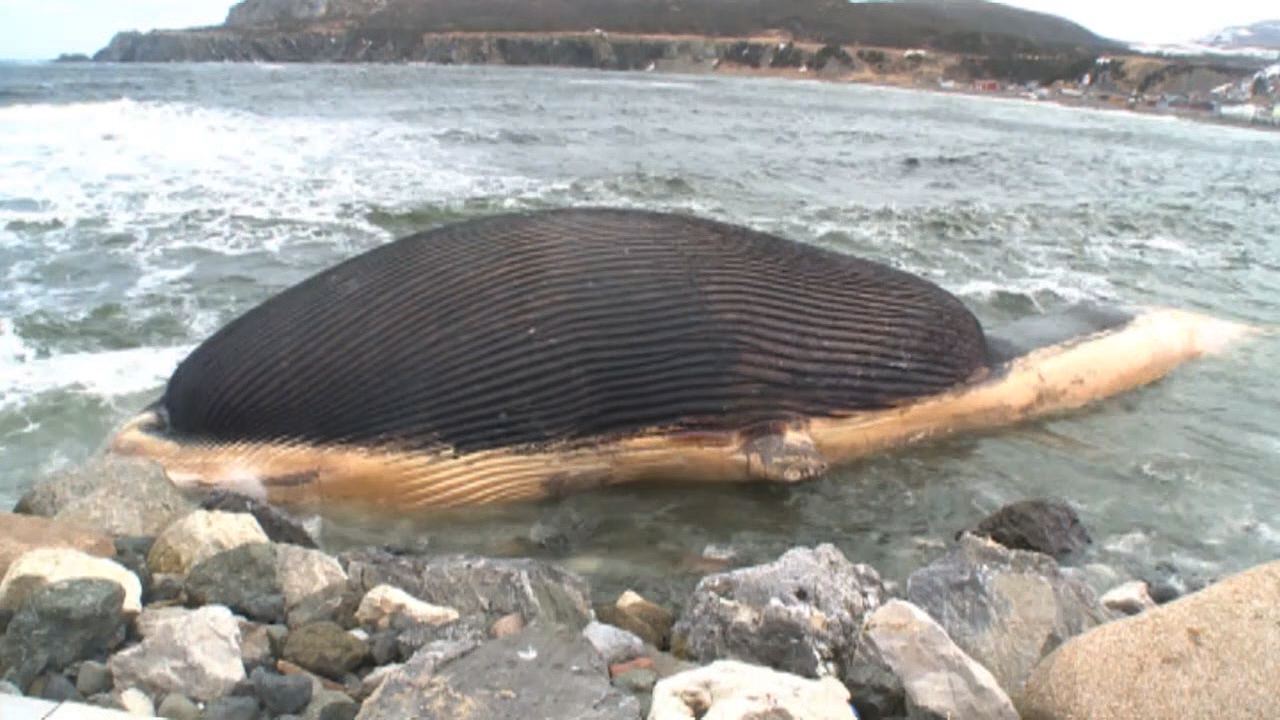 TROUT RIVER, Newfoundland -- The 60-ton carcass of a blue whale is rotting along the shoreline of a town on Canada's east coast, triggering concerns from the community it could burst.

Emily Butler, the town clerk in Trout River, Newfoundland said Tuesday the 26-meter blue whale is beached next to a community boardwalk and is emitting a powerful stench that is spreading through the town of 600 people. Butler said she and others in town are concerned that the methane gas caused by decomposition could cause the animal to burst.

"We have a concern ... because I'm not sure with the heat and gases that are trapped inside of this mammal if at some point in time it will explode," Butler said.

But Jack Lawson, a research scientist with Canada's Fisheries Department, said the risk of such a blast is "very small."

"At some point, the skin of the animal will lose some of its integrity as all of the connective tissue starts to break down," Lawson said. "Eventually, that gas will seep out. ... It will just deflate like an old balloon."

Still, Lawson said people should stay away from the carcass, which could be carrying viruses or bacteria that can make people sick.

"The risk will come from somebody with a sharp blade who decides they want to cut a hole in the side to see what happens, or if someone is foolish enough to walk on it," Lawson said.

He said he is aware of YouTube videos showing a bloated, beached sperm whale in the Faroe Islands that suddenly explodes as a scientist uses a large, flensing knife to cut open its underside. (Warning: The video below contains graphic content).


"With this animal (in Newfoundland), it's highly unlikely that it's going to happen, especially spontaneously," he said.

The scientist said large, beached whales can either be buried with heavy equipment or cut up and shipped to a landfill.

Butler asked for help from the province's Environment and Government Services departments as well as the federal Fisheries Department to remove the carcass. Butler said the town council considered asking fishermen to tow the mammal out to sea but concluded such a task would need to be supervised by someone with expertise. "Nobody has been properly trained in the removal of whale carcasses of this size," she said.

The whale is one of three beached along Newfoundland's west coast.

Exploding whales are no anomaly. In 2004, a dead sperm whale exploded while being transported to a research center in Taiwan. At the time, BBC News reported: "Passers-by and cars were soaked in blood and body parts were sprayed over a road after the bursting of the whale, which was being carried on a trailer."