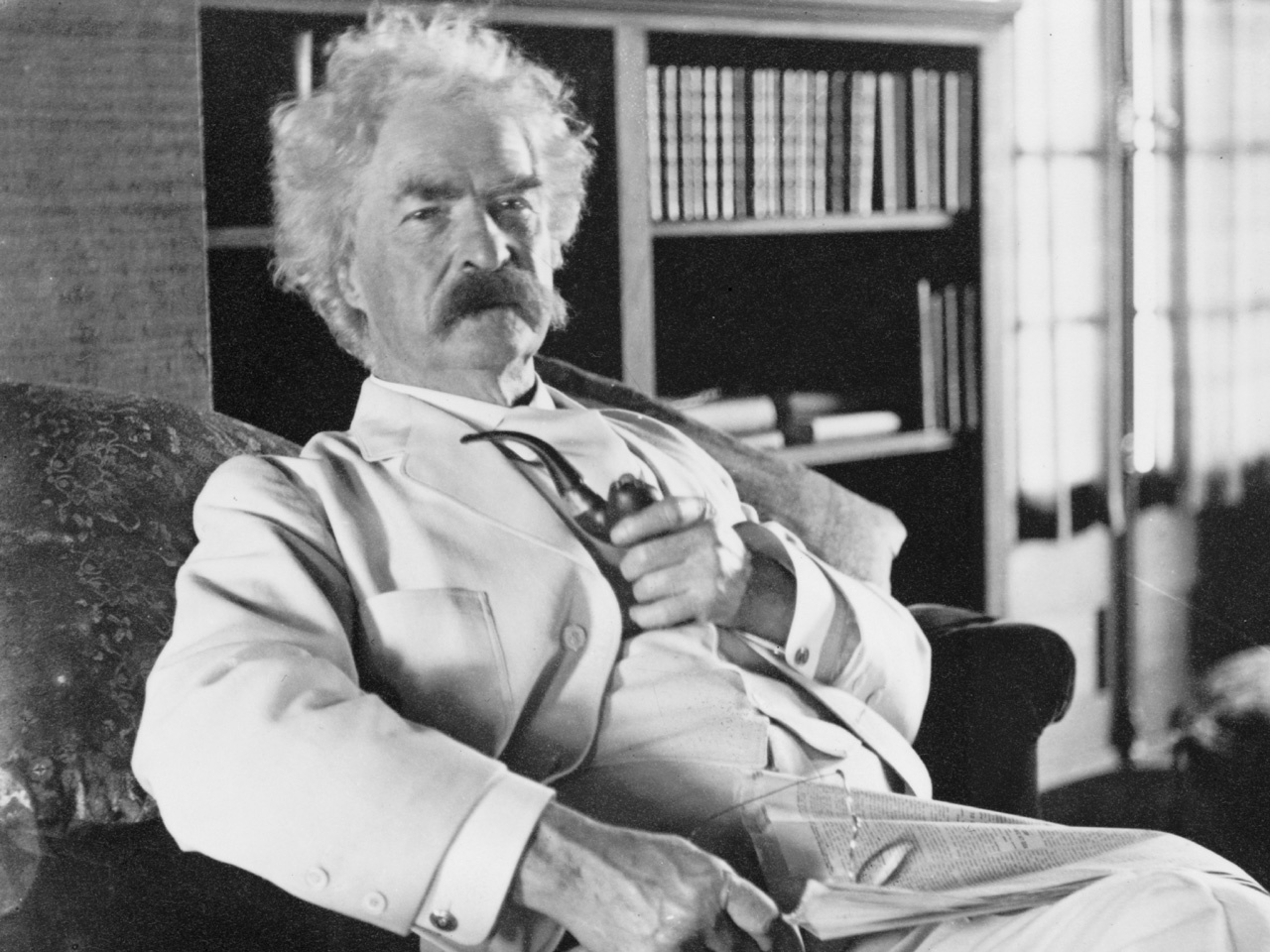 (CBS News) "The Adventures of Mark Twain" isn't the actual title of the memoir by the author of "The Adventures of Huckleberry Finn." But the story of how this book is finally coming to be published is a bit of an adventure tale all its own. Jeff Glor has it for us, chapter and verse:

It's been 100 years since Mark Twain died, after declaring, "If I cannot swear in heaven I shall not stay there."

Wherever he is, a century later, the words and stories he left behind live on . . . on stage ("Oh, I used to tell lies," declaimed Twain actor Hal Holbrook, "but I've given it up - the field is overrun with amateurs") . . . in movies . . . and of course, in books, the most famous of which, "The Adventures of Huckleberry Finn," still captivates readers around the world.

"They always played hookey, and went on rafts down the Mississippi," explained young Ben Mark Braider. "I would like to do that one day - not play hookey, just go on a raft."

Now, all these years later, there's a NEW book by Mark Twain: His autobiography, about to be published as he specifically instructed, 100 years after his death.

Robert Hirst is curator of the Mark Twain Papers at UC Berkeley, where a small army of editors has been laboring for six years to reconstruct the autobiography just as Twain wished it to be.

Glor asked if he could believe that the end of their long process was finally here. "Actually, we can't!" laughed Hirst.

Comedian Lewis Black, who sees himself and all modern humorists as descendents of Twain, can't believe it, either.

"His book is coming out right around when mine is," Black said. "Given the choice, I'd buy the Twain book . . . I'm sure my publisher will be thrilled to hear that!"

"Mark Twain had a very tender heart," said Hirst. "He liked to say nasty things - he's really good at it - but he didn't like the idea of being there when the person heard them, and was hurt by them!

"That's one aspect of the 100-year embargo. The other is just freeing him up to say exactly what he [thought], and so in a way he doesn't have anyone looking over his shoulder."

Anyone who was looking over his shoulder may have thought the old man had lost it.

The autobiography is highly unconventional, in many ways ultra-modern - not telling one straight story from birth until death, but skipping around.

"Mark Twain wants this autobiography to be random," Hirst said. "You know, he's going to talk about what he wants to talk about on this day, change his mind and move onto the next thing."

You heard that right . . . talk. One of the greatest writers in American history decided the best way to tell his own story was NOT to write it, but SPEAK it.

Daily dictations over four years, about whatever he found interesting that day.

"I would say that is exactly right," Hirst said. "Partly a journal, partly a diary, and partly recollection. So yeah, I think of it as a kind of blog, a blog without a web!"

In Twain's words (and there are roughly 650,000 of them) in what will be three volumes, President Theodore Roosevelt is "one of the most impulsive men in existence" . . . the American soldiers Roosevelt sent to the Philippines Twain called "uniformed assassins" . . . and then there's his Italian landlady, who's "excitable, malicious, malignant, vengeful, unforgiving, selfish, stingy, avaricious, coarse, vulgar, profane, and obscene" . . . and that's just for starters.

There are funny, fond stories of his family, and his raw, stunned heart-break at his daughter Suzie's sudden death.

But if you're expecting a tabloid tell-all, Twain admits he failed at that.

"In the third month of the dictation he says, 'You know, I can think of a thousand shameful things I've done in my life, and I've not got one of them to go on paper yet," said Hirst.

When Twain began dictating, the man famous worldwide for his white suit, his best-selling novels, and his rip-roaring lectures was, in his own words, "the most conspicuous person on the planet."

The humorist had a serious side as well - anger at the atrocities he witnessed as he travelled the world, which he put into words, and had illustrated . . . now on display at the Morgan Library in New York City.

Isaac Gewirtz, one of the curators of the exhibition, described Twain's account, in "Following the Equator" (1897), of a South African farmer's treatment of the native population "very stark, very appalling."

"He invited a group of natives to his farm for Christmas dinner," said Gewirtz. "Told them the plum pudding he was serving was a traditional dish when they worshipped the Lord, and he laced it with arsenic, and they died a horrible death."

Despite his outrage at human cruelty, Twain often censored his published work, not wanting to alienate his audience - or jeopardize his family's livelihood…

"I know there's certain things in this book," said Lewis Black, "if I read them out loud now, on CBS, people will freak out - and that's 100 years ago!"

Which may help explain why, when Twain decided to write a no-holds-barred autobiography, people close to him were "terrified," said curator Declan Kiely. "He was holding forth, letting loose all his innermost feelings about his million friends.

"And he actually found it necessary to reassure his daughter that 'I won't bury you alive.'"

"All you have to do is look at the last three months of the web and the newspapers to see that he was right," said Hirst. "He knew how to market it. Just say it can't be read for 100 years. That'll do it!"

"You know, publishing it a hundred years later, saying 'Here it comes, here it comes, here's the dirt, ha ha ha . . .' He's good!" said Black. "You gotta love him. It's one of the most brilliant marketing schemes outside of Facebook."

So, whether he opted for the climate of heaven, the company in hell, or some other spot, one thing is certain: 100 years after his death, Mark Twain is still very much here.

Excerpt From "Autobiography of Mark Twain"

Three days ago a neighbor brought the celebrated Russian revolutionist, Tchaykoffsky, to call upon me. He is grizzled, and shows age - as to exteriors - but he has a Vesuvius, inside, which is a strong and active volcano yet. He is so full of belief in the ultimate and almost immediate triumph of the revolution and the destruction of the fiendish autocracy, that he almost made me believe and hope with him. He has come over here expecting to arouse a conflagration of noble sympathy in our vast nation of eighty millions of happy and enthusiastic freemen. But honesty obliged me to pour some cold water down his crater. I told him what I believed to be true - that the McKinleys and the Roosevelts and the multimillionaire disciples of Jay Gould - that man who in his brief life rotted the commercial morals of this nation and left them stinking when he died - have quite completely transformed our people from a nation with pretty high and respectable ideals to just the opposite of that; that our people have no ideals now that are worthy of consideration; that our Christianity which we have always been so proud of - not to say so vain of - is now nothing but a shell, a sham, a hypocrisy; that we have lost our ancient sympathy with oppressed peoples struggling for life and liberty; that when we are not coldly indifferent to such things we sneer at them, and that the sneer is about the only expression the newspapers and the nation deal in with regard to such things; that his mass meetings would not be attended by people entitled to call themselves representative Americans, even if they may call themselves Americans at all; that his audiences will be composed of foreigners who have suffered so recently that they have not yet had time to become Americanized and their hearts turned to stone in their breasts; that these audiences will be drawn from the ranks of the poor, not those of the rich; that they will give, and give freely, but they will give from their poverty and the money result will not be large. I said that when our windy and flamboyant President conceived the idea, a year ago, of advertising himself to the world as the new Angel of Peace, and set himself the task of bringing about the peace between Russia and Japan and had the misfortune to accomplish his misbegotten purpose, no one in all this nation except Dr. Seaman and myself uttered a public protest against this folly of follies. That at that time I believed that that fatal peace had postponed the Russian nation's imminent liberation from its age-long chains indefinitely -probably for centurties; that I believed at that time that Roosevelt had given the Russian revolution its death-blow, and that I am of that opinion yet.

I will mention here, in parentheses, that I came across Dr. Seaman last night for the first time in my life, and found that his opinion also remain to-day as he expressed it at the time that that infamous peace was consummated.

Tchaykoffsky said that my talk depressed him profoundly, and that he hoped I was wrong.

I said I hoped the same.

He said "Why, from this very nation of yours came a mighty contribution only two or three months ago, and it made us all glad in Russia. You raised two millions of dollars in a breath - in a moment, as it were - and sent that contribution, that most noble and generous contribution, to suffering Russia. Does not that modify your opinion?"

"No," I said, "it doesn't. That money came not from Americans, it came from Jews; much of it from rich Jews, but the most of it from Russian and Polish Jews on the East Side - that is to say, it came from the very poor. The Jew has always been benevolent. Suffering can always move a Jew's heart and tax his pocket to the limit. He will be at your mass meetings. But if you find any Americans there put them in a glass case and exhibit them. It will be worth fifty cents a head to go and look at that show and try to believe it."