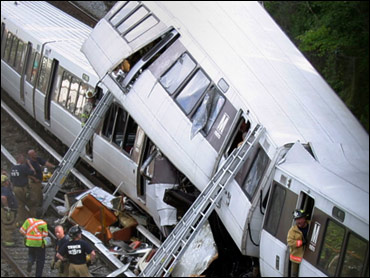 A transit train smashed into the rear of another at the height of the capital city's Monday evening rush hour, killing at least nine people and injuring scores of others as the front end of the trailing train jackknifed violently into the air and fell atop the first.

Cars of both trains were ripped open and smashed together in the worst accident in the Metrorail system's 33-year history. Washington fire spokesman Alan Etter said crews had to cut some people out of what he described as a "mass casualty event." Rescue workers propped steel ladders up to the upper train cars to help survivors scramble to safety. Seats from the smashed cars spilled out onto the track.

The fire department said early Tuesday morning that nine people were confirmed dead in the accident. Fire Chief Dennis Rubin said rescue workers treated 76 people at the scene and sent some of them to local hospitals, six with critical injuries. A search for further victims continued into the night.

A Metro official said the dead included the operator of the trailing train. Her name was not immediately released.

Images from the scene show two Metro cars propped up on the roof of another car. One of the trains was 75-80 percent compressed, officials said at an evening press conference.

(The Washington City Paper has first-hand accounts describing the impact from passengers on both trains.)

President Barack Obama sent his condolences to the victims of the crash.

"Michelle and I were saddened by the terrible accident in Northeast Washington D.C. today," Obama said in a statement issued Monday night. "Our thoughts and prayers go out to the families and friends affected by this tragedy."

The president also thanked rescue personnel who helped to save lives.

The crash around 5 p.m. EDT took place on the system's red line, Metro's busiest, which runs below ground for much of its length but is at ground level at the accident site near the Maryland border in northeast Washington.

Metro chief John Catoe said the first train was stopped on the tracks, waiting for another to clear the station ahead, when the trailing train, one of the oldest in the Metro fleet, plowed into it from behind.

Officials had no explanation for the accident. The National Transportation Safety Board took charge of the investigation and sent a team to the site. Washington police and the FBI also had investigators at the scene to help search the wreckage for any overlooked injured or dead passengers and evidence.

Officials would not say how fast the train was traveling at the time of the accident. The crash occurred in an area with a sizable distance between rail stations in which trains are allowed to travel at higher speeds, Metro spokeswoman Candace Smith said.

The trains' devices that record operating speeds and commands are being turned over to the NTSB, Smith said.

Each train had six cars and was capable of holding as many as 1,200 people. Safety Board member Debbie Hersman said the trains were bound for downtown. That would mean they were less likely to be filled during the afternoon rush hour.

The trains had pulled out of the Takoma Park station and were headed in the direction of the Fort Totten station.

The FBI, the Department of Homeland Security, the Federal Emergency Management Agency and the NTSB all had officials on the scene.

But, "At this early stage, we do not have any clear indication of a nexus to terrorism. We will continue to monitor closely and provide support in any way needed," the DHS said in a statement.

Sabrina Webber, a 45-year-old real estate agent who lives in the neighborhood, said the first rescuers to arrive had to use the "jaws of life" to pry open a wire fence along rail line to get to the train.

Webber raced to the scene after hearing a loud boom like a "thunder crash" and then sirens. She said there was no panic among the survivors.

Passenger Jodie Wickett, a nurse, told CNN she was seated on one train, sending text messages on her phone, when she felt the impact. She said she sent a message to someone that it felt like the train had hit a bump.

"From that point on, it happened so fast, I flew out of the seat and hit my head." Wickett said she stayed at the scene and tried to help. She said "people are just in very bad shape."

"The people that were hurt, the ones that could speak, were calling back as we called out to them," she said. "Lots of people were upset and crying, but there were no screams."

One man said he was riding a bicycle across a bridge over the Metro tracks when the sound of the crash got his attention.

"I didn't see any panic," Barry Student said. "The whole situation was so surreal."

At Howard University Hospital, Dr. Johnnie Ford, an emergency room doctor, said a 14-year-old girl suffered two broken legs in the accident. A 20-year-old male patient "looked like he had been tumbled around quite a bit, bumps and bruises from head to toe," Ford said.

Homeland Security Department spokeswoman Amy Kudwa said less than two hours after the crash that federal authorities had no indication of any terrorism connection.

"I don't know the reason for this accident," Metro's Catoe said. "I would still say the system is safe, but we've had an incident."

Monday's crash was the third major subway or commuter rail crash in a big city in the past nine months. In the earlier accidents:

- In September 2008, a commuter rail train and a freight train crashed in Los Angeles, killing 25 people. The crash was blamed on an engineer on the commuter rail sending text messages on a cell phone.

- Last month about 50 people were injured in Boston when one trolley rear-ended another. The conductor admitted to sending a text message when the crash occurred.

No reason was given for the Washington crash, but some safety experts are concerned about the recent increase.

"I'm not sure if everyone in the safety system is paying the proper attention that needs to be paid," said Barry Sweedler, a San Francisco-based safety consultant and former investigator and manager at the NTSB. "These things shouldn't be happening."

However, Robert Lauby, a former NTSB rail investigator, said the increase in accidents could well be mere coincidence.

"Just because you had them doesn't mean there's a specific issue that caused them," Lauby said.

The only other time in Metrorail's 33-year history that there were passenger fatalities was on Jan. 13, 1982, when three people died as a result of a derailment underneath downtown. That was a day of disaster in the capital - shortly before the subway crash, an Air Florida plane slammed into the 14th Street Bridge immediately after takeoff in a severe snowstorm from Washington National Airport across the Potomac River. The plane crash killed 78 people.

In November, 2004 an empty red line train slid backwards down an incline into a loaded train in Metro's Woodley Park station. Twenty people were hurt.