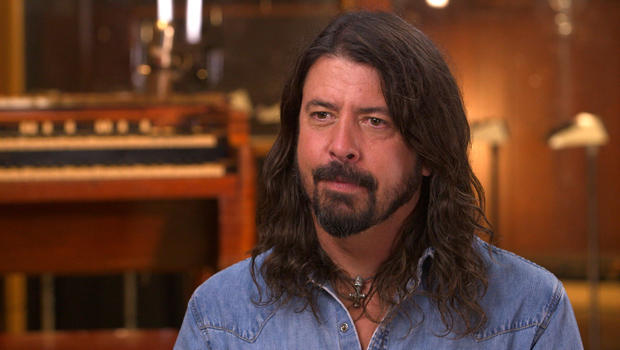 Dave Grohl, founder of the hit rock band Foo Fighters, went into a dark period and couldn't listen to music after the suicide of friend and Nirvana bandmate, Kurt Cobain, he tells Anthony Mason in an interview for CBS' "Sunday Morning," broadcast July 8.

Cobain was found dead of a gunshot wound in his Seattle home in April 1994. At the time, Nirvana was one of the biggest bands in the world.

Grohl described himself, during the time after Cobain's death, as "just lost. I went through a really dark period where I couldn't really even listen to the radio because it broke my heart just to hear music."

Later, Grohl told Mason, he quietly began writing songs and making music by himself. That work led to the creation of the Foo Fighters. The band has earned the Grammy Award for Best Rock Album four times – a record. The band also received the Grammy for Best Rock Song for "Run," off the band's latest record, "Concrete & Gold."

Asked about the great reviews for the album, Grohl says it's "weird."

"Ages ago, when I was a kid, my dad said, 'You know, this isn't going to last, right? Savor every check like it's the last one you're ever gonna make,'" Grohl told Mason. "And every time we make a Foo Fighters record, I think, 'Well, if this were the last one…'"

Grohl also talks about forming the Foo Fighters; surviving a fall (and playing on) during a concert in Sweden; and life as a member of Nirvana.

To watch the Foo Fighters perform "The Sky Is a Neighborhood" from the album "Concrete & Gold," click on the video player below.