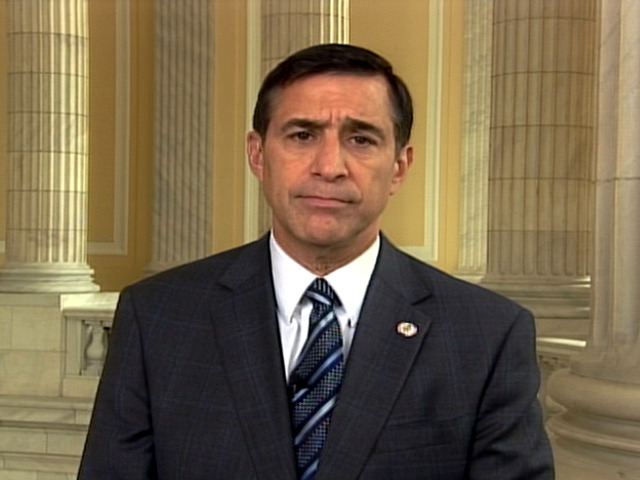 Republican Rep. Darrell Issa of California has hounded President Obama all year about the apparent job offers the White House made to certain Democratic Senate candidates this election season -- and if Republicans win control of the House this November, Issa intends to significantly ratchet up his inquiries into what he sees as potential administration wrongdoing.

As the top Republican on the House Oversight and Government Reform Committee, Issa would become chairman of the committee if Republicans managed to win the majority this fall. If he became chairman, Issa has said he would double his staff from 40 to between 70 and 80, Politico reports. As chairman, he would also have the power to subpoena White House officials to appear before the committee under oath.

"That will make all the difference in the world," Issa said in a recent speech with respect to taking over the chairmanship, according to Politico. "I won't use it to have corporate America live in fear that we're going to subpoena everything. I will use it to get the very information that today the White House is either shredding or not producing."

Issa this year drove GOP inquiries into whether the White House broke any laws when former President Bill Clinton spoke with Rep. Joe Sestak (D-Penn.) about dropping out of the Pennsylvania Democratic Senate primary and possibly taking an advisory job in the executive branch.

Issa has also raised similar questions about whether the White House made any improper offers to Colorado House Speaker Andrew Romanoff to drop out of the Democratic Senate primary in Colorado.

Just last night, House Judiciary Committee Republicans filed a Resolution of Inquiry demanding documents from the Justice Department on the Sestak and Romanoff matters. The resolution asks whether Justice Department attorneys were consulted before White House and affiliated officials had discussions with the two candidates. The Judiciary Committee now has 14 days to bring up the resolution, and Democrats have indicated they may take it up next week.

"House Democrats now face an important choice, they can either condone the secrecy of the White House or join with us in forcing the kind of disclosure the American people deserve," Issa, a member of the committee, said with respect to the resolution.

Politico reports that "Democrats -- and, truth be told, even a few Republicans in the House -- regard Issa as something of a clownish figure, full of bluster and a perfect representative of an age of polarized, cable TV-driven politics... But some Democratic operatives think colleagues are underestimating the threat: A clown with subpoena power is no laughing matter."

David Weigel of the Washington Post contends that Issa's interest in pursuing investigations into the White House may not serve the Republican Party well.

"It's hard to imagine a scenario where an electorate, angry about the economy, hands Republicans the reins of power, and endorses a series of fishing expeditions about scandals that ('jobgate' aside) never got much traction outside of the Washington Times," he writes.