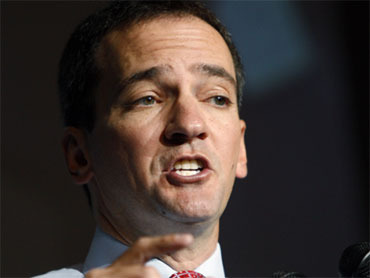 The White House has long made clear it doesn't want former Colorado House Speaker Andrew Romanoff in the Democratic Senate primary in Colorado.

Romanoff's move last night is not going to change their mind.

Romanoff, who is challenging Sen. Michael Bennet, put out a statement alleging that the White House suggested he might have his choice of three jobs if he would drop out of the race.

He said White House deputy chief of staff Jim Messina had called to discuss jobs that "might be available" if he dropped his primary challenge - and even provided to reporters the email Messina sent detailing those jobs.

While Romanoff, who stayed in the race, said "at no time was I promised a job," his statement left the impression that the White House has been engaged in craven political plays.

The timing of the statement could not have been worse, coming less than a week after the White House, under pressure from Republicans and the media, had dealt with a similar allegation involving Pennsylvania Democrat Rep. Joe Sestak. In a memo last Friday, White House Counsel Robert Bauer said the White House had not acted improperly - and added that the current administration's conduct was no different than that of past administrations.

But that, of course, was part of the problem, as Republicans were quick to point out. For a president who campaigned on change, attempted backroom deal-making looks particularly bad.

"The Obama Administration," House Committee on Oversight and Government Reform Ranking Member Darrell Issa said yesterday, "has become the very establishment they once spoke of with such contempt."

The fact that backroom deal-making, as Republicans well know, is an integral (and arguably valuable) reality of politics is not something the administration's critics have been eager to bring up, of course. The White House wants to help Democrats keep their Congressional majority, without which passage of the president's ambitious agenda becomes nearly impossible. As unseemly as it may look outside the beltway, both parties do everything they can to try to influence primaries in pursuit of what they see as the greater good - getting as much power as they can to advance their legislative agenda.

At the very least, Romanoff's statement seems to have cost a few folks in the White House a few hours sleep: As 6:25 a.m. this morning, Press Secretary Robert Gibbs put out a statement pushing back at Romanoff's implication that the White House had reached out to him unprompted. According to Gibbs, "Andrew Romanoff applied for a position at USAID during the Presidential transition. He filed this application through the Transition on-line process. After the new administration took office, he followed up by phone with White House personnel."

"Jim Messina called and emailed Romanoff last September to see if he was still interested in a position at USAID, or if, as had been reported, he was running for the US Senate," he continued. "Months earlier, the President had endorsed Senator Michael Bennet for the Colorado seat, and Messina wanted to determine if it was possible to avoid a costly battle between two supporters."

"But Romanoff said that he was committed to the Senate race and no longer interested in working for the Administration, and that ended the discussion," concluded Gibbs. "As Mr. Romanoff has stated, there was no offer of a job."

If that's true, there's not much in the way of substance behind the story. (The White House plans to release Romanoff's USAID job application later today to bolster its position.) That doesn't mean that Republicans will pass up what looks like a golden opportunity to cast the White House as craven politicos representing the worst of what Washington has to offer, of course. Issa, who is doing interviews on the matter today, has released a statement referencing "bare-knuckle Chicago-style politics-as-usual" and suggesting that "whatever the Obama brand use to stand for has been irrevocably shattered by the activities going on inside Barack Obama's White House."

What may have actually been shattered is the Obama White House political team's reputation for competence: As Politico wrote today, it has "stumbled" and "bumbled" its way into questions about whether it has lost its touch.

Consider, first, the sloppiness of the Sestak discussion: the enlistment of Bill Clinton (sure to raise the profile of the story if and when it came out), the failure to make clear to Sestak that he should not talk about the discussion, the suggestion that Sestak could take an unpaid advisory job in the executive branch while remaining in the House, which, as it turns out, wasn't the case. And now the Romanoff matter, with its paper trail and, more importantly, the sort of terrible timing that threatens to transform standard political practice into a damaging narrative.

And keep in mind, neither candidate even dropped out of the race, making all those machinations utterly pointless.

"If THIS is Chicago style politics," says CBS News Chief Political Consultant Marc Ambinder, "Republicans should welcome it, because it seems pretty weak and ineffective."