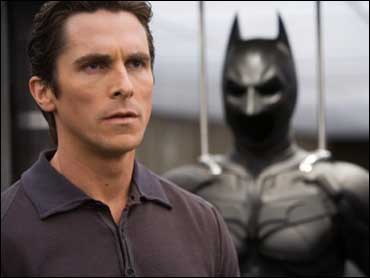 Fans across the country mobbed theaters early Friday for a chance to be the first to see the latest Batman movie, "The Dark Knight."

Media By Numbers, a tracking firm, said the Warner Bros. movie set a box office record for a midnight debut, bringing in $18.5 million Friday from its midnight screening in 3,040 theaters.

Regal Cinemas in New York's Union Square screened the movie every hour on the hour to sellout crowds.

The line stretched around three sides of a city block, but for those serious fans who bought their tickets weeks ago a few hours on the pavement didn't dull their enthusiasm.

"I'm just excited man, it's been a long time," fan Nathaniel Hamilton told CBS News Correspondent Priya David. "They started showing the trailer like seven months ago, so it's like ever since the first trailer, ever since the end of the first movie really we've been raring to go."

"This is more like a 'Dark Knight' comic book, it's a darker version," said another fan, Bobby Kogos, "it's less campy, more serious tone."

This madness won't stop anytime soon and with lines like these around the country "The Dark Knight" is expected to easily break into the top ten grossing films of all time.