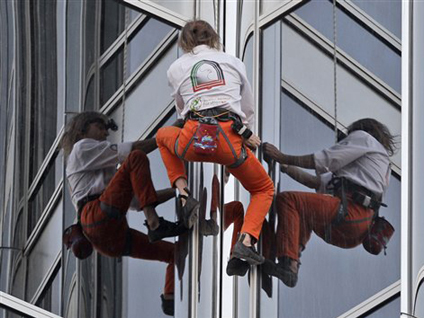 DUBAI, United Arab Emirates - A tiny speck more than half a mile in the air, a French skyscraper climber successfully scaled the world's tallest building Monday, even navigating the tapered spire that extends beyond the top floors of the Dubai structure.

Alain Robert's climb up the 2,717 foot-tall Burj Khalifa, took just over six hours. As night fell, a row of powerful spotlights shone on the side of the tower as Robert climbed.

Unlike on many previous climbs, the 48-year-old daredevil used a rope and harness to comply with organizers' requirements in the Gulf sheikdom that opened the tapering metal and glass tower in January last year. An ambulance, with a stretcher at the ready, was parked alongside other emergency vehicles at the Burj's base.

Robert has climbed more than 70 skyscrapers, including the Empire State Building, Chicago's Willis Tower and the Petronas Towers in Kuala Lumpur, according to his website. He conquered Taiwan's Taipei 101, which before the Burj was the world's tallest building, in 2004.

The tower's owner, Emaar Properties, said the half-mile-high Burj Khalifa has 160 habitable stories. An observation deck is located on the 124th floor.

Viewed from the ground, he appeared as a tiny dot difficult to follow in the darkness.

Emaar called Robert's climb a "momentous" event and said in a statement the climber "scaled the exterior of the tower in a record-clinching feat."

Hours before the climb, Robert told The Associated Press he hoped to go all the way to the top, but acknowledged it would be difficult to go past about 700 meters freehand without the aid of additional equipment, because of the spire's tapered design.

In the end, he scrambled up the spire quickly and hung triumphantly from the top.

Strapped to a safety harness tethered more than 100 stories up, Robert began his climb up the silvery, glass-covered Burj around 6:00 p.m. on Monday. He hoisted himself up along a central column, mostly free of decorative rows of pipes that could slow his ascent.

Robert moved methodically and swiftly along the polished metal facade. He did not appear to use the rope to pull himself up, but instead gripped the glass and narrow metal ridges like a rock climber with his feet and bare hands.

Hundreds of spectators, their necks craned, crowded plazas outside shopping centers and restaurants at the tower's sprawling base.

Robert stayed in a Dubai hotel before the climb, doing push-ups, pull-ups and stretches, and loading up on carb-filled foods such as pasta in a room, overlooking the target of his latest adventure.