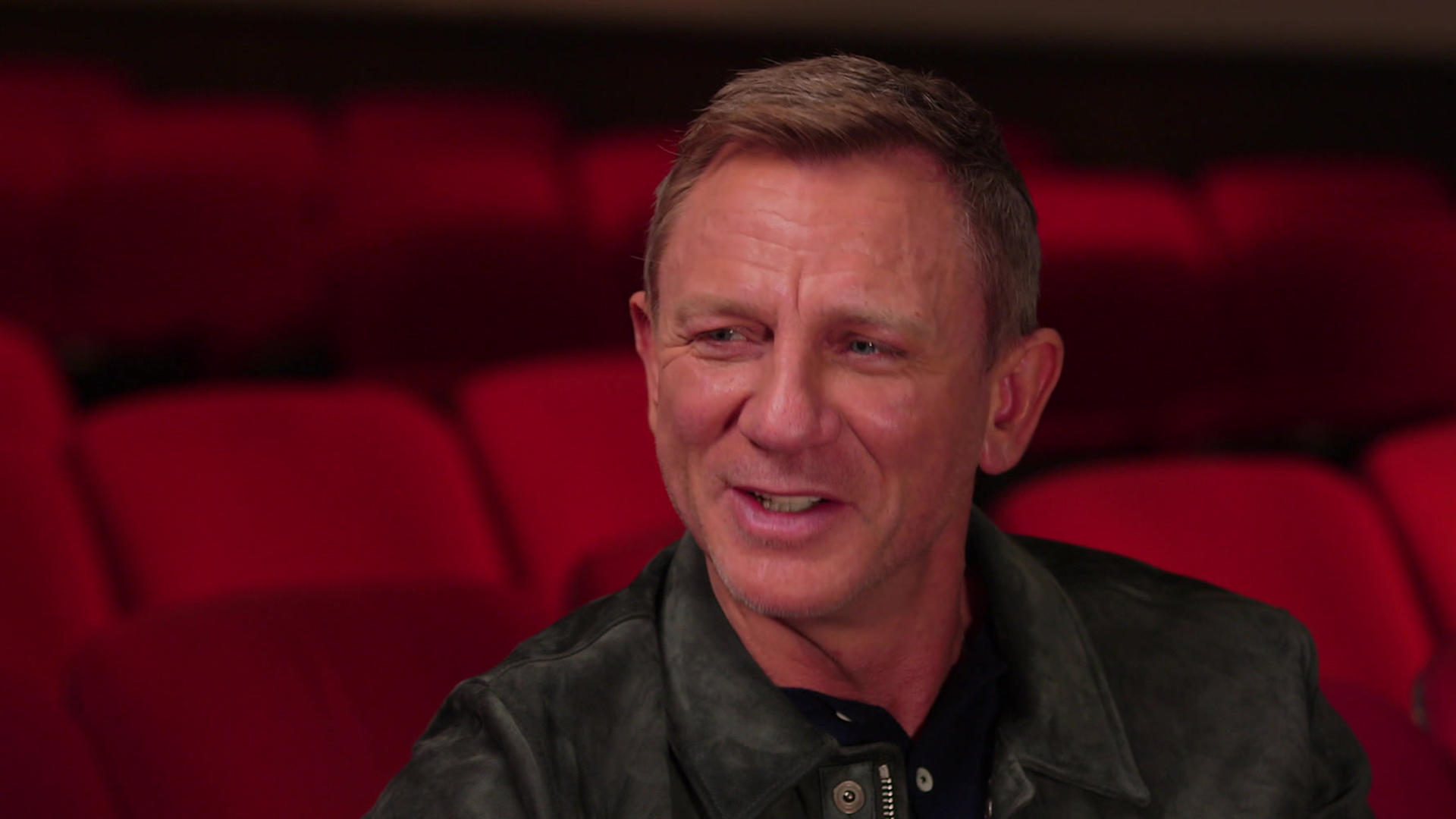 Daniel Craig's body of work is impressive. There's his signature role, James Bond, and more than 40 other movies over a three-decade career on screen. But for the 53-year-old British actor, what matters most is what comes next.

One film, though, has stayed with him: 2004's "Road to Perdition," made before Bond.

Craig and Turner Classic Movies host Ben Mankiewicz watched a scene together, when Craig and Paul Newman went toe-to-toe, in what proved to be Newman's last appearance in a feature film:

Craig said, "I look back on it now, and I just go, 'My goodness me, that was a moment when things changed for me.' Not about my status or my recognition. Something within me went, 'I am allowed to sit at this table.'"

Nineteen years later, his seat is secure, and then some. Just before the pandemic, the Museum of Modern Art in New York City celebrated Craig's career with a retrospective of his work, including the films "The Mother," "Enduring Love," "Munich," "The Girl With the Dragon Tattoo," and "Knives Out," in addition to "Casino Royale" and "Skyfall."

Mankiewicz asked, "As an artist, what does that feel like?"

"I'm a little bit bemused, to tell you the truth," Craig replied, "because it felt, it genuinely feels like I started doing this yesterday."

Craig's mother, an art teacher, encouraged her son to follow his dream of becoming an actor. He started on the stage, but from an early age, he was drawn to the big screen: "I still feel these are slightly sacred places. I can never help myself. There's sort of, if I have a church, this is it. As a kid, you walked into a space and they were gonna turn the lights out, and something magic was gonna happen."

Over 30 years Craig has demonstrated his range. He can be sensitive, as artist Francis Bacon's lover in "Love Is the Devil"; and both ruthless and charming in "Layer Cake," the clever English crime drama that alerted producers he was capable of something much bigger.

Playing Bond was a big step up for Craig. Just a year before, when he heard Steven Spielberg wanted him to play a member of an Israeli hit squad hunting terrorists in "Munich," Craig didn't believe it: "Get a call, 'Steven Spielberg wants to meet you in Paris. Can you be on a train and be there this afternoon?' I'm like, 'Yeah, OK'?  My friend just tells me, 'That's not Steven Spielberg, it's Steven Spielman or someone, some dodgy director!'"

Most recently, he showed off what his Bond co-star Judi Dench calls Craig's "wicked sense of humor" in the black comedy "Knives Out":

Mankiewicz asked, "Would you mind doing the rest of this interview in the 'Knives Out' accent?"

"I don't know if I could!" Craig laughed. "They wanna do another one. And I'm like, I'm terrified. Because it's gonna take me as long to re-learn the accent as it did last time!"

Daniel Craig is comfortable saying "No." After playing Bond in four movies, he said he was done after the last one, "Spectre," from 2015. But he changed his mind, returning for "No Time to Die," the 25th movie in the series.

Business-wise, he's been good for the brand, bringing in nearly $3 billion worldwide at the box office. Still, when he was first offered 007, he said "No": "I did, yeah. I did. I said, 'I couldn't possibly do that.'"

"But you changed your mind?" asked Mankiewicz.

"The general consensus was, 'You'd be a fool not to!'"

But if he was going to take it, he wanted to play Bond his way – a darker and more sober 007 than the heavyweights who came before … men who insisted on their martinis shaken, not stirred.

And when Craig is in, he's all in. Married to the actress Rachel Weisz, Craig acknowledges his total commitment to playing Bond can make him a bit miserable.

"So, that person's around. I think my wife kind of likes it when he leaves!" he laughed. "So, I'm back to kind of, back to relative normality."

Bond began with Sean Connery. Next came George Lazenby, then Connery again, followed by Roger Moore, Timothy Dalton, Pierce Brosnan, and Craig. So, who's next?

Mankiewicz said, "Pierce Brosnan has suggested that whoever the next Bond is be a woman. Idris Elba's name has been floated; he would be wonderful, he's a tremendous actor. James Bond is gonna be played by someone else. You'll watch the movie; are you invested in that decision? Do you care?"

"I care it's someone good," Craig said. "I want them to be great. I mean, I think there's two things. You know, they're sort of like, I think that we need to have better parts for women. And I don't think a woman playing James Bond is the right way. Let's write a brilliant part for a woman!

"Along the same lines, you're not James Bond, you're Daniel Craig. You're a talented actor. Is there one part of Bond that relates to you? Do you drive recklessly, so much so that your wife, like, won't ride with you? Is there some little bit of Bond in you?"

"None of those things!" Craig laughed. "I don't go skydiving at the weekend!"

No skydiving, but for Daniel Craig, things are definitely looking up, as Bond … and beyond.

He said, "And now that it's now come to an end, I've never tried to do jobs as a reaction to it. I think that's another thing: I'll sort of go and do something that's completely the opposite.  I've just tried to continue doing the job, work with the people I wanna work with, and do the work. So, you know, fingers crossed, I'm gonna be able to do other things."

"You know, Connery did five, he left, then he came back, right? No chance?"