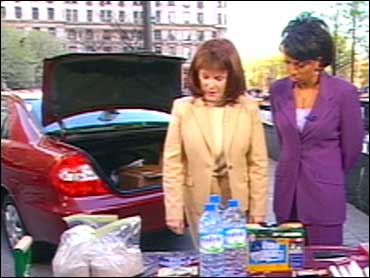 Having a car helps us manage our lives better in many ways, but there are some dangers for women who are on the road alone.

In the May issue of "Cosmopolitan" magazine, Candice DeLong, a former FBI agent and criminal profiler, tells women how to protect themselves against predators. She reviewed those tips Monday on The Early Show,
saying young women are most susceptible to predatory behavior.

"Younger women tend to trust more easily," she said. "They're not suspicious and they should be. And also they tend to do whatever a man will tell them to do. And predators will command women to do things."

So if you find yourself in a dangerous situation, DeLong said, "If it were me, I would take my chances, even if the person has a gun, and is threatening me to get in the trunk, I would run away. I would run away in a zigzag pattern," she said.

Running in zigzag is important because it is hard to hit a moving target, she noted.

DeLong said a predator "will often put a gun in your ribs and sometimes just their finger and say do as I say and I won't hurt you. Don't buy it.

"The time to save yourself during an abduction is during the actual abduction phase. The predator wants to take you somewhere else. Run away, zigzag pattern, yell 'Fire,' yell 'Help.' Get away. Do not get in that trunk," DeLong said.

If you do end up in the trunk, she demonstrated how to get out of it.

She also offered the following tips to avoid being in danger in the first place:

Here are the items she said women should be in their car: