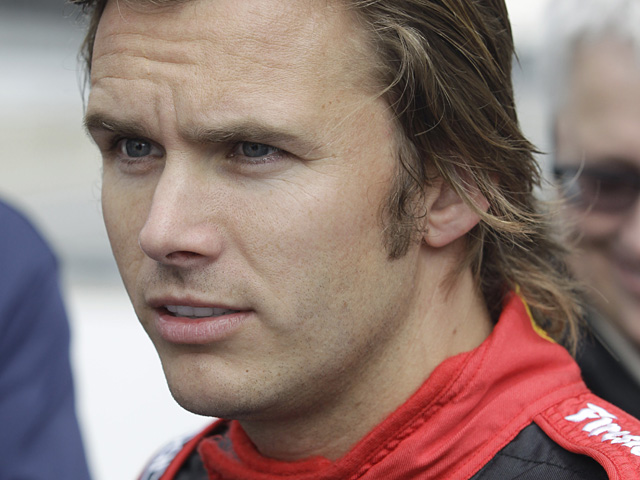 Dan Wheldon was killed when his head hit a post in the fencing at Las Vegas Motor Speedway — contact that created a "non-survivable injury" to the two-time Indianapolis 500 winner.

The cause of death was revealed Thursday when IndyCar presented its findings of the Oct. 16 accident in the season finale. The crash collected 15 cars, including Wheldon, who came from behind the initial contact, launched over spinning cars and sailed approximately 325 feet into the catchfence.

Although the contact with the post killed Wheldon, the investigation determined several factors contributed to what became a "perfect storm."

Perfect storm of factors in deadly IndyCar crash
Danica Patrick on IndyCar crash: "It was like a movie scene"
Dan Wheldon: 1978-2011

"The accident was significant due to the number of race cars damaged, but more importantly due to the non-survivable injuries to Dan Wheldon," the report said. "While several factors coincided to produce a "perfect storm," none of them can be singled out as the sole cause of the accident.

"For this reason, it is impossible to determine with certainty that the result would have been any different if one or more of the factors did not exist."

The race had a season-high 34 cars, but IndyCar CEO Randy Bernard said Thursday the field could have had as many as 37 drivers based on the size of both the track and the pit lane. The season finale was held on Vegas' high-banked 1.5-mile oval with multiple racing grooves, which IndyCar president Brian Barnhart said created "nearly unlimited movement on the track surface under race conditions."

That, not the construction of the fencing, played a larger role in Wheldon's death.

Las Vegas is owned by Speedway Motor Sports Inc., and the organization has spent considerable money on research into fencing. SMI owner Bruton Smith is adamant his fences are the strongest and safest in the business, and he makes no apologies for constructing them with the posts inside the wiring.

Barnhart said there is no indication Wheldon would have survived had the post been on the outside of the mesh wiring.

"It does not look like the position of the mesh fabric would have changed the outcome," Barnhart said.

Wheldon was making just his third start of the season and chasing a $5 million incentive offered by Bernard to any non-IndyCar regular who could drive from the back of the field to win the race. Wheldon would have split the money with a fan selected in a random drawing.

Allowing Wheldon to take the challenge was a stretch — he won 14 races on ovals, including the Indy 500 earlier last season — but because he sat out the season, he technically qualified for the bonus.

But Wheldon felt he was up for the challenge.

He was the in-race reporter for ABC during the event, and spoke with the announcers during the warm-up laps. In a brief interview, Wheldon defended his participation and the entire IndyCar Series.

"I wouldn't be doing this if I didn't think that I could win," he said from his car. "Certainly I am not underestimating the talent of the other drivers in the field. I think IndyCar has got a phenomenal field right now."

Wheldon was killed minutes later when the crash began ahead of him at the start of the 12th lap. He had picked his way through the field and gained at least 10 spots when he came upon the accident and had nowhere to go to avoid the spinning cars and flying debris.

Questions remain about Las Vegas' future on the IndyCar schedule.

Bernard had a three-year lease agreement with the track to stage the season finale at Las Vegas through 2013 but came to an agreement with SMI last week to buy out next year's portion of the contract.

"I think Las Vegas is a great city, a resort destination and the fans and the sponsors — everyone loves the city," Bernard said. "But I don't want to go back there if the conditions aren't right for our race cars."

Barnhart said it's imperative for IndyCar to establish guidelines for the drivers to follow going future on surfaces such as Las Vegas.

"We need to create a limit," he said. "They have to understand there is a line they can't cross."

IndyCar plans on judging all high-banked ovals individually going forward and said the Wheldon accident could not be blamed on the banking. That leaves room for a deal to be worked out with Texas Motor Speedway, one of the most popular venues on the IndyCar schedule.

No sanctioning agreement between Texas and IndyCar has been worked out, but Bernard indicated he'd like to have the 2012 schedule announced by Friday.