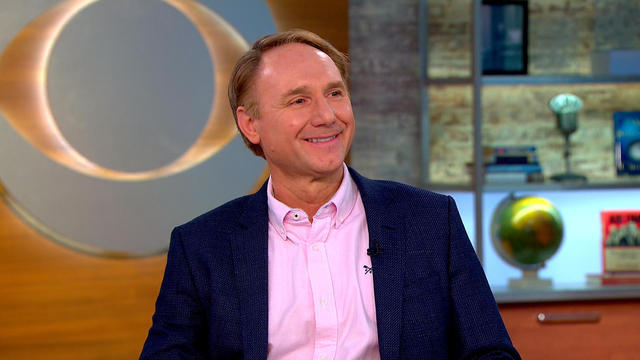 Dan Brown's best-selling series of Robert Langdon mysteries, including the blockbuster "The Da Vinci Code," have sold more than 200 million copes around the world.

His latest thriller, "Origin" (Doubleday), features the return of the symbologist Langdon searching for answers to two fundamental questions of human existence: Where did we come from, and where are we going?

On "CBS This Morning" Monday, Brown said that God and technology regularly factor into his books.

"It's kind of a personal journey to try to reconcile the two against each other."

Artificial intelligence plays a major role in the book.

The lore of magazines as a window on the world
More

"I love all technology, but AI is something that fascinates me deeply, mainly because scientists can't agree on whether it's going to save us or kill us," he said.

"A lot of scientists feel that we're on the verge of a new Renaissance, that AI will solve the big problems of humanity -- scarcity, overpopulation, pollution. And yet, a lot of scientists feel that it's so powerful it will destroy us. And as evidence they remind us that our species has never created technology that we have not weaponized, and it would be naïve to think that AI will be any different."

One of the book's characters is Winston, a piece of artificial intelligence constructed to help guide Langdon through the mystery he seeks to solve (or, is it?).

Brown is not agnostic about the dangers posed by artificial intelligence: "The thing that's going to make artificial intelligence so powerful is its ability to learn, and the way AI learns is to look at human culture. Everything we do now is digitized -- all of our books, all of our podcasts, all of our little YouTube videos, our emails. So, it's possible for a computer to read all of that and learn how humans interact and how they make decisions.

"And the question is, is our culture the best role model for a new consciousness and new intellect? If it learns to be like we are, it's going learn a lot of compassion, but it could also learn a lot of self-centered evil."

Brown talked to both scientists and theologians while researching the book. "Technology is changing the way we interact as humans," he said. "When I grew up, my miracles were the virgin birth, the resurrection. And nowadays you talk to most kids about the resurrection and it doesn't really register. Their miracles are whatever Snapchat can do this week or whatever the new iOS can do."

Brown said that it is his curiosity that leads him through the various topics and locations he chooses for his stories -- and he hopes that it piques the curiosity of his readers as well. "I want to inform about things that are interesting to me, and a lot of these things I learn as I go -- modern art for example, the Palmarian Catholic Church [a schismatic Spanish sect with its own Pope], artificial intelligence.

"I'm not going to lie; the most fun of writing these books is just saying, 'Where am I going to write about? Let me go there!' I spent a couple years researching 'Origin.' The opening scene takes place at the Guggenheim in Bilbao, the spectacular museum. These are places that excite me personally, and it makes it very easy to excite a reader about it if I'm enthusiastic."

"The funny thing about the Guggenheim is that Langdon is an art specialist, he's a classicist. He knows about Renaissance art. I decided I wanted to throw him into the world of modern art, mainly because I didn't know a lot of modern art, and I was curious to learn. It's just a hilarious experience of trying to appreciate a wheelbarrow filled with Jell-O and say, 'OK, this is art? Why is it art?'  I will never forget walking through that museum with a curator and seeing a giant canvas, all white except for two little blotches of red in the corner, and saying, like, 'Hey, I could have done that." And this man looked at me and said, 'But you didn't!' That's when I started to understand modern art as concept over artifact. It's more about the idea than the artifact itself.

"So, my goal is that you can't stop turning pages but at the end of the book, you say, 'Wow, now I'm curious about the following 37 topics and I need to go read some more books!"