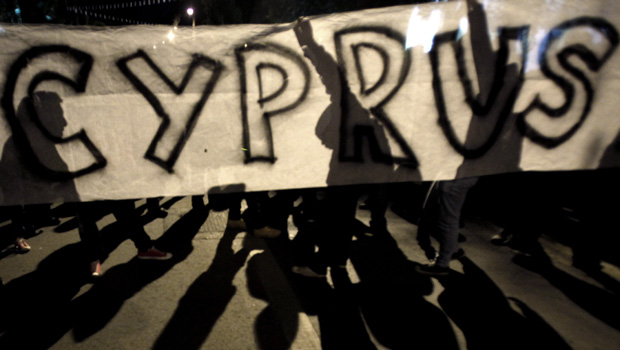 "We've put an end to the uncertainty that has affected Cyprus and the euro area over the past week," said Jeroen Dijsselbloem, who chairs the meetings of the 17-nation eurozone's finance ministers.

In return for the bailout, Cyprus must drastically shrink its outsized banking sector, cut its budget, implement structural reforms and privatize state assets, he said.

The cash-strapped Mediterranean island nation has been shut out of international markets for almost two years. It needs the bailout to recapitalize its ailing lenders and keep the government afloat. The European Central Bank had threatened to cut crucial emergency assistance to the country's banks by Tuesday without an agreement.

Without a deal by Monday night, the tiny Mediterranean island nation of about 1 million would have faced the prospect of bankruptcy, which could have forced it to become the first country to abandon the euro currency. That precedent would have roiled markets and spurred turmoil across the entire eurozone of 300 million people, analysts said, even though Cyprus only makes up less than 0.2 percent of the eurozone's $13 trillion economy.

The finance ministers accepted the plan reached in 10 hours of negotiations in Brussels between Cypriot officials and the so-called troika of creditors: the International Monetary Fund, the European Commission and the European Central Bank.

"The agreement reached today on Cyprus provides a comprehensive and credible plan to deal with the current economic challenges in the country," said Christine Lagarde, the managing director of the IMF, in a statement on Sunday. "The plan focuses on dealing with the two problem banks and fully protecting insured deposits in all banks. It addresses upfront the core problem of the banking system through a clear strategy that ensures debt sustainability and does not excessively burden the Cypriot taxpayer. This agreement provides the basis for restoring trust in the banking system, which is key to supporting growth."

Under the plan, Cyprus' second-largest bank, Laiki, will be restructured and holders of bank deposits of more than $129,760 will have to take losses, Dijsselbloem said, adding that it was not yet clear how severe the losses would be.

"This will have to be worked out in the coming weeks," he added, noting that it is expected to yield $5.45 billion overall. Analysts have estimated investors might lose up to 40 percent of their money.

Savers' deposits with all Cypriot banks of up to $129,760 will be guaranteed by the state in accordance with the EU's deposit insurance guarantee, Dijsselbloem said. Laiki will be dissolved immediately into a bad bank containing its uninsured deposits and toxic assets, with the guaranteed deposits being transferred to the nation's biggest lender, Bank of Cyprus.

Large deposits with Bank of Cyprus above the insured level will be frozen until it becomes clear whether or to what extent they will also be forced to take losses, the Eurogroup of finance ministers said in a statement.

Dijsselbloem defended the creditors' approach to make deposit holders take heavy losses, saying the measures "will be concentrated where the problems are, in the large banks."

The international creditors, led by the IMF, were seeking a fundamental restructuring of the outsized financial system, which is worth up to eight times the country's gross domestic product of about $23 billion. They said the country's business model of attracting foreign investors, among them many Russians, with low taxes and lax financial regulation has backfired and must be upended.

For Cyprus, the drastic shrinking of its financial sector, the loss of confidence with the recent turmoil and the upcoming austerity measures means that the country is facing tough times.

"The near future will be very difficult for the country and its people," acknowledged the EU Commission's top economic official Olli Rehn. "But (the measures) will be necessary for the Cypriot people to rebuild their economy on a new basis."

To secure a rescue loan package, Nicosia had to find ways to raise several billion dollars so it could qualify for the $13 billion bailout package. The bulk of that money is now being raised by forcing losses on large deposit holders, with the remainder coming from tax increases and privatizations. The creditors had insisted that Cyprus couldn't receive more loans because that would make its debt burden unsustainably high.

A plan agreed to in marathon negotiations earlier this month called for a one-time levy on all bank depositors in Cypriot banks. But the proposal ignited fierce anger among Cypriots because it also targeted small savers. It failed to win a single vote in the Cypriot Parliament.

In an illustration of the depth of the fear of a banking collapse, Cyprus' central bank on Sunday imposed a daily withdrawal limit of $129.76 from ATMs of the country's two largest banks to prevent a bank run by depositors worried about their savings.

Cypriot banks have been closed this past week while officials worked on a rescue plan, and they are not due to reopen until Tuesday. Cash has been available through ATMs, but long lines formed and many machines have quickly run out of cash.

The Cypriot government also voted a set of laws over the past week to introduce capital controls, to avoid a huge depositor flight once its banks will reopen.

After the eurozone's finance ministers' approval, several national parliaments in eurozone countries such as Germany then must also approve the bailout deal, which might take another few weeks. EU officials said they expect the whole program to be approved by mid-April.