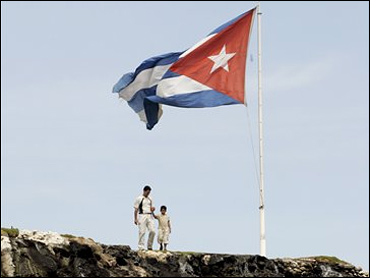 
Havana held a relatively toned down celebration for one of the Revolution's top anniversaries, the "Day of National Rebellion" Tuesday. Foregoing the usual massive outdoor rally, President Fidel Castro told an invited audience of some 5,000 of his loyalists in the capital's largest theater, the Karl Marx, that better times were coming.

Cubans following the nearly four hour speech on their television sets were particularly interested in what he had to say about the economy, particularly since the country's aging electricity system and the wrath of Hurricane Dennis earlier this month has plunged them into lengthy blackouts amid a record heat wave.

"I only ask that you have a little understanding," Castro declared, claiming thermoelectric plants have been repaired and current investments will double the country's generating capacity by the second semester of 2006.

Prior to the speech Mariela Diez, a 53-year old State-office worker and staunch Castro supporter, admitted that she and her neighbors have been having a hard time sleeping through temperatures hovering in the mid-nineties.

Cuba's obsolete electricity system was struggling to meet demand even before Hurricane Dennis struck the island earlier this month downing 36 high tension towers and over a thousand electric poles. Since then lengthy blackouts of up to 12 hours have left fans motionless and ice, or even cold water, at a premium.

After listening to the speech, Mariela said, "I don't know what to think. He spoke with great confidence and continued to make promises but so many that he has made recently are still unfulfilled."

"Fidel told us blackouts were going to be part of the past," said a university professor who asked not to be identified.

She was referring to a series of speeches dating back to March in which the Cuban leader heralded improvements in living conditions beginning with the electricity supply.

"He raised our expectations and we've been badly let down," she said, adding, "Fidel has always told us the truth, even when the news was bad. We're not used to be told everything is fine when its not."

Nevertheless, Castro was not entirely upbeat about the electricity situation, noting "there are still risks, that's only logical. I can't say there is total security ... but everything is moving in the direction of solutions."

"At least we can expect the lights not to go out during these three days," declared Caridad, a teacher, referring to the government announced holiday that runs through Wednesday.

The Cuban leader, who will celebrate his 79th birthday next month, also told his cheering audience that the country is advancing in 13 sectors of the economy.

"The economy grew 7.3 percent in the first semester," he declared, adding that it should end the year with a growth of 9 percent. "We're not playing with figures...the only ones who won't understand this suffer from political blindness."

Before launching into what is traditionally a highly anticipated State of the Union address, the Cuban leader lashed out at the Bush administration, under which the long running dispute between the two countries has peaked.

He said the period prior to tonight's anniversary of his 1953 attack on the Batista regime's largest garrison, heralded as the beginning of the revolutionary struggle, has "been characterized by a special aggressiveness on the part of the Bush administration against our nation. The extreme Right, Nazi, and fascist leadership that took over the empire, has not stopped bashing its impotent hate against our nation."

Castro also criticized Washington's support of "mercenary" dissidents and its wasting of $100 million in taxpayers' money in a "crazy, failed endeavor", referring to TV and Radio Marti broadcasts to the island from a military plane. And he scornfully contrasted the large amounts of money spent to undermine his regime to Washington's offer of $50,000 in hurricane aid following the passage of Dennis through the island.

In recent weeks, Cubans in all walks of life and political persuasion have been complaining about the power outages and water shortages, which they say are worse than last summer's, and there have even been unusual protests, some staged by dissidents. People report random incidents of rocks being thrown at electric company offices during the blackouts and of the appearance of anti-government signs.

Two weeks ago the Committees for the Defense of the Revolution (CDR) throughout the capital called on its grassroots membership to step up its vigilance. In local block meetings, neighbors were asked to keep the peace during the celebration of the upcoming national holiday.

"They told us that dissident groups were creating disturbances in some municipalities," explained Camila, a housewife in the Playa neighborhood.

In his speech Tuesday, Castro defended the arrests of numerous dissidents planning to stage public protest. Calling them "traitors and mercenaries", he warned them that they can expect the same response again if they "step one millimeter beyond what the revolutionary people, whose destiny and lives are at risk in the face of the most inhumane empire, are willing to permit."

And taunting his critics, Castro roundly proclaimed, "No other revolutionary process has ever had the overwhelming support and consensus that the Cuban revolution has."