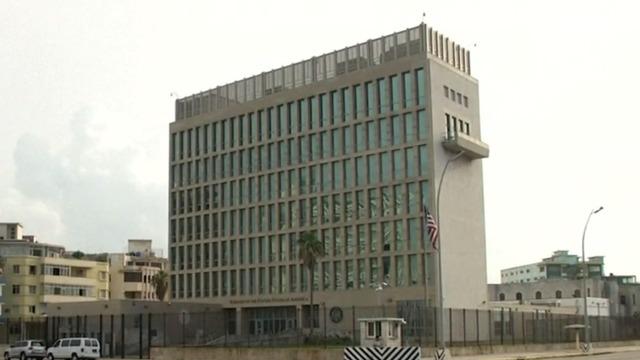 WASHINGTON -- It sounds sort of like a mass of crickets. But not quite. A high-pitched whine, but from what? It seems to undulate, even writhe. Listen closely: Some hear multiple, distinct tones colliding in a nails-on-the-chalkboard effect.

The Associated Press has obtained a recording of what some U.S. Embassy workers heard in Havana, part of the series of unnerving incidents later deemed to be deliberate attacks. The recording, released Thursday by the AP, is the first disseminated publicly of the many taken in Cuba of sounds that led investigators initially to suspect a sonic weapon.

The recordings from Havana have been sent for analysis to the U.S. Navy, which has advanced capabilities for analyzing acoustic signals, and to the intelligence services, the AP has learned. But the recordings have not significantly advanced U.S. knowledge about what is harming diplomats. Officials say the government still doesn't know what is responsible for injuries to its personnel, but the U.S. has faulted Cuba for failing to protect American diplomats on its soil.

The Navy and the State Department did not respond to requests for comment on the recording. Cuba has denied involvement or knowledge of the attacks. However, White House Chief of Staff John Kelly isn't convinced.

"We believe that the Cuban government could stop the attacks on our diplomats," he told reporters at the White House briefing Thursday.

Not all Americans injured in Cuba heard sounds. Of those who did, it's not clear they heard precisely the same thing.

Yet the AP has reviewed several recordings from Havana taken under different circumstances, and all have variations of the same high-pitched sound. Individuals who have heard the noise in Havana confirm the recordings are generally consistent with what they heard.

"That's the sound," one of them said.

The recording being released by the AP has been digitally enhanced to increase volume and reduce background noise, but has not been otherwise altered.

The sound seemed to manifest in pulses of varying lengths -- seven seconds, 12 seconds, two seconds -- with some sustained periods of several minutes or more. Then there would be silence for a second, or 13 seconds, or four seconds, before the sound abruptly started again.

Whether there's a direct relationship between the sound and the physical damage suffered by the victims is unclear. The U.S. says that in general, the attacks caused hearing, cognitive, visual, balance, sleep and other problems.

A closer examination of one recording reveals it's not just a single sound. Roughly 20 or more different frequencies, or pitches, are embedded in it, the AP discovered using a spectrum analyzer, which measures a signal's frequency and amplitude.

To the ear, the multiple frequencies can sound a bit like dissonant keys on a piano being struck all at once. Plotted on a graph, the Havana sound forms a series of "peaks" that jump up from a baseline, like spikes or fingers on a hand.

"What it is telling us is the sound is located between about 7,000 kHz and 8,000 kHz. There are about 20 peaks, and they seem to be equally spaced. All these peaks correspond to a different frequency," said Kausik Sarkar, an acoustics expert and engineering professor at The George Washington University who reviewed the recording with the AP.

Those frequencies might be only part of the picture. Conventional recording devices and tools to measure sound may not pick up very high or low frequencies, such as those above or below what the human ear can hear. Investigators have explored whether infrasound or ultrasound might be at play in the Havana attacks.

The recordings have been played for workers at the U.S. Embassy to teach them what to listen for, said several individuals with knowledge of the situation in Havana. Some embassy employees have also been given recording devices to turn on if they hear the sounds. The individuals weren't authorized to discuss the situation publicly and demanded anonymity.

Cuban officials wouldn't say whether the U.S. has shared the recordings with Cuba's government.

Another big question remains: Even if you know you're under attack, what do you do? Still dumbfounded by what's causing this, the United States has been at a loss to offer advice.

The embassy's security officials have told staff if they believe they're being attacked, they should get up and move to a different location, because the attack is unlikely to be able to follow them, the commenting individuals said. The AP reported last month that some people experienced attacks or heard sounds that were narrowly confined to a room or parts of a room.

At least 22 Americans are "medically confirmed" to be affected, the State Department says, adding that the number could grow. The attacks started last year and are considered "ongoing," with an incident reported as recently as late August.

Cuba has defended its "exhaustive and priority" response, emphasizing its eagerness to assist the U.S. investigation. Cuban officials did not respond to requests for comment for this story but have complained in the past that Washington refuses to share information they say they need to fully investigate, such as medical records, technical data and timely notification of attacks.

The recordings also appear to rule out one possibility for a high-tech weapon: electromagnetic pulses.

The broad array of symptoms reported, including those not easily explained by sound waves, had led to questions of a possible microwave or radio wave device frying body tissue from afar. Research conducted by the U.S. military decades ago showed that short, intense "pulses" of microwaves could affect tissue in the head in a way that was interpreted by the ear as sound, meaning that a microwave device could potentially "beam" sounds directly into people's heads.

If that were the case, the sounds wouldn't show up on a recording.