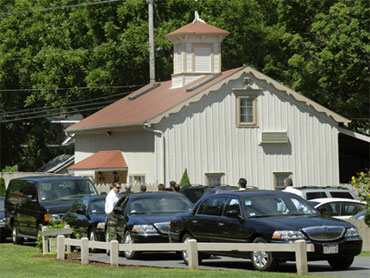 Chelsea Clinton was poised to marry her longtime boyfriend at an exclusive estate along New York's Hudson River after weeks of secrecy and buildup that had celebrity watchers flocking to the small village for the Saturday evening nuptials.

The crowd began forming midmorning after weeks of intrigue and secrecy about a ceremony with a VIP guest list said to include such luminaries as Oprah Winfrey and Steven Spielberg. Actors Ted Danson and Mary Steenburgen were walking hand-in-hand through the village, and fashion designer Vera Wang was spotted outside a restaurant.

The 30-year-old daughter of President Clinton and Hillary Rodham Clinton was expected to wed her boyfriend, investment banker Marc Mezvinsky, at a ceremony with 400 to 500 guests. Details of the wedding were kept fanatically close to the vest, with shopkeepers, innkeepers, vendors and restaurateurs sworn to secrecy.

Officials restricted airspace over the estate, and the area will remain a no-fly zone until 3:30 a.m. Sunday. Roads were also blocked off, and inconvenienced neighbors were soothed with a complimentary bottle of wine.

Shortly before 5 p.m., dozens of men in black-tie attire and women in gowns boarded shuttle buses in the village for the short ride to the estate. About 30 minutes later a motorcade of three black SUVs and a sedan sped through the checkpoint on the road that leads to the historic estate.

In the early afternoon, Danson and Steenburgen strolled through Rhinebeck toward one of the hotels being used for the wedding. Both said they were excited about the upcoming ceremony.

"I knew her since she was a baby so this is a big moment," said Steenburgen, who wed Danson in 1995. "She's a lovely, lovely girl."

Reporters, who had been searching for celebrities in vain for most of the day, quickly zeroed in on the couple, prompting Danson to ask, "Are we the only celebrities in town?"

Donna Vena drove 50 miles to Rhinebeck from her home of Mount Kisco, New York, in the hopes of spotting a celebrity.

"Why not?" she asked Saturday morning, a camera slung over her shoulder. "Big story. Maybe see Oprah."

Nearby, two young women passed out slices of pizza with "I do" written in pepperoni.

Hundreds of people gathered outside the hotel where many of the guests are staying were rewarded Friday night when the Clintons exited a van arm-in-arm outside the Beekman Arms Hotel.

Shortly before 11 p.m., the former first lady, wearing a long green dress, waved to the cheering crowd waiting behind metal barricades and quickly went into the hotel. She left with the former president about a half-hour later.

Earlier Friday, Bill Clinton made an appearance around lunchtime, popping out of a car and walking a few blocks, greeting people on his way to a restaurant. Looking fit and relaxed in blue jeans and a black knit shirt, he gave easy answers to questions shouted by well-wishers and reporters.

The former president's half-brother, Roger Clinton, was spotted early Saturday afternoon with his son Tyler, picking up food at the same restaurant. When asked by reporters if he was excited, Roger Clinton said, "Yes, very excited" as they slipped into a waiting SUV.

The wedding is set to take place at Astor Courts, a secluded estate along the Hudson River built as a Beaux Arts style playground for John Jacob Astor IV more than a century ago. The estate features the sort of commanding view that once inspired Hudson River School painters, as well as 50 acres of buffer space to shield the party from prying eyes.

Chelsea Clinton and Mezvinsky were friends as teenagers in Washington, and both attended Stanford University. They now live in New York, where Mezvinsky works at G3 Capital, a Manhattan hedge fund. Mezvinsky worked previously at Goldman Sachs as an investment banker.

Clinton completed her master's degree in public health earlier this year at the Mailman School of Public Health at Columbia University.

Mezvinsky is a son of former U.S. Reps. Marjorie Margolies-Mezvinsky of Pennsylvania and Ed Mezvinsky of Iowa, longtime friends of the Clintons. His parents are divorced.