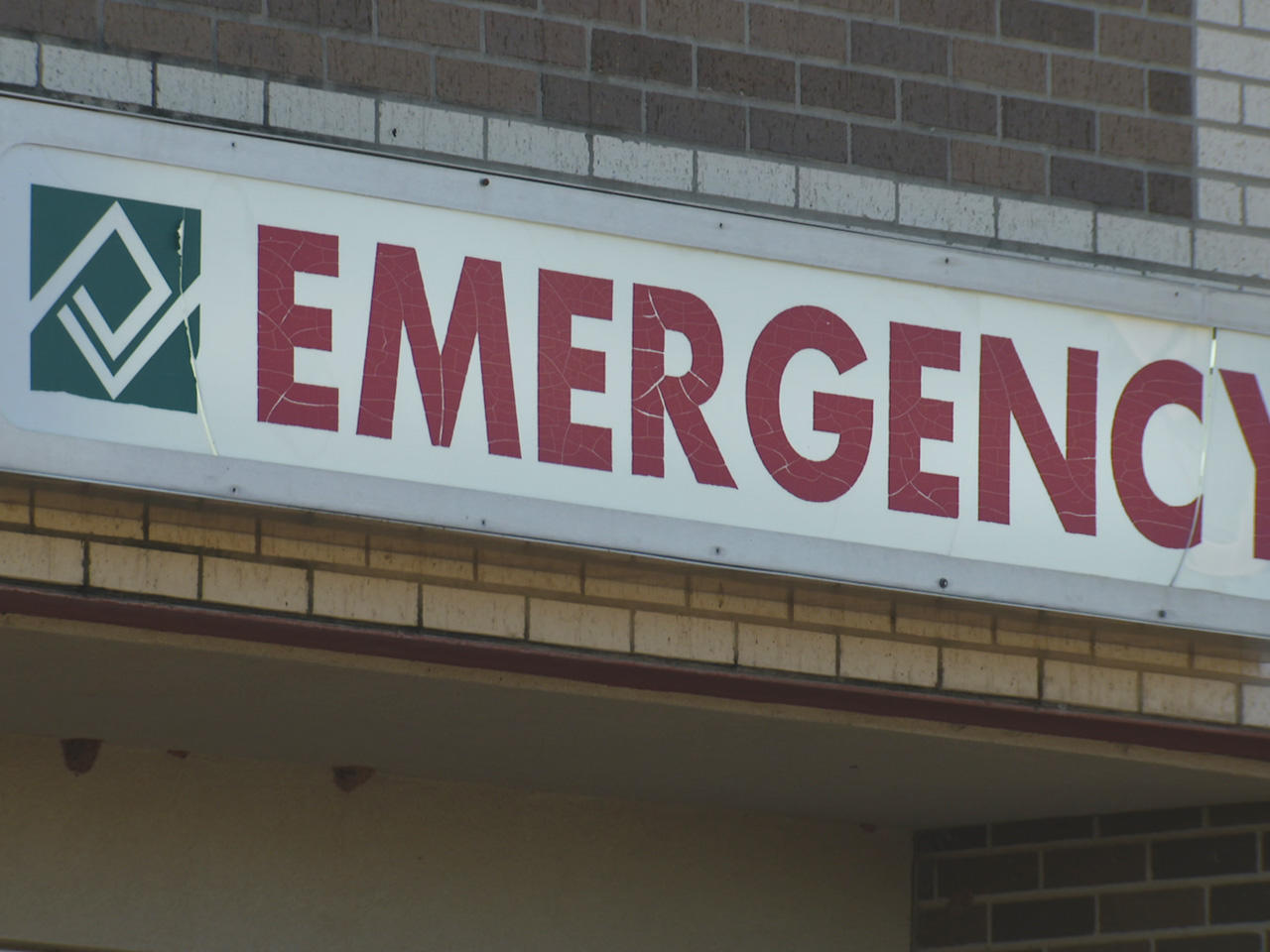 Tonopah, Nevada, is about as isolated a place as you can find – 200 miles south of Reno, 200 miles north of Las Vegas, with one road in or out. But to those who call it home, this scenic dot on the desert landscape once had everything they needed.

Emmy Merrow had no concerns about living in such a remote place: "It had a store and a gas station, and I was fine!" she laughed.

Merrow has lived here for four years. She has a two-and-a-half-year-old, Aleyna, and a newborn daughter, Kinzley.

They moved here when her husband got a great job offer from the sheriff's department. But six weeks before she found out she was pregnant with Aleyna, she also found out Tonopah's struggling hospital, its only hospital, was shutting its doors for good.

"I'm frustrated, I'm mad, I cry, I'm upset about it, because we would live less than a mile away from a hospital," she said.

"And how many does she have a day?" asked correspondent Lee Cowan.

"So, is there anybody within a reasonable distance that can help?

When the seizures are bad enough, which is about every six weeks or so, Merrow has to make a mad, desolate dash to the closest hospital, which is across the border in California, some 114 miles away.

She'll never forget the first time she had to do it: "It was in the middle of the night, so it was dark and I couldn't see her, so I did stop quite often to just check and make sure she was still breathing."

"That must have been terrifying," Cowan said.

"Yeah, I was sobbing the whole way. It is the worst feeling in the world."

Elaine Minges lives in Tonopah, too. She came here with her husband, Curt, for a high-paying job at the nearby solar plant, and thought they'd retire here one day. "We knew that there was a hospital here and there was a few physicians, and we felt comfortable at the time," Minges said.

But after the hospital closed, everything changed. "They shut the doors and that was it," she said.

"And they didn't give you any warning?"

There were rumors, she said, but "we thought no, that won't happen. That doesn't happen. Look, we're out in the middle of nowhere!"

Curt, who had diabetes, tried not to think about it, until one night he suddenly fell very ill. Minges recalled, "He woke up and I thought he was having a heart attack. He was gasping for air. He tried to get up, but he was just too sick."

He was suffering a serious complication from diabetes. It's a condition normally survivable with prompt medical attention, but in this case, prompt meant getting a helicopter. "That particular night, the helicopter was 45 minutes out before they could get to the airport, and in that time, he went into cardiac arrest."

Cowan asked, "Had the hospital here been open, would that have saved your husband?"

It's a grim tale repeating itself all across the country.

Since 2010, 99 rural hospitals like the one in Tonopah have closed; that's almost one a month.

"Basically about half of rural hospitals are losing money every year," said Mark Holmes, a professor of health policy and management at the University of North Carolina, who has been studying the decline for more than a decade.

Cowan asked, "Is there an end in sight?"

"Every time that I've said, 'I think we're through the worst of it,' we've been surprised," Holmes replied. "You always have to wonder, who's next?"

A whole cross-section of America is now facing the very real risk of having no local hospital to turn to. The causes are varied; the population in some of those towns has dwindled to a size that can't support a hospital anymore.

In others, the hospitals are either mismanaged or they end up as table scraps in mega-mergers. Medicaid expansion would have helped some stay open, Holmes says, but not all, and even so reimbursement rates are often too low for hospitals to break even. Whatever the cause, the impact on the community is almost always the same:

"The hospital closes, the emergency room dries up, all the other services that went with that – home health, pharmacy, hospice, EMS – they leave town as well, and now you're left with a medical desert," said Holmes.

That's exactly the fate residents of Pauls Valley, Oklahoma were worried about. The town, about 60 miles south of Oklahoma City, has only one hospital, but the previous management company had run it into bankruptcy.

The city brought in Frank Avignone to save it. When Cowan visited, Avignone was working the phones to find a generous donor to keep it open: "I've got 130 employees here that I'm going to have to tell they have no future," he said.

"It's literally day-by-day for this hospital," Cowan asked.

"It's minute-by-minute," he replied.

"How much money do you have in the bank right now?"

"Which gets you how far?"

"The next 15 minutes. I mean, it's not enough to really make a difference."

Townspeople rallied, especially those who had been treated here, like Susanne Blake. She and her husband pitched in half of their retirement savings – a gamble that to them, made some good-natured sense. "We got tickled about how much we should give, because he said, 'Well, without a hospital, we don't have to worry about as long a retirement!'" she laughed.

Employees were just as passionate. Linda Rutledge, who's worked in the hospital's cafeteria for nearly 20 years, baked over a thousand cookies – a bake sale with a lot riding on it.

But it can happen. And last year, in response to the need for medical care, a massive free health clinic popped up at a fairgrounds in Gray, Tennessee, set up by a non-profit called Remote Area Medical – originally founded to serve third-world countries.

But Chris Hall, the charity's COO, says a rural hospital closure back in 1992 forced the organization to address the medical needs of the underserved here at home, too.

"Today alone, there's seven states' worth of patients that have come to this event," Hall said. "People have gotten in their car and driven 200 miles to get here today just to be able to get a service that they couldn't get in their local area, or [couldn't] afford in their local area."

Some who lined up overnight in the cold did in fact have a hospital; they just didn't have the insurance to access it. But for others, like Leanna Steele, this is the closest thing they have to an emergency room. Her local hospital, which she used to go to when she got debilitating migraines, also closed.

Usually before a hospital closes entirely, administrators will try cutting back on non-emergency services, like maternity wards. That's happened so often that more than half the rural communities in this country now no longer have labor and delivery units, leaving expectant mothers facing long drives at the worst of times.

But in Lakin, Kansas, population 2,200, they tried something different. The only hospital for miles decided to invest in obstetric care instead, the thinking being that babies can be a growth industry. They get patients in the door, and just as Kearny County Hospital's young CEO Ben Anderson had hoped, they stay … and bring along the rest of the family, too.

And that's just what's happened. Dr. Drew Miller has a bulletin board outside his office with pictures of the future patients he's brought into this world – almost 500 in the last eight years, from all across the state.

"The most rewarding thing of what I get to do is take care of families of multiple generations" Dr. Miller said. "I could tell you stories of people I've delivered their babies, and taken care of their grandma or their great-grandma. That's what I love about what I get to do here."

And another thing: There are no high-priced specialists employed here, not even an OB-GYN. Instead, the hospital is staffed entirely by physicians trained in full spectrum family medicine instead. "We determined we only have so many dollars to spend at a rural critical access hospital on medical care staff coverage, so it's important that everybody is trained to do the same thing, and it's important that everyone is willing to do it equally," Anderson said.

A typical day for these rural doctors can include doing a colonoscopy in the OR in the morning, and removing a skin lesion at a clinic in the afternoon. It's a flexible, can-do approach to rural medicine that has kept these hospital doors open – at least for now.

"This last year we had the first profitable year in probably two or three decades," said Anderson. "But we're riding very, very close. We don't have the margin for mistakes."

It's that razor's edge that hospitals like the one back in Pauls Valley, Oklahoma, had ridden for too long. Cowan was there when CEO Frank Avignone brought the staff together to share some news: "You can only live on borrowed time so long," he said. The hospital was closing, immediately.

"I'm not sure people really understand what's going on," Avignone told Cowan. "The story's gotta get out. People have to see the faces of the folks in this community and the employees and what they've been through. People die because this hospital won't be open."

Back in Tonopah, Nevada, Emmy Merrow understands those risks firsthand after one excruciatingly long drive to a hospital with Aleyna that had irreversible consequences. "She fell into a seizure that lasted three hours long; it lasted the whole entire trip," she said. "So, she has brain damage from that. She wasn't breathing correctly, she lost oxygen."

"I think people watching this are going to wonder, if it's that bad, and you're so far away from a hospital, and you need help basically all the time, why not move?" asked Cowan.

As for Elaine Minges, with her husband now gone, the rural life they loved so much is gone, too, and like so many who live in small-town America, she's at a loss for what to do next.

Cowan asked, "Will you stay here knowing there's not a hospital?"