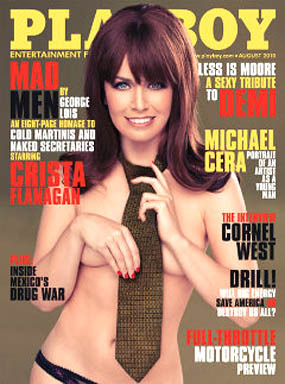 The actress who plays the switchboard operator Lois Sadler on AMC's '60s-era drama was asked by the magazine to pose in re-creations of scenes out of the 1960s editions of the men's monthly. And she obliged.

"I'm a character actress,"says Flanagan to Playboy. "The parts I play, I'm usually a crazy heroin addict or a lunch lady. Nobody's ever asked me to take off my clothes, or even kiss somebody."

According to the New York Daily News, Flanagan will appear on two covers of the August issue of Playboy and be featured inside an eight-page centerfold that keeps the "Mad Men" theme. The magazine even comes with classic reproductions of ads from the period.

"I really did feel like I was re-creating something and that I was bringing to life these women who already posed for Playboy in the '60s," Flanagan says. "If I tell a friend I did this, they think I'm completely naked. ... This was not Crista filling your wish list out. This was trying to capture an era."