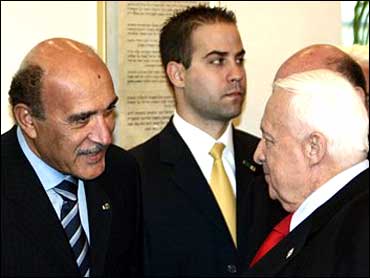 Israel's parliament voted against the state budget Wednesday, triggering a political crisis that could topple Prime Minister Ariel Sharon's government and stall his plan to pull out of Gaza and part of the West Bank next year.

Shortly after the vote, Sharon dismissed Shinui, his main coalition partner from the government for voting against the budget. At the parliament, Shinui ministers showed reporters their one-sentence dismissal notices. They take effect Saturday evening.

Sharon himself brought the situation to a head, calling the first of three votes on the budget, knowing it would fail — giving him a chance to reshuffle his shaky minority coalition. But it was a risky move, possibly leading to a general election, which would stall or kill the pullout.

With his government in tatters because of internal opposition to the pullout plan, Sharon was unable to garner a majority in favor of the budget, losing 69-43.

The Shinui Party, which pushes for secular rights, voted against to protest Sharon's pledge of hundreds of millions of dollars in allocations for Shinui's arch-rivals, the Orthodox Jewish parties, to win their support.

After dismissing Shinui from his government, Sharon planned to invite the moderate Labor Party and at least one ultra-Orthodox Jewish party to replace it.

That would give Sharon a parliamentary majority of about 66 of the 120 seats for the first time since the summer, when pro-settler parties quit the government to protest the pullout plan.

Since then, Sharon has needed the backing from the opposition of Labor, his natural rival, which has backed far-reaching territorial concessions for years and strongly supports the "unilateral disengagement" plan.

However, Labor, which has socialist roots, voted against the budget, objecting to cuts in welfare spending and social programs.

This presents Sharon with a complicated political situation, complex even by labyrinthine Israeli political standards. If he fails to reconstitute his coalition, it could fall in a no-confidence vote, triggering a months-long process of campaigning and elections that would put everything else on hold — including the Gaza and West Bank withdrawal.

Rebels in Sharon's Likud Party oppose the pullout plan, as do Sharon's traditional backers among the Orthodox Jewish public and other hard-liners on the Palestinian issue.

Sharon himself was a stalwart supporter of settlement expansion for decades, did an abrupt about-face when he presented his plan a year ago, calling for removal of all 21 Jewish settlements from Gaza and four from the West Bank.

Sharon is saying that the pullout must be Israel's top priority, crossing the usual party lines. This would mean that his traditional dovish rivals would have to back his government and keep it afloat, despite strident opposition from Sharon's own camp.

Bringing Labor into his government would help sustain a majority for the pullout, but the fight over the budget would continue. If the government does not pass a budget by March 31, it must resign.

Sharon and Labor served together in Sharon's first term as prime minister from 2001-2003, but Labor quit over the issue of funding for settlements, triggering another election.