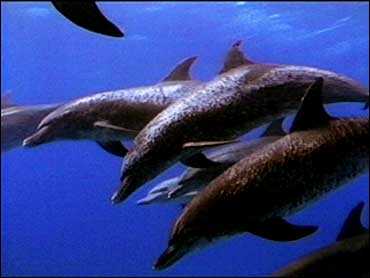 The video obtained by an Ibama researcher and broadcast by Globo TV showed the fishermen netting the dolphins, which suffocated because they could not surface to breathe.

The researcher was contracted by the agency and sent undercover aboard the fishing boat to monitor hauls of other fish. The dolphin kill was filmed while the boat was off the coast of Amapa state, near the point where the Amazon River flows into the Atlantic Ocean.

As the dolphins were hauled from the sea and piled on the boat's deck, fishermen on board laughed after someone said, "Everyone's going to jail after this filming!"

No one has been charged or fined because authorities were still trying to identify the fishermen caught on video, Globo reported.

Ibama confirmed the Globo report that aired Monday night, but said Tuesday that no one was immediately available to provide additional details. It was not immediately clear whether the researcher or a crew member filmed the dolphins being killed.

Fishermen who illegally snag dolphins usually sell the meat to other boats that use it to haul up sharks, Globo TV said.

The images appalled groups trying to protect dolphins around the world.

"Brazil has strict laws to protect whales and dolphins in their waters, and they are very clearly being abused," said Claire Bass, program manager for marine mammals with the London-based World Society for the Protection of Animals. "Using nets to kill these extremely sociable and intelligent animals by drowning them is completely diabolical."

Dolphins are also caught off the coast of Africa for shark bait, she said.

Emma Butler, spokeswoman at Britain's Whale and Dolphin Conservation Society, said she had thought until seeing the video that the Latin America practice of killing dolphins in the ocean for use as bait had been "consigned to history."