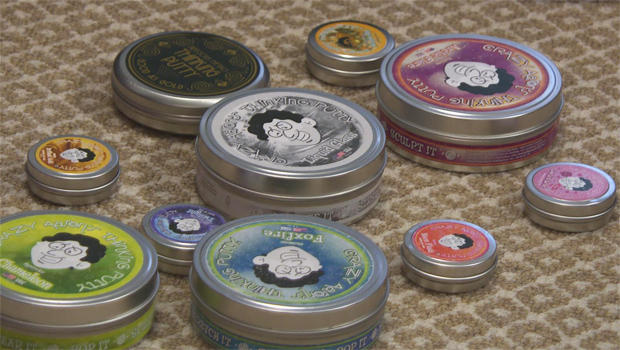 Here is one of three unlikely success stories from Susan Spencer:

It’s no stretch to say that Aaron Muderick is stuck on putty.  “It feels great in your hand,” he said. “You can play with it for hours!”

His first love was classic Silly Putty, but that soon got old.

“I started researching, is there a way to make this more beautiful? More fun?” he told Spencer.

Which is how Muderick, a computer scientist-by-day, became a mad scientist-by-night. Borrowing some textbooks from a friend who had just finished getting her Ph.D. in chemistry, he said, “I taught myself enough chemistry to create Thinking Putty!”

Crazy Aaron’s Thinking Putty, that is. Puttering with putty, he experimented with colors and textures in his basement, then took it to work. “I would bring in a box, keep it under my desk of my various newest creations, and people would come over and they would say, ‘Hey, can I get a half-pound of orange?’”

“I would put it in a Ziploc bag and off they would go!”

Soon he launched a website. Then he hit the front page of the Wall Street Journal, in a feature on fidgeters who play with putty.

So who was his target audience? Adults, “people working at a desk just like me.”

But today, fans of all ages are putty in his hands.

On any given day, you’ll find 25 tons of the silicone rubber oozing around his factory near Philadelphia. The more than 50 varieties include metallic colors and glow in the dark. At up to $15 a tin, putty is a multi-million dollar worldwide business. His besteller? “Liquid glass” -- clear putty.

“You can bounce it, you can stretch it,” Muderick offered.

He also demonstrated his magnetic putty.

But perhaps his most magical moment was his decision to hire people with physical and intellectual disabilities -- some 800 of them.

“We were able to make it work,” he said. “You have pepel who really love what they do, and now you have a loyal team.”

A very nice twist to an unlikely success story.

Spencer asked, “When somebody asks you what you do for a living, what do you say?”

“Putty-maker,” he replied. Or, “Professional kid. I like that. I’m gonna use that.”